I don't have an apple phone so haven't a clue how long this info has been doing the rounds. 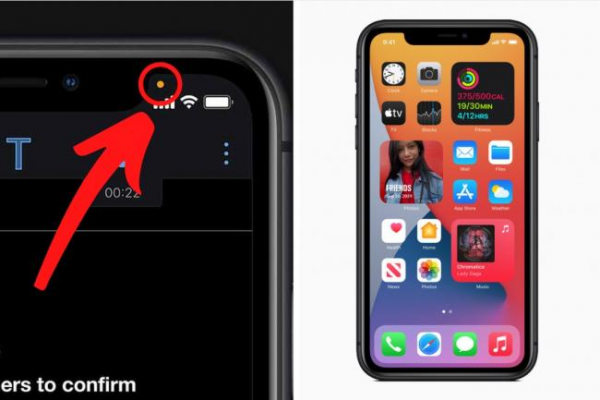 Apple users who have downloaded the new iOS software update on their iPhones have been warned about a mysterious 'orange dot' that appears on the top right hand corner of the screen.

We've put together what you need to know.

What is the 'orange dot' - and why does it appear on the screen?

Following the new iOS 14 software update, which was rolled out to Apple products including iPhones and iPads across the UK and around the world on Wednesday, September 16, many users have been quick to notice the strange dot appear on the screen.

The 'warning dot' that appears at the top of your iPhone is there to indicate whenever your microphone or camera is activated by an app.

In addition to the orange dot showing on screen, users will also be able to get privacy information on the App Store to help further understand the privacy practices about every app before
they downloaded it.


What have Apple said about the 'orange dot'?

In a statement about the orange dot and the iOS 14 update, Apple said: "An indicator appears at the top of your screen whenever an app is using your microphone or camera. And in Control Center, you can see if an app has used them recently."

Apple users will then be able to check the app's permissions within the Settings section, and can deny apps access to your microphone or camera - or they have the option to delete the app altogether.

"Privacy is a fundamental human right and at the core of everything we do. That's why with iOS 14, we're giving you more control over the data you share and more transparency into how it's used," Apple added.

What else has changed as a result of the iOS 14 update?

Following the roll out of the new iOS 14 software on iPhones and iPads, Apple users will now be able to continue watching videos or FaceTime call others while using another app.

Very interesting. I’m on apple but haven’t downloaded the newest iOS - not that I’ve got space for it.... I’m very particular about privacy (hence we won’t have anything like Alexa or a dot in the house) so this is interesting but also probably quite concerning.

Mrs Hagrid has a hauwei and had the issue where if you covered the camera it would stop working. Very dodgy in my mind.

There's a simple rule with all this, if you have a mobile phone they're tracking you, it's easy to stop this, don't carry a mobile phone, smart watch or similar.

Hagrid said:
Mrs Hagrid has a hauwei and had the issue where if you covered the camera it would stop working.
Click to expand...

If you cover a normal camera it will stop working.

Smileyr8 said:
There's a simple rule with all this, if you have a mobile phone they're tracking you, it's easy to stop this, don't carry a mobile phone, smart watch or similar.
Click to expand...

I agree but you can limit it to a certain degree, don't install apps you don't need and uninstall ones you don't use, look at the permissions you give when installing them.

My thoughts are that apple are now highlighting this is happening, whereas in the past it was hidden.
A thumbs up for me for privacy, and indicating there may be a sneaky app.

Chippy_Tea said:
If you cover a normal camera it will stop working.
Click to expand...