That’s an awful lot of conjecture and partial information with little to back it up Peebee. E.g a lot of fruit is mainly water but I don’t see many people complaining when they buy a punnet of raspberries that they are 87% water (what parts are essential to the flavour - very little in terms of percentage) and Maillard reactions are not just dependent upon temperature but also on pH (it’s why you can cheat caramelising onions etc by using a controlled amount of baking soda).
I think you need to try making some home made invert by a couple of different methods and see what outcomes you get.

F00b4r said:
That’s an awful lot of conjecture and partial information with little to back it up Peebee. ...
Click to expand...

But that is what I'm intentionally doing. Meeting an awful lot of conjecture and partial information ... head-on! And hoping something better will come of it.

I'm not being an opinionated bigot! You only have to look back a couple of weeks in this thread to see me "towing the line". But when things stop adding up, I have a habit of questioning the popular idea, not blinkering myself to uncomfortable truths.

I don't mind raspberries containing 87% water, but I do get naffed off if someone tries to fob off the same raspberries with 92% water. (Something like it is done with chicken).


Haven't tried the caramelised onion trick with baking-soda. I'll be giving that a go

peebee said:
I created 280g of my "base" composed of golden syrup plus 4g blackstrap molasses. It's surprising how much colour such a small (1.2%) amount of blackstrap makes to the syrup. It's purpose is to provide a hint of raw sugar to the otherwise highly refined golden syrup (supermarket own brand, not Tate's which may still be made from raw ingredients - I've yet to check). The molasses also takes the colour to near No.2 Invert (perhaps a tad lighter?).

The dish went into the oven with temperature gauges to monitor progress:

It took 3/4 hour for the syrup temperature to get over 110°. It was then left in the oven holding to a temperature of 113-118°C. After 65 minutes the oven was turned off and the syrup allowed to cool in the oven. The syrup never boiled, foamed up, or did anything exciting! Good! The oven light has failed, which means I can't get stressed about the "cooking" process - I can't see it!

When cooled, the result was checked:

Hum! Can't say I was impressed by the change in colour! Although this piccie is well flash illuminated against a white background. The syrup has thickened a bit as might be expected. But what has dramatically changed is the taste! It's much more strongly flavoured, but does still taste of golden syrup (concentrated golden syrup!).

I haven't any Ragus invert sugar to compare it with, but do I want it tasting like it has 20% highly refined glucose powder added? That's what is in the Ragus product! This is destined for a Victorian "mild ale" recipe, 'scuse me if I'm not concerned about whether it's the same as the Ragus product!

I'll use this in my brew on Friday - it'll get written up in my "Victorian Mild!" thread.
Click to expand...

At the time I was disappointed in my efforts not resulting in a No.3 Invert colour, even though the flavour increased. 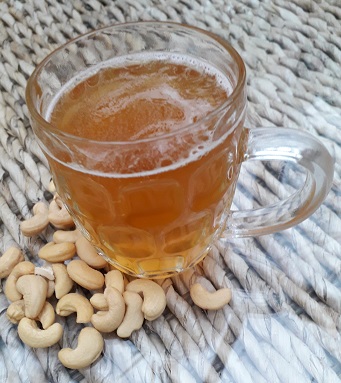 Only a week in cask (hence murky). A couple more weeks and it'll go on hand-pump.

Hanglow said:
when it went in the oven then ,1,2,3 hours after, approximately

I heated demerara sugar with some water and a few ml of lactic acid on the stove top till it got to temperature, then put it in and just checked it on occasion. It was probably closer to 115C iirc
Click to expand...

wow, what a terrific idea. im going to give this a try. perhaps it will give me the 'taste' im missing in my TTL, or British milds.

When working with sugar,(which can be as complicated as brewing,)
Search the internet for "Manyard reactions"

Delicious flavours can come out of the blue.

I've made Nos. 1, 2 & ,3 invert using a modified version of the instructions found online. My thoughts are:

1. Some on-line instructions seem to have been written by someone who has not actually made invert sugar. For instance, most of the instructions are obsessed with controlling the temperature of the syrup when boiling on the stove top. In reality, initially, the temperature stabilises at about 102°C or so and only slowly rises as the water boils off. The rate of rise does increase as the temperature approaches 115°C and care is then needed to stop it overshooting. The syrup is well behaved and doesn't boil over. To be fair maintaining the temperature once you reach your target of 115-116°C is VERY hard on a stove top because of high termal mass. See 2.

2. Using the oven for the colouring phase is the way to go. I set my oven at an indicated 120°C and this pretty much holds the temperature of the syrup stable. If the temperature starts to rise I open the oven door slightly until it falls. I may only do that once or twice in the first hour or so.

3. The colouring happens slowly and I find that the time needed is on the longer side of the guidance giving in online recipes. The flavour of the resulting syrup seems right but I am not sure that the colour is as dark as would be expected. (I wonder if commercially this stage is carried out under pressure or vacuum to increase the rate of colour change).

5. I bought 25kg blocks of Ragus 1, 2, & 3 sugars several years ago. A friend and I divided it up in 1kg packages and shared with fellow home-brewers. I consider this to be a once-only life experience of the traumatic kind. Invert sugar blocks are the spawn-of-the-devil. Making your own is the way to go.

6. If you decide to neutralise the acid at the end be careful. An erupting volcano of invert sugar is an interesting addition to the average kitchen.

johncrobinson said:
When working with sugar,(which can be as complicated as brewing,)
Search the internet for "Manyard reactions"

Delicious flavours can come out of the blue.
Click to expand...

I tried to make my own no.3, went ok, though maintaining a steady temperature on the gas stove was a pain. Definitely going in the oven next time.

One thing though, it's not exactly syrup, more like a brick. Does that matter (presumably it'll soften up when I heat it)?

I suppose it will dissolve in the hot wort like Candi crystals, but I think you are mean to end up with a syrup, aren't you?

Scrattajack said:
I tried to make my own no.3, went ok, though maintaining a steady temperature on the gas stove was a pain. Definitely going in the oven next time.

One thing though, it's not exactly syrup, more like a brick. Does that matter (presumably it'll soften up when I heat it)?
Click to expand...

Yeah, it does thicken up. I heated it up some before adding on brew day and it worked out just fine.

If its like a "brick" you have got it right.
All the water is gone.

I make mine with youngs yeast nutrient and drain cleaner.
Wonderfull flavours from "nothing".

jjsh said:
you are mean to end up with a syrup, aren't you?
Click to expand...

Also, I'm not sure how much of it to use. Presumably, it's denser than normal.

johncrobinson said:
I make mine with youngs yeast nutrient and drain cleaner.
Click to expand...

I don't feel tempted to try that method.

What i should of said is diammonium phospate and sodium hydroxide

But yup not something to do when you have had a few.

Hey! Who's hi-jacked my old thread!

Well, 'suppose I have a bad habit of doing that. Seems everyone is taking the opportunity to dismantle what I was trying to achieve? Serves me right. Here's a long essay to try and put it back on track:

What I was trying to achieve was come up with shortcuts and avoid pans of searingly hot sugar syrup cooking for hours on end. A conclusion being, let someone else do the inverting. Doing it yourself is fine (as @mentaldental says) but the risks are there for it to go wrong (sucrose solution will start to crystallise at about 66% concentration, and there are other more obvious accidents waiting to happen). For those that might have "impaired manipulative skills", or of a nervous disposition, limiting the boiling sugar step is a grand idea. There's clear "baker's invert" or I plumped for Golden Syrup.

Golden Syrup has the advantage of being partially caramelised already and is vary similar to Invert Sugar No.1. What's that? It doesn't taste or have the sugar content of the Ragus product? I would certainly hope not! I don't know how Ragus got itself established as the only "true" invert sugar, but it is many peoples idea of "true" invert; despite being 20% highly refined glucose powder, added so the syrup can be formed into blocks for easier transport. Oh, and the blocks are 25Kg (of which only 20Kgs is the actual Invert) and doesn't come in smaller quantities and is hellish to attempt dividing into smaller quantities.

As far as I've been able to deduce, the Lyle's product is still made to the original process (where it is refined from waste product of other sugar cane refining processes). Certainly the "nutritional information" lists 0.5% protein: This will be important later. It's "partially inverted", but that actually means "mostly inverted" (most "sucrose" has been split into glucose and fructose during the processing).

Why invert? Don't believe the clap-trap about it being easier for yeast to process, or it having a "different flavour profile"; you want invert sugar because one of the products (fructose) has a much lower temperature at which it caramelises (110°C rather than 160°C for sucrose and glucose) and the caramelisation creates the colour (and much of the flavours) we want.

Now, "Maillard's Reactions". Doesn't seem to be much you can do about ensuring this process happens in the way you might want, except ensure the required elements are in place: Those being the proteins (amino-acids) mentioned earlier. So using Lyle's Golden Syrup should do that, "homemade" and "supermarket" golden syrup does not. Earlier in this thread I was adding molasses to get the proteins, but molasses cloaks the actual colour of syrup you're trying to make which just makes things harder (or as I learnt, deceiving!) . Note they did not understand Maillard Reactions making Invert Syrup in the 19th Century, but made it anyway.

Hopefully that summarises where this thread had got to? I'll be using Lyle's Golden Syrup (Amazon UK link) to knock up some No.3 for a Barclay Perkins KK (1924) recipe in Ron Pattinson's "Strong Vol2" book. KK = "Burton"; Fuller's did one too ("OBE") that lasted a bit longer before morphed into today's "ESB".

peebee said:
I'll be using Lyle's Golden Syrup (Amazon UK link) to knock up some No.3
Click to expand...