Scrattajack said:
So what's the method? Put Lyle's Golden Syrup in the oven at 115°C for two or three hours?
Click to expand...

In a nutshell ... yes! Covered 'cos it should be under boiling point (just). Perhaps 3 hours minimum, I'd have to check the instructions. It takes 45 minutes getting the syrup up to temperature (115°C) too 'cos it's not coming off from "inverting" so will be cold.

Thanks for the update about the molasses. I was planning to do that experiment too. That reverts for me to try the Sui Generis way. I invert my syrup myself, I have already made an experiment with turning sodiumbicarbonate into sodiumcarbonate (won't use NaOH), and Sui Generis uses 1 tsp/kg sugar of DME.

Cor ... it's been a long time, but I get round to things eventually: 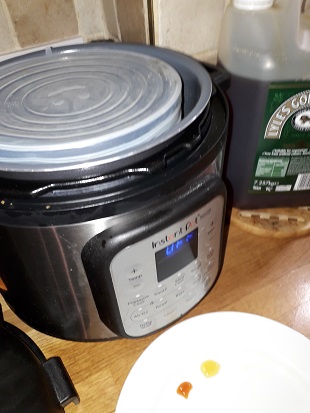 Golden Syrup (Lyle's) heated in the oven to 115°C before dropping into the "Instantpot" ("Airfryer" version 'cos it has more control over baking temperature - and makes great chips). Put on "Bake" (which uses the Airfryer lid) for 60 minutes (annoyingly the maximum time that can be selected) at 117°C.

What do you know, it flippin' works! (The plated dollops are unbaked Golden Syrup, and syrup after baking for 60 minutes). No mess, no scary hot boiling of sugar syrup ... ahh. And no flippin' enormous adulterated Ragus sticky blocks.

As I thought the colour was rather light (the instructions - ripped out of Ron Pattinson's "Vintage Beer" book - suggested 60-90 minutes for "No. 2 Invert", I'd already allowed for 30 minutes because I'm starting from close to "No. 1 Invert" by using Golden Syrup, (the book actually says 90-120 minutes) so, I restarted the Instantpot and gave it 10 more minutes. 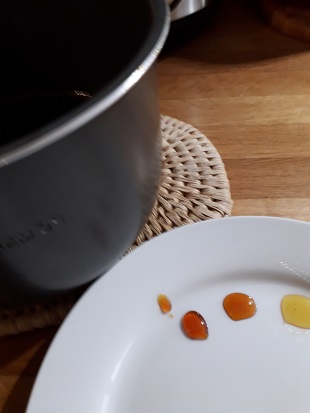 The smell making it was just great! I hadn't really appreciated how floral Tate's Golden Syrup is. The supermarket stuff (made from very refined - often beet - sugar) isn't a patch.

But moving it up to No.2 does mask those floral scents and it becomes strong caramelly. It also thickens as it cools despite attempts to prevent evaporation. Might get interesting making "No. 3 Invert", but that's a few weeks off.

I could of course just keep heating it in the oven. But I'd decided I was making it in the Instantpot because it has all the snazzy controls, lower energy usage, safety functions ... but most importantly because I'm a geek

I have just purchased RPatzs book. I may need this thread.

Cheers @St00. This thread was getting a bit unwieldy, so I restarted it >here<.

And, as I'm very good at changing my mind on subjects at about the speed that the weather changes, I'm doubting the validity of (solely) caramelising the sugar to get the colours (historically but it includes copying the "Ragus" invert sugars too, not the present-day brewing which can't really have the principle of "doing it wrong"). Just let the "Heron" articles in the thread linked above sink in. Trying to discuss this with a certain R. Pattinson (is that who you meant by "RPatzs"?) I think reduced my chances of getting on his Christmas card list to zero (quote: "they're still different f***** colours"!).

The advantage of my "new approach" is it will be a hell of a lot easier making/fabricating No.1, No.2, No.3, etc., or even trying to buy the Ragus stuff. Details not published on this forum (anywhere!) just yet.

Yes, I think I reduced my chances to getting on his Christmas card list by Tweeting him that I hoped his book was better that his attempt at Batman. . .

peebee said:
The advantage of my "new approach" is it will be a hell of a lot easier making/fabricating No.1, No.2, No.3, etc., or even trying to buy the Ragus stuff. Details not published on this forum (anywhere!) just yet.
Click to expand...