The jury is most definitely out on this one.

It might be my fault granted but this just isn't floating my boat.

I brewed it according to the instructions but for the sole use of Dark DME as the added fermentibles. Perhaps that over cooked it a bit.

It is, after 2 and a bit months in the bottle, OK. But it's not great. It just is more sharp and astringent that you would ideally want in a porter. It's got body for sure, it's got strength certainly but it's just too... raw? It has exactly no finesse whatsoever...

Given the strength of the beast and the use of dark malt and the amount of dark malt that would have been in the can maybe it just needs a very long time to condition but so far its definitely not a favourite. Which is a shame because I really like porters...

Wondered how this was after it'd been left for a little while longer? Is it any better? Or still as much of a let down? Any other way you'd say to make it any better?

Night one a couple of months back, we quite like porters, and saw this. Was gonna get it running in a couple of days. So, interested to see what you think of it now, and what you reckon could be done to make it a bit better?

..trouble is that since then I've brewed stuff that is miles better so each time I try a bottle now I end up tipping it and opening something else! There are a few left, I'll open one next year and see what like!

..trouble is that since then I've brewed stuff that is miles better so each time I try a bottle now I end up tipping it and opening something else! There are a few left, I'll open one next year and see what like!
Click to expand...

lol, not enticing me to try this kit now! lol...

Anything you'd recommend that might add some goodness to it? Steeped crystal, chocolate or biscuits malts maybe? Was gonna use 500g extra dark due and 500g brewing sugar. But wondering whether some steeped malts might help with the flavour a little?! Altho that all depends on what the local shop has to offer... If not, anything else that could help with flavour? Black treacle or something maybe?

If I was fancying a porter now I'd just brew something else! My thinking is "what's the point if there is something else to try instead?".

Are you asking because you've got one in the cupboard or because your LHBS has them in stock...?

If I was fancying a porter now I'd just brew something else! My thinking is "what's the point if there is something else to try instead?".

Are you asking because you've got one in the cupboard or because your LHBS has them in stock...?
Click to expand...

Cause I got one in the cupboard :-P (well garage to be exact)...

Going lhbs (well, chemist that has HB stuff in) on way back home from work, so well see what they have in stock. Not usually a lot, but will see... If nothing, will just brew as standard
C

Do let us know how it comes out!

You never know - it might be entirely my fault that mine tastes odd...
A

This was the first kit I tried, so I followed the instructions exactly, not wanting to experiment while I'm still a beginner.
The kit seems to be very standard, except you add 1200g not 1000g of sugar, I used a brewing sugar from wilkos. It fermented for 7 days then I bottled with 5g of brew sugar in each bottle.

I have to say that having read the reviews above I was regretting my choice of first kit. But I cracked open the first bottle yesterday (after bottling 16 days ago) and I was pleasantly surprised. I'm a big fan of porter (which is why I picked this for my first kit) and this had all the flavours you would want from an english porter. good roasted grain flavour with a touch of chocolate.

I would say that there were only a few problems, and none of them major. Firstly it was perhaps a bit sweet, secondly it was slightly too watery, so if I did this kit again I might go for 21 litre not the 23 suggested. There was also pretty much no head, but this doesn't bother me at all.

I'll let you know if these problems are resolved after it's been in the bottle a bit longer.

After having this in the bottle now for a little over 3 months, still not overly impressed by it. The taste is nice, but as stated, a little too watery. And, no head retention whatsoever. It pours out with a good head, but just disappears. The taste is ok, just not spectacular...
B

I have also found the Burton Bridge Porter to be disappointing. I currently have a batch conditioning at 6 months old, but it remains lacking flavour, body and is quite watery. I'm hoping it comes good by Xmas. A fellow brewer I know is also having a similar experience. Fingers crossed!

Having cracked open a couple more of these yesterday I am a bit less positive than I was in my first review. Maybe I was over excited as they were the first beers I had made! But the problems I listed above (too watery, too sweet, little body) are worse than I remembered when I had the first couple. I have now brewed a couple more ales (St. Peter's Ruby & Woodfordes's Admirals Reserve) and the Burton Porter is the worst of the three by quite some way. Think I'll be another hoping this gets batter when conditioned.
S

I bought a tin of this before I joined the forum, so I'm worried that I'm going to get a crap brew! However, having read what people are doing with the Coppers Stout single can kit, I've bought a tin of black treacle (450g) and a 500g bag of dark spray malt.

The kit says to add 1.2kg of sugar for a porter, so will make up the difference with 2-300g of beer kit enhancer I have.

I know that sugar only adds alcohol and it's malt and hops that add the body, but without going for a whole tin of malt extract, figured this would be the best option.

Anyway, will get this started tomorrow and will report back on my success, or lack of it!
S

I've since read that treacle isn't 100% fermentable. Is this true? If so this would explain the lower ABV.

Tastewise, well it's starting to taste like a porter, malty with a hint of coffee and chocolate. Lacks body, but maybe it will improve once I've kegged it and left it to condition for a while.

Is it worth giving it a gentle stir to see if I can wake the yeast up and get a little more work out of it, or after 11 days, is that too much to expect?
S

Well, I'm starting to regret having made this kit now! It's been in the keg for two weeks now, so I know it's still young, but I had a sample of it yesterday and was really not impressed with it at all. It certainly pours with a good head, is pitch black (can't see through it), but I did use extra dark malt extract, so that's not surprising. However, it's got absolutely no body, is watery and doesn't really taste of anything much.

When I brewed this, I didn't know that treacle was only 70% fermentable, so it had 500g Extra Dark DME, a tin of treacle and 200g of brew enhancer, so maybe 900g of fermentables in total, when the instructions call for 1kg to 1.2kg. However, I did also brew it short to 21L, which should have countered that slightly.

I hate to tip it down the sink, so will just leave it in the keg and keep sampling it in the vain hope it gets better over time :cry:

I've got a Coopers stout kit which I'm really looking forward to making after the rave reviews on here, plus my wife bought me a John Bull London Porter kit, which I've not seen any reviews off, so I hope that's better than this one!
M

This was the first brew that made mainly because I like BB Porter in the bottle.

The kit was very poor, no body and not much else really

Everything else since then has been pretty good though :)
S

Just an update on this. Initially I thought this was ok and by that, I mean drinkable, but that's about it. We drank about half of it, but each time it gave us an upset stomach :cry:

After about 2 months, it started to develop a very nasty iron-like after taste, like drinking a pint of congealed blood :sick:

In the end I chucked around 18 pints down the sink as we couldn't face drinking it any more!

I really wish that I had seen this before I bought and brewed this :C it's tasteless trash. I wanted it initially as it was free with the brewing equipment I was going to buy but passed and bought a better kit. Now I see why it was being given with the kit. My urine has more alcohol taste and body to it than this gubbins. Truly awful, so sorry I wasted my cash.

I tried the Burton Bridge Bitter kit sometime back and was disappointed in that. I suggest you move across to Coopers kits. I tried many different kits and settled on them in the end. There is a wide range, if you buy online they are usually cheap, and the stouts are for me up there with the best kits imo. Although if just done as a kit and a kilo they can be a bit uninspiring most give a good platform to boost using a minimash, grain steep, dry hop/hop tea etc. My favourite for that was the Australian Pale Ale with the Bootmaker a close second. The Porter is not too bad either.

I did this kit in 2012 and was quite happy with it, I probably pimped it up in some way but no longer have the notes for it. 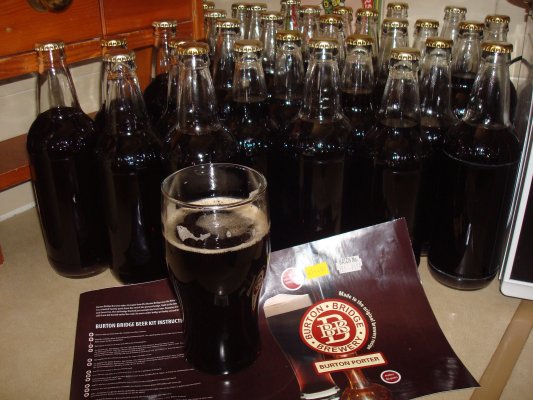 @terrym I've been brewing coopers kits for a while. So far, no other kit for porters has come anywhere close to the coopers stuff.

The surprising thing is that I went with half a kilo of extra dark DME and 750g of brewing sugar and still got poor results for this burton bridge porter. The only way to make anything of this trash is to pimp the hell out of it. But why bother when you can spend your money elsewhere with probably better results.

I for one am not going to pour the rest of my brew down the drain. I am probably going to find another piece of commercial trash beer and end up mixing it with this just so I can finish it off. I hate wasting beer!