I just put this together the idea is the brass part (supplied by Mike C thank you again) goes where a spile would normally go and CO2 leaving the cask would be captured in the bag which is from a 10L cider bag in box (I will upgrade it to a 20 if it works) the other tap can be used either to let excess gas out if the bag fills, fill the bag with CO2 if it runs out or just let air in if the cask is almost done and the CO2 has run out. In theory I hope this can stop air getting into the cask therefore extending its life far beyond what it would normally be. I will be testing over the next week-10 days and will update on how well it works. Any comments and advise welcome and it anyone knows where a new brass bit could be made that would be great as Mike had it made as a 1 off. 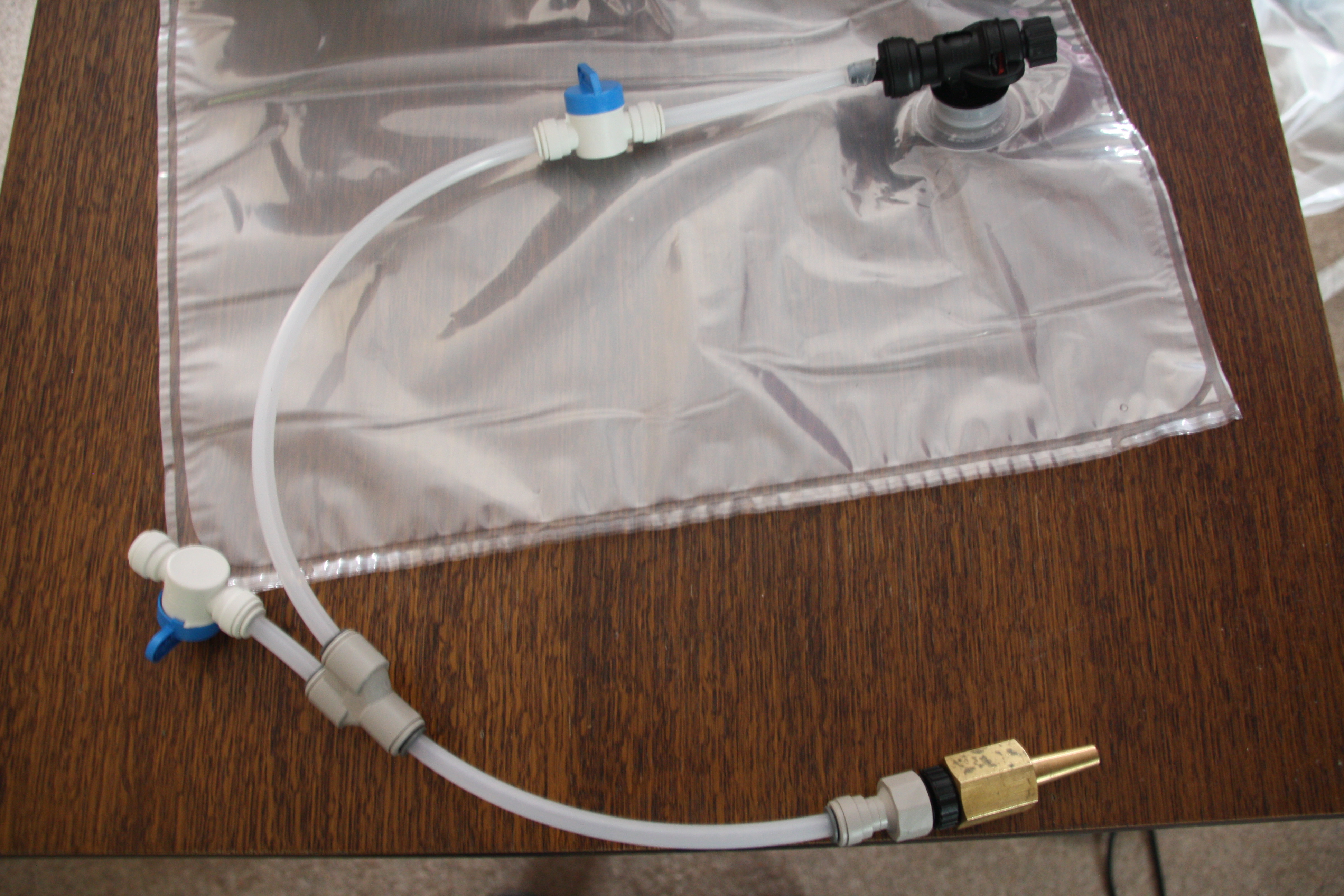 I had it connected to a pin of stout for 9 days and the beer showed no sign of going bad, carbonation level dropped for roughly 3-4 days before stabilising at about whats right for a stout. I roughly had to add about 16L of CO2 to dispense so am able to collect about half the CO2 required from the cask with this beer but would expect to collect much more from a livelier beers. So it does exactly what I want it to as I waste for to much dark beer at the moment. Its basically a cask breather alternative and I can't use a cask breather when dispensing using gravity.

Results of further experimentation so far:
On the 24th I opened a firkin of Iron Pier Wealdway IPA with 2 20l bag in box bags attached, there was something wrong with the beer as it clogged the vent plug I changed it for a clean one which clogged again so used your brass one, despite having to keep removing the fitting I still filled both bags with CO2 and about 4 pints of beer so had to vent some of it. There was something wrong with the beer as it took 4 days to clear. Today it tastes fine but the carbonation level seems a bit to low but not totally unacceptable.
On the same day I opened a firkin of Brumaison BB but let it vent for a few hours before connecting the CO2 capture as a result I captured very little CO2 but every day when I release the tap on the vent plug a little still goes into the bag. Today it tastes fine and carbonation is a little low but very acceptable.
I connected one to a cask that had been open for 3 days and it seemed to extend its life for an extra day or 2.
I used it on 3 pins and the amount of CO2 captured varied from next to none to more than would fit in a 20L bag 1 ran out well before it would deteriorate the other 2 only opened yesterday.
Other observations are you will always get some beer in the bag even if you vent for an hour, The fittings to the bag in box restrict the flow quite a bit but not enough to be an issue. If there is beer or foam in the line it restrict the flow of CO2 in and beer out of the cask so you need to give the bag a squeeze.

and using 20l bags, 2 of on a firkin. And have also found its a nightmare to get 3/8 tubing onto the bag in box connector but you can force a John guest 3/8 straight connector onto it and its air tight.
You must log in or register to reply here.
Share:
Facebook Twitter Reddit Pinterest Tumblr WhatsApp Email Link