Great play-by-play analysis. I would need it if I were to attend a match (if that's what they're called).

If you're saying a proper technique is to be bent over for leverage, I get it.
US football has taken to doing "baby scrums." After the ball carrier gets stood up/stopped/checked/halted, both the offense and defense push against each other, sometimes moving the runner forward for more yardage.
It's strange since, previously, the referee would call the play dead as soon as the offensive player, the runner, ceased forward progress, more or less.

England's Plan B measures are to end from next Thursday, with mandatory face coverings in public places and Covid passports both dropped, Boris Johnson has announced.

The prime minister also said the government would immediately drop its advice for people to work from home.
The PM said England was reverting to "Plan A" due to boosters and how people had followed Plan B measures.
He told MPs that scientists believed the Omicron wave had peaked nationally.
In a statement to MPs in the House of Commons, the prime minister confirmed mandatory Covid passports for entering nightclubs and large events would end, though organisations could choose to use the NHS Covid pass if they wished.
Mr Johnson said from now the government would no longer advise people to work from home, and that people should discuss their return to offices with employers.
And face masks will no longer be mandated, though people are still advised to wear coverings in enclosed or crowded spaces, particularly when meeting strangers.
From Thursday, secondary school pupils will no longer have to wear face masks in classrooms and the Department of Education will remove guidance on their use in communal areas "shortly", the PM added.
The prime minister also said the government intended to end the legal requirement for people to self-isolate after they tested positive for Covid.

He said while self-isolation regulations remained in place for now, as Covid becomes endemic they would need to be replaced with advice and guidance.
When the current self-isolation regulations expired on 24 March, Mr Johnson said he expected not to renew them. If the data allows, the government would "seek a vote in this House to bring that date forward", the PM added.
Restrictions on visits to care homes in England would also be eased further, with Health Secretary Sajid Javid setting out plans "in the coming days", the prime minister added.
Mr Javid will lead a Downing Street briefing at 17:00 GMT and will be joined by Dr Susan Hopkins, the UK Health Security Agency's chief medical adviser.

Does that clear us for PAAARTAE? if so nobody tell Boris

A woman who twice filmed inside a hospital during lockdown in an attempt to prove Covid-19 was a "sham" has been fined £929.
A judge told Debbie Hicks she had "no business" being in the Gloucestershire Royal Hospital.
The 47-year-old was found guilty of one charge of using threatening words or behaviour likely to cause harassment.
In one video which was shared online, she was heard asking: "Where are all the people dying from the second wave?"
In another live-streamed clip, Hicks said: "Where is the mutant virus? This is an absolute disgrace. A lot of people have been denied emergency medical treatment.
"I can't see the evidence and neither can the public watching."
The former psychologist and teacher went to the hospital on 27 and 28 December at a time when visits were not allowed.
On her second visit she encountered occupational therapist Katie Williams and senior physiotherapist Sophie Brown in a stairwell.
The staff called security and Hicks left the hospital and was arrested at her 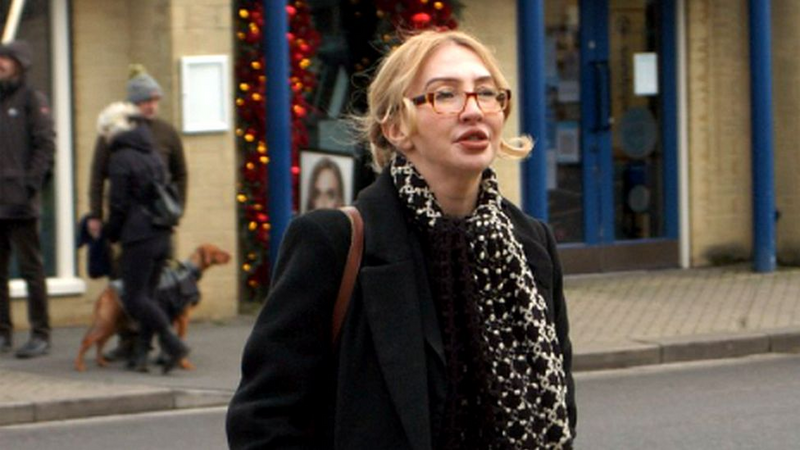 Ms Brown told the court Hicks' actions showed disrespect and violated her personal space.
"We worked so hard so to say that what we were doing was a sham put us all on edge," she said.
Hicks told a trial she was attempting to demonstrate to the public that government restrictions on movements to limit the spread of Covid-19 were disproportionate.
The hospital has since said some areas were closed for the Christmas break, and it was treating 200 patients with Covid-19 at the time of her visits.
Cheltenham Magistrates Court, sitting at Cirencester Crown Court, heard the staff she encountered had viewed footage taken by Hicks the previous day, and were aware of the comments being made by "anti-vaxxers" online.
District Judge Nicholas Wattam said Hicks "did not seek confrontation, but confrontation did develop, and they did feel threatened".

He told Hicks, who was listening via a videolink from home, "there were other ways to express your views" and that her conduct was "not reasonable and staff did not deserve to be molested by her".
The case was tried over two days earlier this month and the judge gave judgement earlier, finding her guilty of the public order offence.
Her defence argued the prosecution was not proportionate under Human Rights legislation but that was thrown out by the judge.
Hicks told Judge Wattam she was unemployed and her job prospects had been damaged by publicity about her campaign and the trial.
"I am not claiming benefits. It is just my husband's salary. We are in debt. We are struggling. My financial position is very difficult," she said.
He fined her £120 and ordered her to pay £775 prosecution costs and a £34 victim surcharge.

DavidDetroit said:
A lot of our media is shamefully manipulating innocent and basically decent folks.
Click to expand...

This is an extreme example, an unvaxxed woman who deliberately infected herself rather than isolate when her vaxxed family caught it :

Hana Horka's son tells the BBC his mother was unvaccinated but wanted to acquire immunity.
www.bbc.co.uk

What an awful story and a crying shame.

I had the booster last week, I was seriously thinking of not bothering as omecron is on the decline and it made my wife ill, I decided in the end to do it and I am now glad I did.