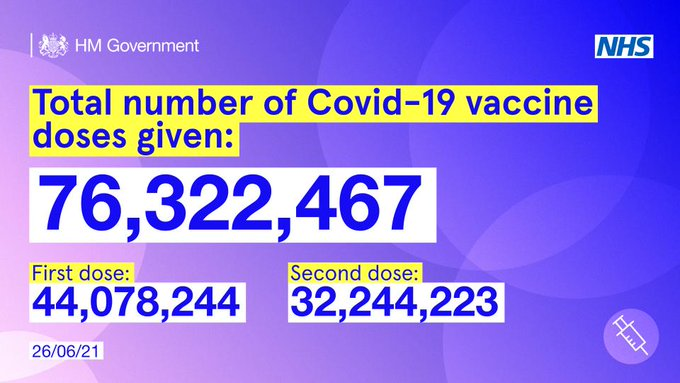 Football grounds are among hundreds of venues offering adults the chance to "grab a jab" this weekend without an appointment.
Newly-promoted sides Watford and Peterborough United opened their stadiums for walk-in inoculations.
The Pfizer vaccine is being offered to over-18s yet to receive their first jab and other age groups who can show they are awaiting their second.
Watford's mayor, Peter Taylor, described it as a "tremendous effort".
Officials at Peterborough United's Weston Homes Stadium reported a "steady flow" of people keen to access the mass vaccination offer.

According to NHS England data released on Saturday, a total of 64,089,251 vaccinations took place in England between 8 December and 25 June - including first and second doses.
More than four in five adults have now received their first jab and over 60% of people have received both doses, the NHS said.

Anyone aged 18 or over can turn up at the sites, which include football stadiums, theatres, supermarket car parks and shopping centres, and get vaccinated without needing to book in advance.
The NHS publicised the sites locally so that people can opt to get jabbed during a trip to the shops.

Sir Simon Stevens, NHS chief executive, said the national vaccination roll-out was "now in a race to the finish line".
Watford mayor, Mr Taylor, added: "The Super Sunday Clinic is the biggest pop-up clinic we have done so far, so I want to thank all the GP practices and surgeries across the town for the tremendous effort today administering the vaccine and ensuring the rollout is a success in the area.
"It is instrumental in the fight against Covid-19 and is the best way we can protect ourselves, our friends and family and, hopefully, come out of this terrible pandemic together."

Dr Gary Howsam, from the Cambridgeshire and Peterborough Clinical Commissioning Group (CCG), said the club had been "so supportive" amid the local vaccination effort.
"You don't need an appointment, or even a match day ticket, you can just turn up on the day to join the millions of others who have already had the vaccine to help to protect themselves and others," he said.

Do you think this could lead to some people trying to get a third jab? - I mean if you don't need to provide any info and turn up?

dad_of_jon said:
Do you think this could lead to some people trying to get a third jab? - I mean if you don't need to provide any info and turn up?
Click to expand...

I assume they will need ID and will check to see if you have already had the jab already. 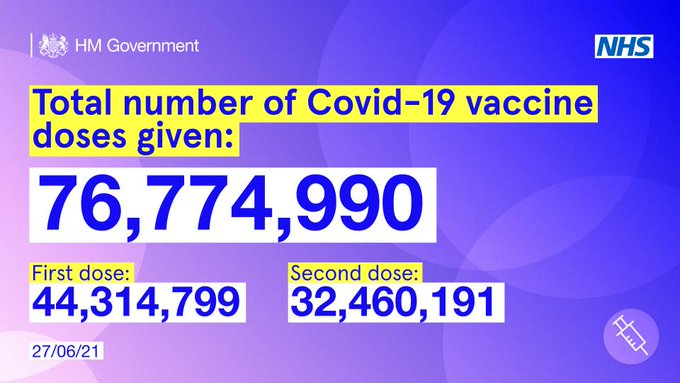 Irishwizard said:
as ever grateful for the information - as if we didn't know- now that ``````Matty has gone
Click to expand...

You have obviously got two threads mixed up as there are no posts from yesterday in this thread saying he has stepped down.


EDIT TO ADD -
Did you mean this one where members posted he had resigned just after it happened? 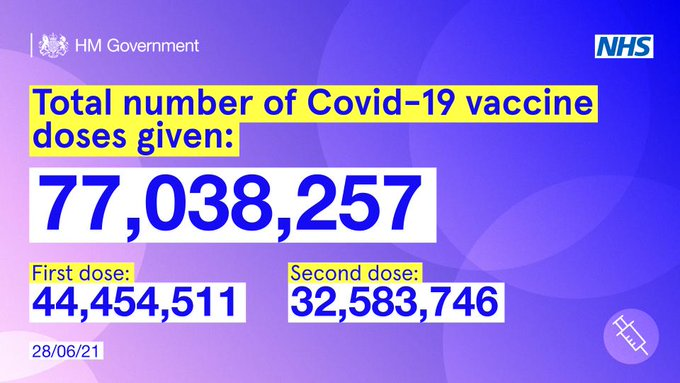 dad_of_jon said:
Do you think this could lead to some people trying to get a third jab? - I mean if you don't need to provide any info and turn up?
Click to expand...

Surely you will need your little vaccine card. 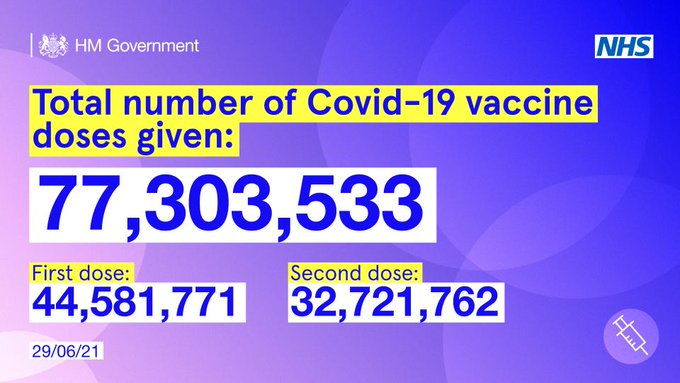 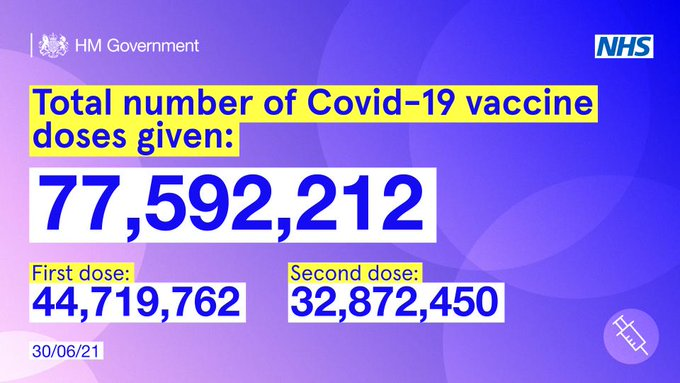 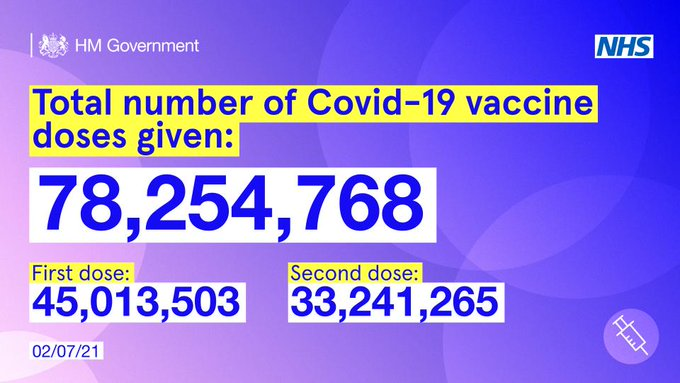 AstraZeneca drop in clinic at Morton surgery today for any over 40’s who are patients with spencer street, Warwick square, Warwick road, fusehill or Eden medical.
Whether you need your first or second jab, make the most of this stock and save yourselves a trip out of Carlisle. 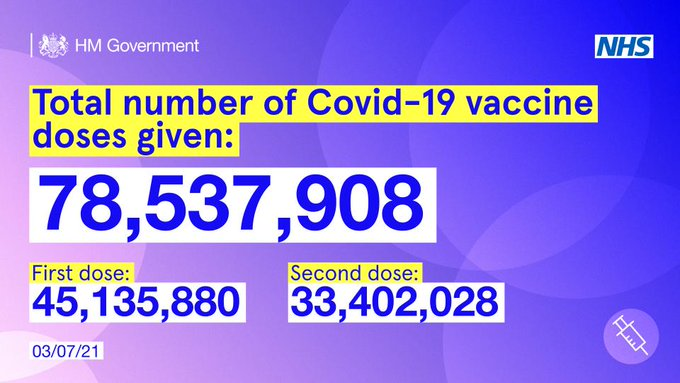 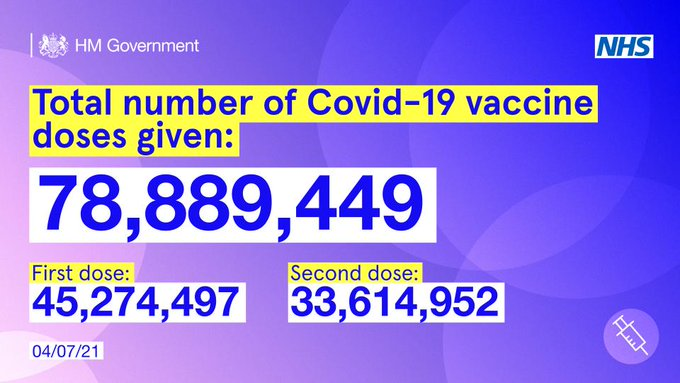 England will move into a period without legal restrictions where the public will have to exercise "personal responsibility" including on face masks, the housing secretary has said.
Robert Jenrick told the BBC's Andrew Marr people would "come to different conclusions" over masks, but he trusted people "to exercise good judgement".
All legal restrictions are expected to be lifted in England on 19 July.
The Scottish government said there would be an "ongoing need" for masks.
A spokesperson said people could still be expected to wear face coverings on public transport and in shops even after other curbs lift in Scotland on 9 August.
Scotland, Wales and Northern Ireland are in charge of their own coronavirus rules. On face masks and other measures, the Westminster government is working with counterparts in the other nations on a UK-wide approach.
In Wales, minister Mick Antoniw said it was "moving to a stage where we are having increasing normality" with the next review of curbs due on 15 July.
Mr Jenrick said on Sunday he would like the whole union to move as one.
A further 24,248 Covid cases and 15 deaths within 28 days of a positive test were recorded in the UK on Sunday.

When asked on the BBC's Andrew Marr Show whether he was confident that all restrictions would end in England on 19 July, Mr Jenrick said: "It does look as if - thanks to the success of the vaccine programme - that we now have the scope to roll back those restrictions and return to a normality as far as possible."
He said cases might continue to rise significantly as restrictions were eased.
"But we now have to move into a different period where we learn to live with the virus, we take precautions and we as individuals take personal responsibility," he said.
When asked if the requirement to wear face masks in certain settings will definitely go, Mr Jenrick said: "I can't make that commitment this morning because the prime minister will make an announcement in the coming days - it does look as if the data is in the right place."
He urged people to get fully vaccinated and, when asked about travel, said the government was "still looking at the data" in terms of allowing those who have been double-jabbed to avoid quarantine when returning from amber list countries - but it was their objective. 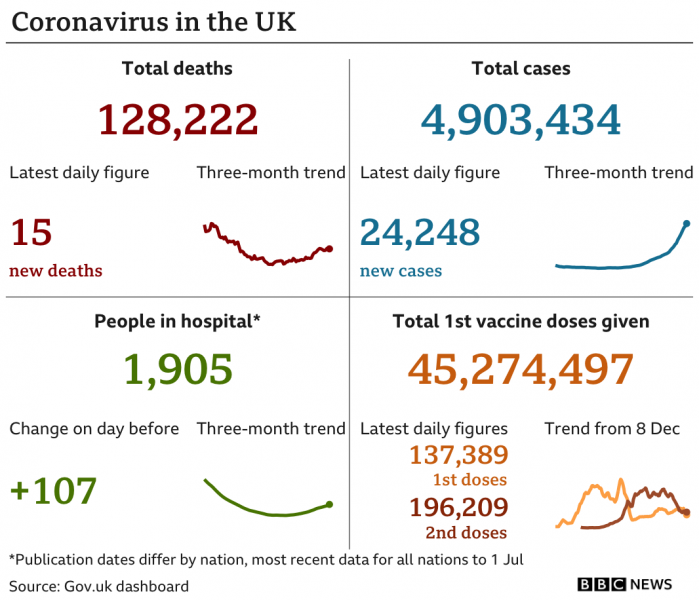 Face masks will no longer be legally required and distancing rules scrapped at the final stage of England's Covid lockdown roadmap, Boris Johnson has confirmed.

The rule of six inside private homes will be removed and work-from-home guidance abolished as 16 months of on-off restrictions on daily life end.
The PM said he expected the final step would happen as planned on 19 July.
Further updates on school bubbles, travel and self-isolation will follow.
Scotland, Wales and Northern Ireland are in charge of their own coronavirus rules.
The Scottish government has said it may continue to require masks in certain settings even after 9 August, when it is hoped the final curbs will end.
Ahead of a review on 15 July in Wales, ministers said people would need to learn to live with Covid. Rules in Northern Ireland have just eased, with another review due on 8 July.

Speaking at a Downing Street news conference, Mr Johnson said the ability to end a vast majority of legal restrictions in England was thanks to the success of the vaccine rollout.
The final stage of England's roadmap, step four, was delayed last month to no earlier than 19 July amid surging virus cases linked to the Delta variant.
Mr Johnson said step four should proceed on that date, subject to a review of the latest data on 12 July.
Announcing what the next stage of the pandemic will look like in England, he confirmed:
It means nightclubs will reopen for the first time since the pandemic began, while ordering at the bar will return in a boost to the hospitality industry.
Social distancing requirements, including the 1m-plus rule, have prevented many venues from operating at full capacity during the pandemic.
Face coverings are currently required, for those without an exemption, on public transport and in shops as part of regulations backed by law.
Mr Johnson also said the gap between first and second vaccine jabs for the under-40s will be shortened from 12 weeks to eight.
Further announcements on schools, travel and self-isolation are expected this week.
A further 27,334 cases were reported across the UK on Monday, alongside another nine deaths within 28 days of a positive test. 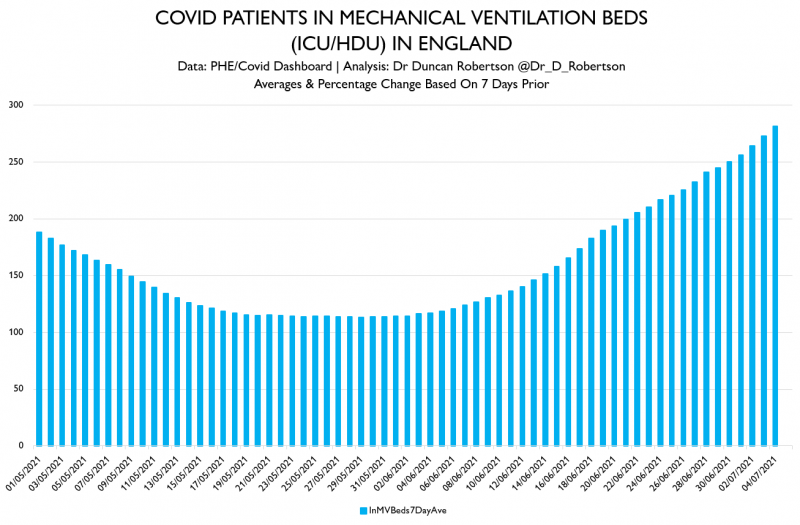 For some reason this graphic from Jens von Bergmann (@vb_jens) comes to mind.... 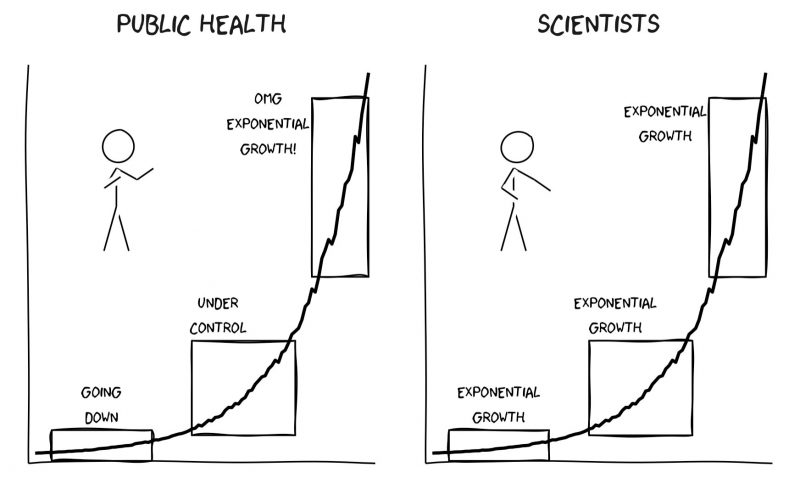 @YouGov
polling finds public very much in favour of continued use of face masks.

71% want them to continue to be mandatory on public transport, 21% don't.

PM expected to announce at 5pm that masks will no longer be a govt requirement.

It's common sense to ease restrictions but continue with masks until we reach a much higher level double vaccination. Another poor judgment call.