obscure said:
While it’s largely here say I do remember reading that about 15 years after the Spanish Flu pandemic their was a sharp increase in levels of Parkinson’s. I am aware that correlation does not mean causation but it’s not unrealistic to assume that their may be some issues years down the line.
Click to expand...

There seems to have been some progress towards figuring out how flu infection - or at least the immune response to flu - might lead to a higher risk of Parkinson's :

The Flu and You: How Viruses Influence the Risk of Parkinson's — WPC Blog 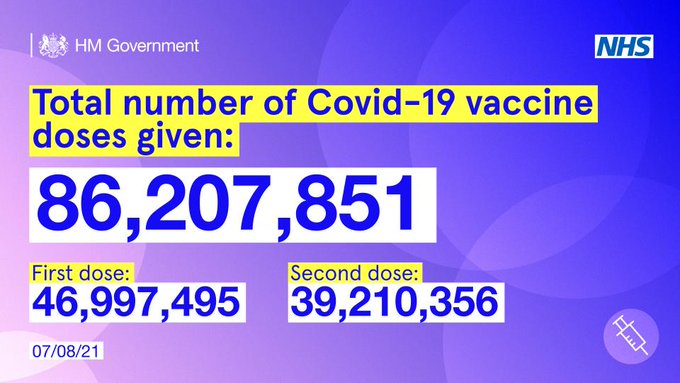 COVID deaths in the US are grossly underreported. Even so, I don't recall the last time the flu claimed 600K lives in one year.

Get those vitamin D tablets down you

jjsh said:
Being vaccinated doesn't stop you passing Covid on. So I'm always a bit unsure how those who choose not to have the vaccine are being selfish?
Click to expand...

Out on the marshes, wailing at the moon.

I don't believe that is correct with Delta, @Chippy_Tea .

I am all for vacations.

dad_of_jon said:
I'd welcome a mild interaction with c-19
Click to expand...

I officially am fully vaccinated as of 2 September. However, I'm going to skip the "I'm vaccinated so I'll go lick a few bathroom door knobs" phase.
I was never worried about getting it but I have so many older people in my orbit, I'd feel crappy if they got knocked off a few years early because of me.
I, too, stay out of night clubs for the same reason.

This is anecdotal***
I live in Detroit with a population of 600K and have avoided getting COVID or an offshoot so far.
The city where one of my relatives lives has a population of 2K and everyone in his/her familial, social circle got COVID-19.

dad_of_jon said:
They also took vit D and the only symptoms were a high temp and sweats for 48 hours.
Click to expand...

Ah vitamin D. Seems to be the in-thing right now, the latest super-supplement guaranteed to cure all ills. Well I've been taking daily megadoses for 3 years and at 56 years old with a ton of underlying 'issues' I've honestly never felt as well and alive since I was a kid. Whether the effect is genuine or attained through some arcane psychological pathways, I'm not sure. My lifestyle is cack and by any sane account I ought to be dead. I'll keep taking the vit d and carry on regardless.

I take vitamin d3 daily, have a reasonably active lifestyle and have been double jabbed since early July. I also got Covid 3 weeks ago and spent 10 days feeling nauseous, dizzy, achy and cold. No breathing difficulties or low blood oxygen levels though.

Not an experience I'd recommend, although I did at least manage to avoid passing it to anyone else.

How bad could it have been without vaccination? Who knows. But if you're going as far as taking Vitamin D/Ivermectin/something else that has no proven efficacy in stopping you being hospitalised, why wouldn't you take the vaccination that has unequivocally stopped thousands from being hospitalised or dying?

JockyBrewer said:
But if you're going as far as taking Vitamin D/Ivermectin/something else that has no proven efficacy in stopping you being hospitalised, why wouldn't you take the vaccination that has unequivocally stopped thousands from being hospitalised or dying?
Click to expand...

Dunno how it got into the vit d thing to be honest, but it was way before it became trendy to take and before covid. Whatever, I certainly feel better and without any lifestyle changes whatsoever, except for maybe drinking a bit more ale than previously. Good, eh?

I started taking vitamin D after this video was posted by a member in Covid thread in the very early days, i will carry on as i see no reason not to.

Vitamin d for men "can" help support testosterone levels and maybe even help give it a bit of a boost amongst other things so as a man it can help make you feel better.

Son of the silent age

My wife has been volunteering at the local vaccination centres right since the beginning of the crisis (just as a car park Marshall etc). In this new phase of things, the vaccination centre has moved to being a bus, that is now parked in the town centre on market days. She was standing out there all afternoon yesterday in the blazing sun - only to be constantly insulted and taunted by placard-wielding anti-vaxxers shouting (though loud hailers) that 'you are all going to die ha ha HA'.
Police attended but did nothing. Everyone is entitled to their opinion, but in my mind this is unacceptable and she found it very upsetting.

I take plenty of different vitamins and minerals and have been doing so for a long, long time. I was sold when I took a tablespoon of liquid minerals the first time and the room got brighter with no expectations on my part. I don't feel particularly better each day because of them since my body's use to it.
Some say taking supplements really just makes expensive urine and yellow if you take B-complex.
I wouldn't count on them to be a solution to our current situation but, like was said, it doesn't hurt (unless you take too high of doses).

DavidDetroit said:
I take plenty of different vitamins and minerals and have been doing so for a long, long time.
Click to expand...

I have been taking a multi vitamin for years as my diet is rubbish i really don't like fruit and veg so if SWMBO didn't put them on my plate the few nights she is here (she works shifts) i would never eat either, i don't mind peas but that's about it, 5 a day my ****

I like satsumas at Christmas but am not keen on oranges

I now also take an extra 20 mL Vitamin D i think the multi vitamin has 10 mL of D.

I hear you. It is nearly impossible for me to consume all the healthy foods necessary and even so, it would be a full-time job to do it. I gave up on that path a looong time ago. We were juicing but then you realize that you're skipping the pulp or the ruffage.
I'm pretty lacking in proper variety, especially fruits. If I do eat broccoli or green beans, then more often than not it's with hollandaise or loads of butter and salt.
I like most stuff but not enough to go out of my way to eat them. Potatoes and corn are fantastic but probably the least healthy on a regular basis.
I'm hoping the vitamins and minerals I take are the great equalizer. Some health guy once told me to try and take whatever I take in separate tablets since the ones with everything are too compacted. Who knows.

Scotland to launch vaccine passports on 1 October
People in Scotland will need proof they have been fully vaccinated before they can enter nightclubs and many large events from 1 October.
The vaccine passport plan was formally approved by Holyrood after the SNP and Greens voted in favour.
Some businesses have complained of a lack of detail about how the scheme will work in practice.
The proposals were opposed by the Conservatives, Labour and Liberal Democrats.
Deputy First Minister John Swinney said the system would reduce the risk of transmission and help prevent venues - many of which have only recently reopened - from having to close again due to Covid.
A paper published by the government on Thursday morning, just hours before the vote in the Scottish Parliament, said officials were still working to define what a nightclub actually is.
And it said evidence was still being gathered about the effectiveness of similar schemes elsewhere in the world.

People in England will need to have a "Covid pass" to access "higher risk" settings such as nightclubs from the end of this month.
There are no current plans to introduce a similar scheme in Wales or Northern Ireland.
The new rules will mean people over the age of 18 in Scotland will need to show they have had both doses of the vaccine before they are allowed entry to:
It means that many major sporting events - particularly football matches - will be affected, as will concerts and music festivals.
People who have had two vaccines in Scotland can already download or get a paper copy of a certificate with a QR code.
By the end of the month, it is expected that this code will also be available on a new NHS Scotland Status app.
These codes can be scanned at a venue to confirm the user is fully vaccinated.
Anyone who has good reasons for not getting fully vaccinated - including children and people with particular medical conditions - will be exempt.

That's ok - I don't 'do' nightclubs and I'm not bothered about Scotland either.

Need to do the same for the UK. Any forthcoming lockdown should be for non vaccine people only.