In contrast the Firkin of Jail Ale (that was surplus to requirements for a local pub at lockdown), had under 1psi in it on spiling, its PG remained at 12 for the 30 days it took me to drink it, and I had to add CO2 from an S30 cylinder all the time, which was a bit of a disappointment. It tasted fine nevertheless. My excuse for switching to commercial beer was the uncertainty of getting supplies, but I’m pleased to say that’s now sorted – apart from having to use dried yeast for the first time in 36 years.

Coffin Dodger said:
Quite a lot has happened since I last made a post on this thread. I’ve succeeded in drinking the entire contents of a firkin of my own beer, one of Princetown Brewery’s Jail Ale, and 5 of the 9 gallons (so far) of one of Summerskills Brewery’s Devon Due, all at the leisurely pace of a couple of pints a night. Oh, and Mrs CD and I celebrated our Diamond Wedding Anniversary, in a pub of course, just 9 days before they all closed!

This shows the empty Firkin borrowed from my FB (friendly brewer), with a Whale Flipper mini hand pump mounted on a bracket which clamps on the rim of either a firkin or pin, plumbed into a double exit tap which allows for either gravity or hand pump dispense. I knocked this up in the hope that I could persuade my FB to fit it to one of his casks at the SIBA Maltings Beer Festival in April, which of course never took place.

I brewed on January 24th and raked into casks a week later when the gravity was 43%ABV. This was taken after another week when I had just knocked a venting spile into the chive. There was 7½ psi of pressure inside which I slowly vented into a Noddy foil balloon via a polythene bag to hopefully catch any beer fobbing over, but there was none.

Half an hour later, with the original chive replaced by one fitted with a Hambleton Bard injector and foil balloon adapter. Time 6.30pm.

14 hours later, and balloon bulging. Removed and replaced by Noddy 2. The photo below was taken two days later, and shows the second balloon half full, and in fact this was sufficient to replace the beer as it was drawn off, so no extra carbon dioxide was required.

Photo sent to my FB to tempt him over to verify my claim that it was still in good nick 3 weeks after starting.

Norman and Chris try the beer. Firkin half full. And finally (below) a fortnight later. Norman pulls up one of the last 5 pints, and proclaims it 'Perfect'! And two Happy Brewers.

How is the little caravan pump performing?

Coffin Dodger said:
Just one then, out of how many members of this forum? Blimey, I wonder what Camra would think . . .
Click to expand...

Why would you care what those stuffy stuck in there ways people would think. Surely it's about making and serving great beer. Not about what some organisation tells you how you should do it.

Also bottle conditioned is fine to CAMRA, if you care about what they think

I was just being cynical Cyberjip, and trying to provoke some reaction – which I did!

Regarding the caravan/boat pump Foxy, it is magic. The Valterra pump was a disappointment, its valves were rubbish, and the piston to cylinder fit was, to use an engineering phrase, like a prick in a bucket. The Whale Flipper Mk IV is as different as chalk to cheese. It delivers a pint every 10 pulls (not half a pint every 15 pulls as you once said your Valterra did), and for home use it scores hands down over larger volume cylinder pumps, in that if you ditch the first two pulls every day, you waste far less beer.

I flush them through (I’ve two of them now) after each PB or cask, then pull some Antiformin in and leave overnight, and had no problems with off flavours. They are readily available from boat chandlers and caravan shops, and cost around £50.

I think Mike before that coffin comes along that you don't dodge, you should put your video if not on YouTube, then on this forum.
Show the folk on here how you have been brewing over the decades. Been appreciated by the guys over here who have been passing it around.

foxy said:
I think Mike before that coffin comes along that you don't dodge, you should put your video if not on YouTube, then on this forum.
Show the folk on here how you have been brewing over the decades. Been appreciated by the guys over here who have been passing it around.
Click to expand...

I’m glad your pals enjoyed that DVD Foxy, but I doubt my family would approve of it being in the public domain. As it happens I sent copies to a couple of other forum members, and you are the only one to say anything nice about it.

I thought you might like to see the two firkin set up resorted to during lockdown. Nearest is Jail Ale with the cask-mounted mini pump, other is Devon Dew being served by a similar pump outside the cool cabinet. 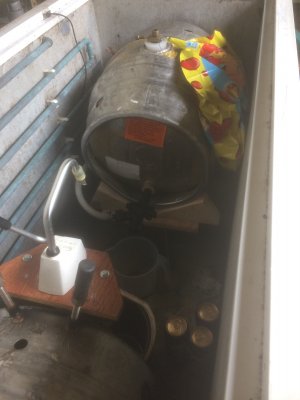 Got the Pint365 set up. May I present Arsend bitter (So called because it was the arsend of my speciality malts and some maris otter, coupled with a near date special release bitter yeast.

I've not brewed with a hand pull in mind before and "naturally" carbed up in the keg using light DME and a heat belt. I thought I'd calculated the volumes to around teh 2-2.5 Vol level, but that's obviously still too high. Next time I may just transfer to a sealed ked 1-1.5 points off of FG and leave it to finish off in the keg (using a heat belt still). It's not the best beer I've ever made, but it is a perfectly sessionable beer (despite the overshot ABV at 5%) vastly improved no doubt by the mouthfeel via the pump. Also pictured is a saison I made, just to prove I do know how to make good looking beer

Thank you to Coffin Dodger for the original post and the inspiration I gleaned from it!

If I make something that should only be served as a real ale - bitters, milds, etc, then I put it into my plastic keg and let it naturally carbonate.

I serve various beers direct from my King Kegs using their own pressure produced during secondary to dispense - stouts, saisons, and the like. Most retain 3-6psi with time between pours to restore pressure, and produce consistent results. I also use corny kegs to pressure dispense more highly carbonated beers.

Made the dubious mistake of attending an online craft brewing club 'Zoom' meeting a few weeks ago, and the harrumphing and general condescension from the assembled gathering at the mention of my using force carbonation, with several knarled members intoning "we don't allow force carbonation here", or "that ain't a real beer son" made me rapidly reconsider my choice of companionship for the evening.

Doive said:
"that ain't a real beer son" made me rapidly reconsider my choice of companionship for the evening.
Click to expand...

They sound like real a-holes. I don't like using extracts in beers, but I wouldn't dream of criticising someone that did, nor accuse it of not being "Real" beer.

Doive said:
Made the dubious mistake of attending an online craft brewing club 'Zoom' meeting a few weeks ago, and the harrumphing and general condescension from the assembled gathering at the mention of my using force carbonation, with several knarled members intoning "we don't allow force carbonation here", or "that ain't a real beer son" made me rapidly reconsider my choice of companionship for the evening.
Click to expand...

I know exactly what you mean. I'm a died in the wool real ale man (weaned on Watney's Starlight and Whitbread trophy so you can see why I'm keen), but my favourite beer of all time is pre-sellout Pilsner Urquell. Don't give a monkey's wallop how they condition and carbonate it. Used to like a pint or ten of draught Guinness, too, before they messed around with the beer. Again, couldn't give a dingo's kidney how they nitrogenate it. Both were lovely beers. What really gets on my ttis is religious bigots.

I have a Pint365 beer engine connected to my PB. I check the internal pressure with a low pressure tyre gauge (0-15psi) and add a puff of CO2 when the pressure gets to zero. The beer is fine and has been going for three weeks now between 1 and 3 psi. I have recently received a Noddy kit from Coffin Dodger and will use it on my next bitter. The Festival Russian Imperial Stout that has just gone into a PB might need a little more gas so I will prime with sugar and do as I normally do. I have CD's DVD and think it is bloody brilliant. He is a natural presenter and could show up many a celeb on the telly.

This seems like the right thread to ask perhaps a slightly naive question regarding cask or draught ale.
I was weened on Draught Bass and Marston's pedigree, which back in my yoof in the mid 70's was just about the only locally available "Real Ale" otherwise we were treated to the likes of Whitbread Trophy and other awful Keg Brews.
Anyway, in those days real ale was on it's way out, I have never been a Camra member but I have to say thank Christ for Camra or else we would all be drinking Coors light or or some similar crap.

Anyway, the very best of the best pubs, or so it was considered would not use a beer engine but would serve the beer straight from the barrel, both Bass and Pedigree were gourgeous like this, flat and wine like with a great mouthfeel, possibly due in part to some variation of a Burton Profile.

But to get to my question, whenever I see posts about making real draught or cask homebrew it is usually seems such a complicated undertaking and requiring beer engines etc etc. but why can we not just serve it straight from the barrel, no carbonation as I assume it was back then?

Galena said:
But to get to my question, whenever I see posts about making real draught or cask homebrew it is usually seems such a complicated undertaking and requiring beer engines etc etc. but why can we not just serve it straight from the barrel, no carbonation as I assume it was back then?
Click to expand...

Good cask ale, in a busy pub is probably never in contact with air. It's live and even if air enters the cask it won't affect the beer in the short term because the beer is saturated with CO2

trueblue said:
You could use a traditional cask but without a cask breather you would need to consume it within several days which why I use polypins
Click to expand...

So in a polypin there is no carbonation? What stops the oxidising?

Galena said:
So in a polypin there is no carbonation? What stops the oxidising?
Click to expand...