I noticed a new "limited edition" Founding Fathers' Pale Ale kit when placing a recent order with Hopshop. The description says "Crisp and refreshing with fruity hops flavours, orchard and tropical fruit aroma and an overlaying biscuit base" which sounds like my kind of thing. Hopshop reassured me that the fruit aroma part is poetic license, just the hopping rather than fruit extract or similar. Let's give it a go then:

Here's the box, which is the usual Festival packaging. 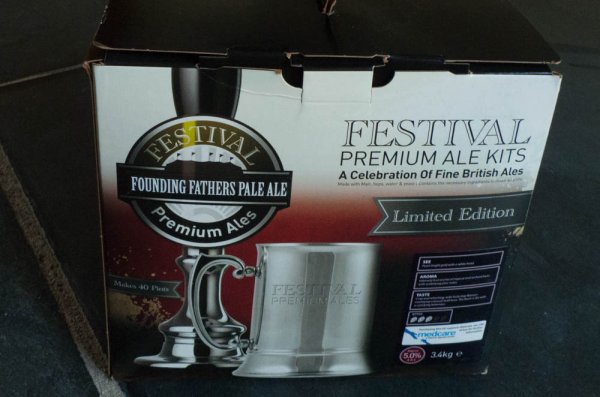 Interestingly the side of the box has the kit name blacked out, and a label stuck on with a slightly different kit name - "English Hart Pale Ale" :

Maybe Ritchies changed the kit name at the last minute or maybe it was sold under the "Hart Pale Ale" name previously, although I don't see any record of that on the Internet.

The kit contents are similar to most of the Festival kits - two malt pouches (3kg total), some dextrose/glucose (350g) to raise the gravity, 10g of yeast, a foil sachet of hop pellets (60g), a filter bag for use when siphoning, and some priming sugar (100g). 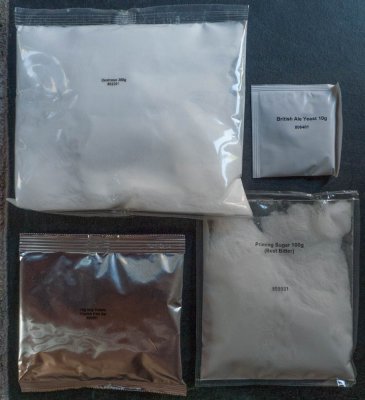 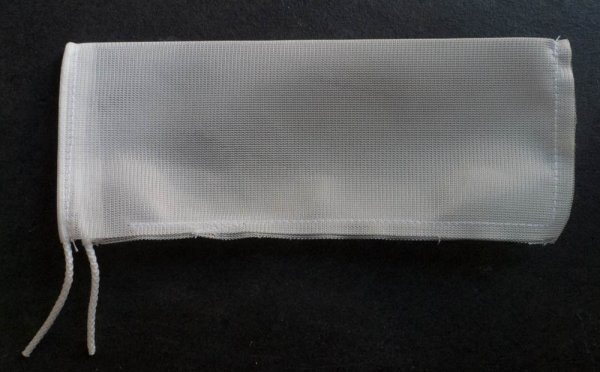 A few comments about the contents:

I started the kit today following the Festival instructions, which in brief are:
The OG measured as 1.044 - 1.045. The kit instructions estimate the final gravity to be around 1.009 which would make the ABV around 4.5% rather than the quoted 5%. Maybe down to the traces of malt remaining in the pouches, or maybe it'll end up lower than 1.009.

Pouches were labelled similar on Landlord, if I recall correctly it was labelled English Bitter rather than pale ale.
I expect the methods and quantities of all kits are similar but vary in contents of sachets.

Good luck with yours.

I've also made a few of the other Festival kits (Old Suffolk Strong Ale, Pilgrims Hope, Belgian Pale Ale, Golden Stag Summer Ale, and Razorback IPA) and as you say some have the extra dextrose and some have only the malt pouches. The Old Suffolk Strong Ale has 1kg of dextrose, and even then the OG wasn't high enough to bring the final ABV up to the quoted 6%. Richie's said that they'll up it to 1.2kg in future. My favourite Festival kit so far is the Golden Stag - lovely light floral hoppiness, around 4.5% ABV, and malt only (no dextrose).

The Founding Fathers kit is the first one where I've made a note of the labels on the pouches, so I don't know if those "English Pale Ale" malt pouches are used in many of their other kits. It would be rather disappointing if there were really only 2 or 3 different malt pouch types and maybe only a couple of yeast types and hop combinations across all the Festival kits. Unfortunately the generic labels on the pouches suggests that probably is the case.

Ag now but must say the Festival range is good. If you are careful you can still rinse the pouches out....

Day 6 today and the SG is down to 1.010 so added the hop pellets.
The instruction leaflet says to expect a final SG of 1.009 for the Founding Fathers, so it's already almost there.

4 days after adding the hops (10 days total from the start) fermentation had apparently completely stopped, and the airlock was "balanced", ie. pressure inside and outside had equalised. I left it a couple more days because there was no time to do the bottling rituals. Tonight was day 12 (hops in for 6 days), and the SG was pretty much 1.009 as per kit instructions so batch primed and bottled.

A few observations:
The beer is a fairly light amber colour, with quite a delicate hoppiness rather than a full-on American IPA style, but no point judging it at this stage really.

Will report back when it's had a chance to bottle condition and settle down.

Drank the last bottle of this last night, which had been sitting on its own for a couple of months. Quite an impressive head from this last bottle, certainly more than they were back in September.

The Ritchies description of this Founding Fathers Pale Ale is "fruity hops flavours, orchard and tropical fruit aroma and an overlaying biscuit base" and certainly there's some sort of distinct pineapple (and maybe apple) taste to it. There's no fruit extract in the kit so any fruitiness is presumably due to whatever malt extract blend and hops (unspecified) the makers have used. To my mind the acidity and fruit flavours mask the dry hop aromas too much, but that's just a matter of personal preference. I'd say it's worth a punt if you want a break from the currently ubiquitous American style IPAs or English style bitters, but it's not quite to my taste.