I've decided not to use the Duvel culture that I made. Today would have been the day that I stepped it up to 1.5 litres for the main starter and I took it out of the fridge and decanted the spent wort to test it.

It had fermented down as expected and definitely didn't taste off or sour or bad in any way. The problem was it didn't taste of anything whatsoever when last time it definitely had the distinct Belgian character. I wonder if they've started using a bland bottling yeast? Another difference this time around was the total absence of krausen on the starter. Last time it was super-agressive and tried, in fact succeeded in climbing out of the flask and making a total mess in my brew fridge. Another indication that perhaps it's not the same strain.

I didn't want to risk making 20 litres of Belgian beer with no yeast character so I've discarded it and ordered a pack of very fresh Wyeast 1388 from The Malt Miller and will be postponing my Belgian Golden Strong brew day for a week.

As stated above I'm brewing this weekend and that makes Tuesday (today) yeast starter day. My Belgian Golden strong will be largely Weyermann Bohemian Pilsner malt with about 20% dextrose and probably some wheat to give it that meringue-like head that Duvel seems to have.

This is a yeast-driven style and I'll be looking for spiciness and phenolics from the Wyeast 1388 so the hops will be restrained and all 'floral', some sort of Goldings and I'm sure I can rustle up some Tettnang. Not too much though because the yeast is the star here. 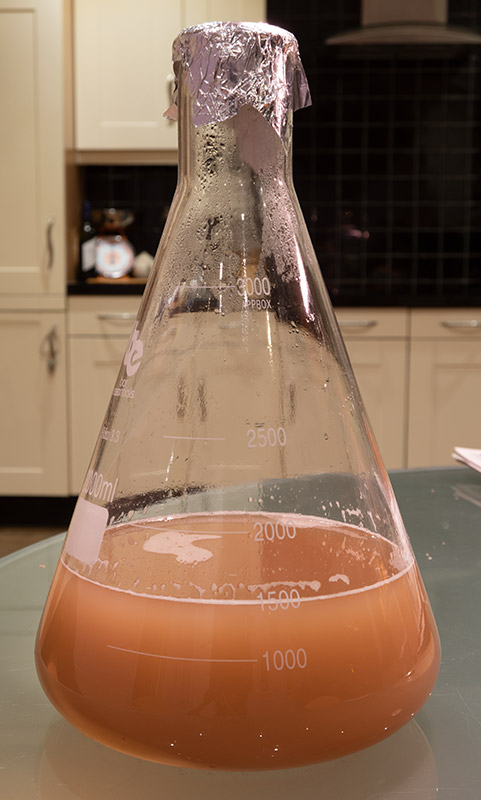 I'm not planning to do any more Belgians for a while after this so I'm not overbuilding and 1500ml will be enough. It's now on the stir-plate in the brew fridge at 20C.

Wyeast 1388 is POF+ so I must make a note to clean all kit extra-thoroughly after this one's done.

"Phenolic Off Flavour". It's got the dodgy diastaticus gene that can cause gushers, over attenuation and stuff like that.

The Wyeast 1388 starter was all done after 2 days so I took it off the stir plate and switched the fridge on to encourage it to flocculate so it can be decanted before I pitch it into the brew tomorrow night.

The recipe for my Golden Strong will be as follows:

Code:
The water profile is soft, very similar to that which I use for pilsners lagers and the hops are based on what I have in the freezer, selected for being subtle and floral which I'm hoping will complement the Belgian yeast very well.

Brewday (Nouvelle No.2 above) didn't quite go as planned. When I opened my part-used packs of Challenger (2017) and EKG (2018) hops they smelled a little "wrong" to me. Checking with the wife for a second opinion we both agreed that they were musty and so in the bin they went. With the boil approaching in just a few minutes I fired up Beersmith for an emergency recipe change. 23g of 11% Magnum replaced Challenger and 25g of 4.7% Saaz replaced EKG. Both of those smelled fine, as did the Tettnang so I was back on track.

I missed my pre-boil gravity by 2 points so resolved to add 140g extra brewing sugar to the boil, bringing the total to 1.14kg. I'll have a fiddle with Beersmith later on to see if I can work out where these missing gravity points are coming from.

Anyhow I got 24.3 litres into the fermenter at the end of the day: 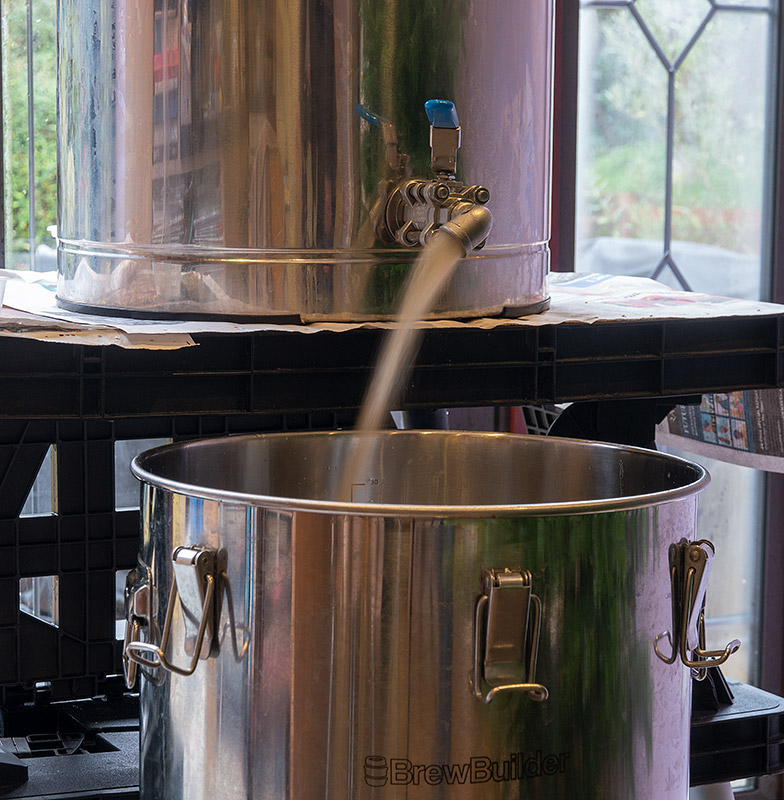 The OG is 1.063, two points off target and looks nice and pale as it should be: 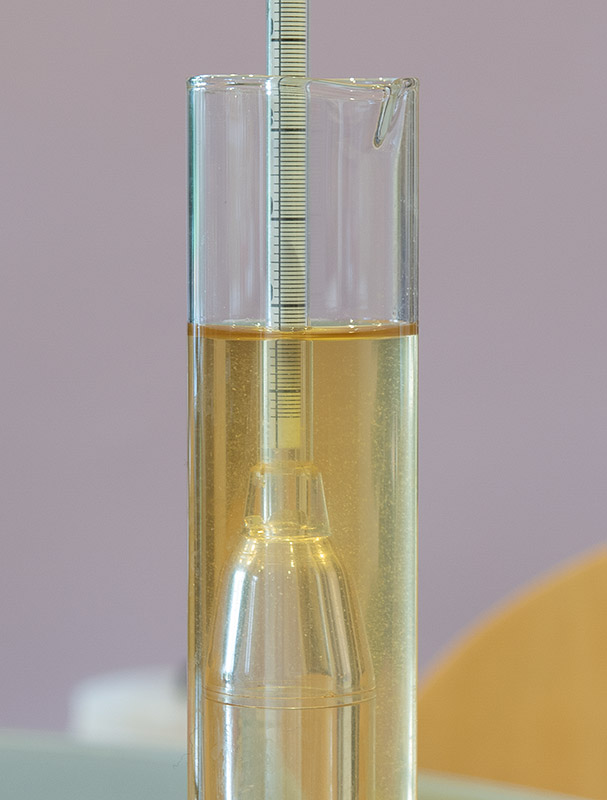 The sample tasted really nice and floral and not massively sweet either which I guess is down to the higher gravity coming from the dextrose addition rather than malt.

If the yeast attenuates very well as they usually do for me then I can expect around 7.4% from the final beer which is fine for what I'm trying to make.

Wyeast state on their website that this strain is prone to stalling at approximately 1.035 which is slightly concerning and I hope tends to apply to higher OG brews than I'm doing. I'm planning to start it at 20C and after 48 hours bring it up 1C per day to 23C for 3 weeks in the fermenter.

I think the gravity points issue is down to the PPG of the corn sugar (dextrose). If I take it out of the recipe then the numbers line up but when I add it back in the estimated OG jumps by more than actually happened. Beersmith has it down as 1.046 where as a lot of people say it should be 1.042. I'll have to adjust it downwards in future.

I pitched the yeast starter yesterday about 4pm then checked in on it this morning. No bubbling. Hmm, I'm used to a quick start when using a fresh starter. Off I go to google "Wyeast 1388 slow start". Turns out that is a thing and it can be slow so off I go to login to work feeling slightly reassured.

Lunch time and I check in again. Still nothing but the temperature appears to have crept upwards towards the upper bound of the Inkbird tolerance. Hmm, maybe there's a leak somewhere in the CO2 outlet tubing (FV -> corny-being-purged -> blowoff tube). I disconnected the keg, popped the lid and stuck my nose in to be greeted with a sinus clearing blast of CO2. OK then, it's a badly seated disconnect. I greased the o-rings and reseated them and immediately bubbles started gushing from the blowoff tube.

You don't have to look far on the interwebs to see that Wyeast 1388 is a funny one. Taking 4 weeks to ferment out, stalling at 1.0-something-high etc. so when I came down to check on it this morning and saw that bubbling had ceased completely I was worried.

. A world away from being slow this is the fastest ferment I think I've ever seen.

I pitched at 20C and set the brew-fridge to 21C for the first 24 hours then let it come up in 0.5 degree steps to 23C where it is now. Even though it must be only 1 point off FG I'll leave it in the fermenter for 14 days before kegging so the considerable amount of yeast in suspension can do their clean up job (and consume the oxygen I let in while taking a sample).
Last edited: Dec 17, 2020

I kegged my Nouvelle No.2 today. After 14 days in the fermenter it had reached an amazing 1.002 for a final ABV of 8.1%. I guess that's what having diastaticus in your genes does for you. Also fermenting at 23C will have helped. 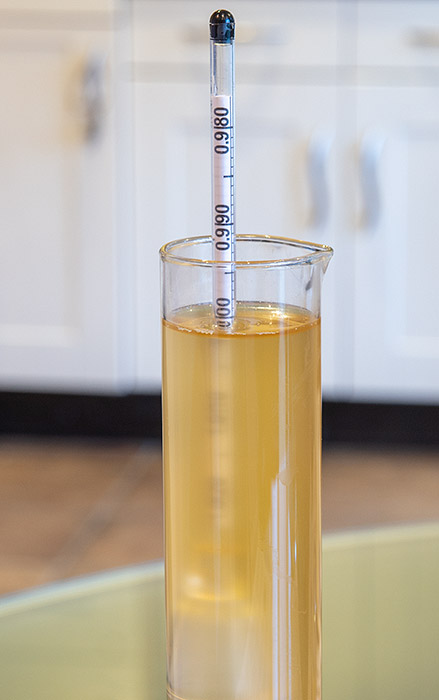 I was hoping for it to have retained some cloudiness and it has done. So much of the Belgian flavour comes from the yeast that when it drops clear it's in danger of being just another strong Saaz-y beer. I got one keg (unfined this time) and 3 bottles from the remainder. The full keg was purged 5x15psi and is now on at 20psi to carbonate.

The sample jar tasted very promising with pear and spicy notes with not much alcohol burn. I think this one will need a month before I can really start drinking it.

Really interested to read your thoughts on Wyeast 1388 and the flavour that comes from this rather than the hops. Did you cold crash before transfer or would that risk losing the cloudiness?

DocAnna said:
Really interested to read your thoughts on Wyeast 1388 and the flavour that comes from this rather than the hops. Did you cold crash before transfer or would that risk losing the cloudiness?
Click to expand...

I don't cold crash anything, even lagers, because I've found everything I do drops bright in the keg after a few weeks anyway - possibly because of the Kwik-clear finings I normally use.

I'm hoping this time that without finings then at least some of the yeast stays in suspension to keep the character that's as important to a Belgian as the yeast is to a Hefeweizen. The last time I did a Belgian Golden Strong was 2 years ago with the yeast cultured up from a bottle of Duvel. I fined it

and a few pints into the keg it had cleared and lost a lot of its unique character.

The yeast for my next brew (a bitter) arrived today: 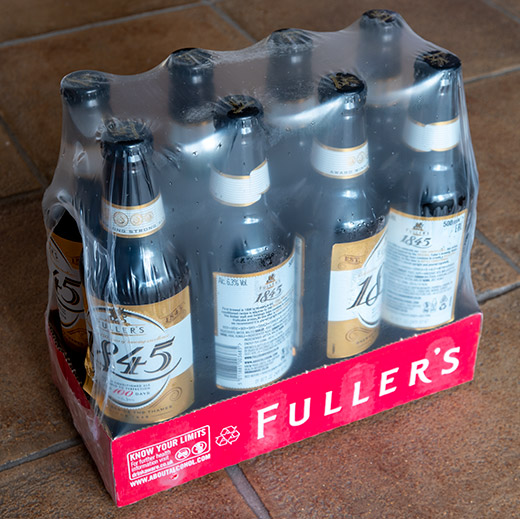 Would you believe I've never had it before? I'm looking forward to tasting it on Friday.

I used to swerve it as I lived in Chiswick and preferred to drink more exotic ales from places further away but every so often I'll have one and enjoy it.

Not sure I've ever had it either but probably ought to at some point.

I assume the bottles contain the "legendary" Fuller's strain do they? (Whatever that is!). Hope you have more luck with it than the Duvel bottling yeast!

matt76 said:
Not sure I've ever had it either but probably ought to at some point.

I assume the bottles contain the "legendary" Fuller's strain do they? (Whatever that is!). Hope you have more luck with it than the Duvel bottling yeast!

Yes it's supposed to be the real thing in the 1845 bottles. @Drunkula cultured it up a while ago and seemed to like it so I thought I'd give it a go.

Blimey where's that 1845 been all my life? What a cracking beer that is. One of the best if not the best bottled English beer I've ever had.

Anyway, remembering that I'd bought it for the yeast I collected the dregs of 2 bottles and added to 200ml of 1.020 wort to wake those yeasties up. That got 36 hours on the stir plate at 20C.

I think I'll chill it for a couple of days after that to see how much I've got and give me a chance to taste the fermented wort. Then I'll make a decision on how big the last stage needs to be. I'm guessing between 700ml and 1 litre ought to do it.

A few days ago I switched off the stir plate for the second stage starter and let it settle. Here's how it looks, you can see the nice layer of yeast below the spent wort: 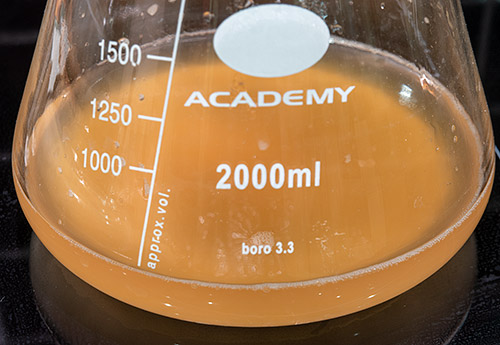 I poured a little of the spent wort to taste and it was fine, in fact it was rather fruity and enjoyable so now on to the final stage. Given that I think there's a good 2 packs in there already I've gone for a third stage of 700ml/1.040. I added that to the flask you see above: 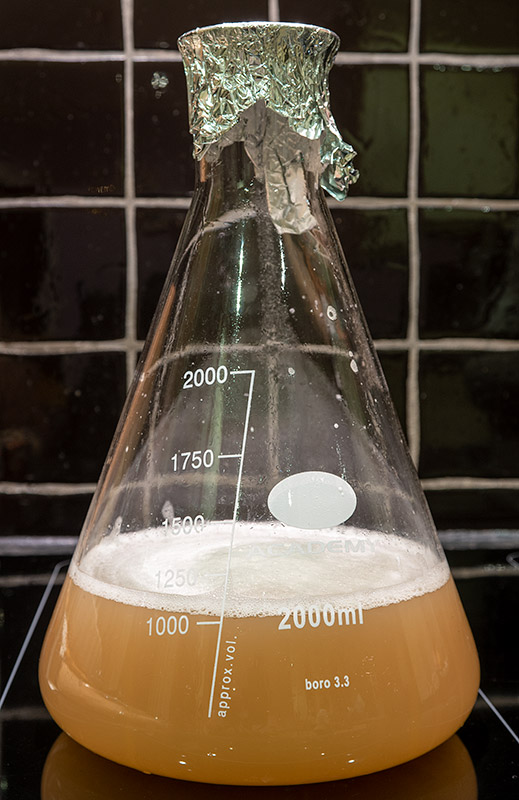