Now I'm settled in, I'll just post my brews into a single thread unless I'm doing anything odd/new!

Oatmeal Stout
Yesterday did a Jon Finch Oatmeal stout, but with the addition of 50g of Carafa Special II because I wanted it to be a bit darker. So the ingredients were:

60g East Kent Goldings at 60min
1 pack of NBS Classic English Ale Yeast, which I rehydrated for a couple of hours before pitching.

This was an odd brew because I've had these ingredients for ages - they were to let me brew with someone who wants to buy their own kit and wanted to see my AG setup, but then we've had 3 months of lockdown. So yesterday I set it all up outside and we had a socially-distanced homebrew!

In the excitement of having to occasionally grab an umbrella to protect the equipment, I forgot the water additions to change the alkalinity (though I remembered the sodium metabisulfate and CaCl). Bit annoying but it will mainly have affected the sparge, since my alk was 148ppm.

Here's a picture of the colour - it was like cola: black in bulk, but brown in thinner quantities. Will see how this pans out 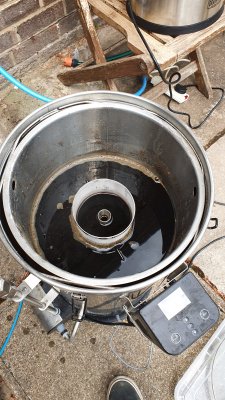 A day and a half on, and it's dropped to 1.022! Very active airlock yesterday, which has slowed down quite a bit. Rate it is going, I'll hit FG sometime this evening, but will probably let it sit for a couple of days once it's stopped fermenting

It has very slowly drifted down to 1.018 and flattened off so I think I'm done. Going to leave it in there and then crash it down to 4 (all I can manage), then I'll gelatin fine it and bottle as this is a shared batch and my Helles is still on my only keg

Right, I have all the ingredients I need for about another 5 brews, so here's the next one I will be doing

Blue Lunacy
This is based off a recipe from an original brewer of Blue Moon - I've made some changes and added some Caramunich to try and hit the colour of the current Blue Moon, and wanted to make sure I got some orange flavour in from the peels so have bulked those out a bit. I think this is one I'll have to make a few times to get the spice additions correct.