I've now got a couple of brews with the same Opshaug under my belt, each time top-cropping, saving, and growing the yeast before pitching it on brew day. It's been an interesting learning experience and actually way easier than I was anticipating - kudos to the kind folk on 'ere who answered my endless barrage of n00b questions.

Right now I'm fermenting two vessels with Opshaug and thought I'd share some observations. One is a kit beer, Bure Gold, and since my ferment fridge is tied up with the other brew I decided to use Kveik instead of the included yeast. That first brew is an all-grain pale ale effort that I clobbered together from bits of leftover inventory, again I'm using the Opshaug I stole from my Vienna Lager a few weeks back. What's interesting is that both of these share similar characteristics which may interest some folk:
Anyway, here's the two charts. The first one (from Brewfather) is the Pale Ale, whereas the other one's from Google Sheets because it's a kit beer and I'm not tracking it in Brewfather. They're slightly different timespans and resolutions, but that weird 'dip' is visible in both, with a bit of squinting. Great stuff! 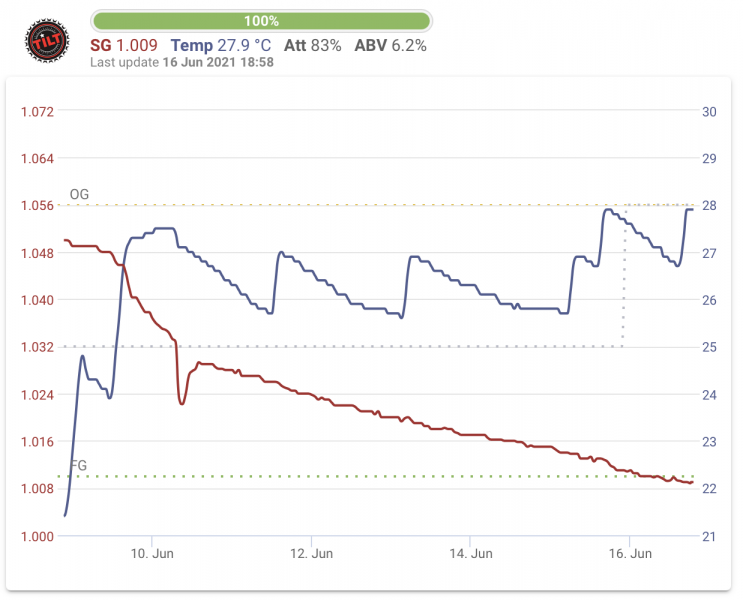 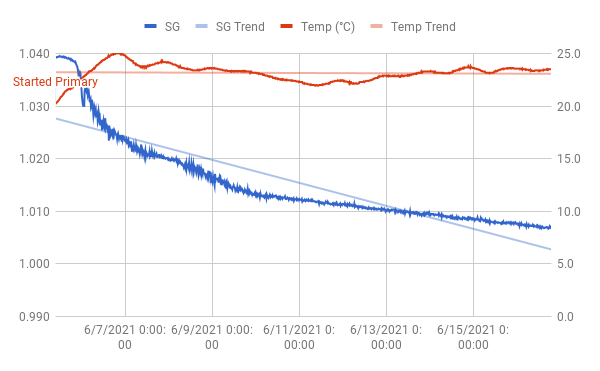 I have done a couple of brews with Voss, the first had a very fast fermentation done in 2.5 days. The second took 6 days to ferment out. What I have read and been informed of is that Kveik like higher gravity - above 1.050 and loves higher temperatures. I know there is an optimum temperature for each strain, so have you goy the right temperature? 21degC seems low to start with, 1.040 a low OG. Maybe that's why you haven't seen a really fast fermentation.

If you're repitching nutrients help a lot.

Also the attenuation being 83%, so that should take you down to 1.007 for the kit. Once they get to FG I'd expect them to just stop abruptly rather than gradually keep chugging away.

cushyno said:
I know there is an optimum temperature for each strain, so have you goy the right temperature? 21degC seems low to start with, 1.040 a low OG
Click to expand...

I'm still finding my feet with all this and try to be kind to my yeast, more out of emotional empathy than any actual scientific evidence. Part of that is not subjecting it to sudden temperature variations, so if my wort is chilled to 21℃ (force of habit) then I aim to have my starter at a similar temperature, just to give it a bit of a leg-up. Gotta add that while the Tilt's temperature sensor is pretty much spot-on, the gravity readings tend to be off by as much as 10 points, so I disregard the absolute values and only look at the curves. Couldn't agree more about nutrients.

Apologies for the delayed reply, somehow I missed this.

Hi Muppix, i have used voss in a lot of brews i always pitch 38-40c and let it free fall, i find it very neutral and have never had the orange taste some people get, i agree with cushy 21c is to low on my packs the low end is 25c optimal 35-40c

Nice one Rod, good to know. I was at a beer tasting recently (Brewer was "Queer Beer" IIRC) and one of their pale ales was very citrus-y. Since they mentioned Kveik I thought I'd be all geeky and asked which strain, to which half the room chimed "Voss, Voss" and the brewer confirmed it. I'll have to put that one on my list of things to try.

If a kit or recipe is designed with normal yeast in mind you end up with a more alcoholic and thinner tasting beer. I find that you can still brew to whatever style you want but you do need extra nutrient and calcium. You don't need anything fancy nutrient wise, I'm just using some out of date wine yeast.