Thought I'd start logging my beers on here.

Starting with yesterday's brew, had this in my mind for a while now and finally got round to brewing it. The idea is ALL British ingredients, malt, hops and yeast. I wanted to see if I could kind of approximate something like a lager but all British. Aiming for light, fresh, quaffable in the sun and around 5.5%.

For this one I decided on a 3 step mash to wring as much out of the grains as possible and hopefully leave it a little drier than if I just stuck to a single temperature.
Step 1 was 50c for 30mins (although I got side tracked and it stayed there for more like 50mins), step 2 was 63c for 40mins and step 3 was 68 for 40 mins with mash out at 75c.
I also got round to using my new Swan boiler as a sparge water tank, and before I started I changed the old leaky tap for a new ball lock. 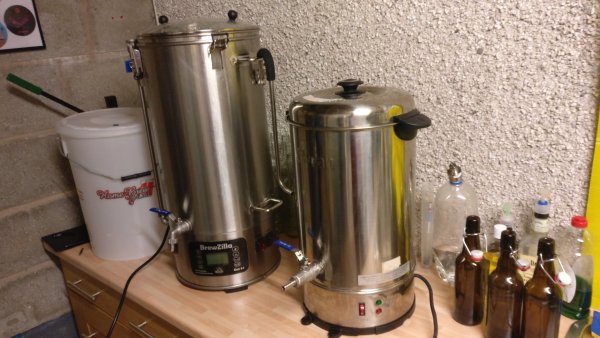 After that I boiled for 70 mins, then used the no chill Jerry can, into the fridge overnight and emptied/aerated into a clear carboy the following morning.
Fermentation temp is 15c for around 10 days (depending on how it's looking), then I'll turn it up to 20c, dry hop with a little bit more of the Opus (maybe another 20g) for 2-4 day, remove hops and cold crash/'lager' for a couple of weeks, all in primary.

Target gravity was 1.056 and the wort measured a hair above 1.060 for some reason. Could it be that it boiled for an extra 10 minutes? 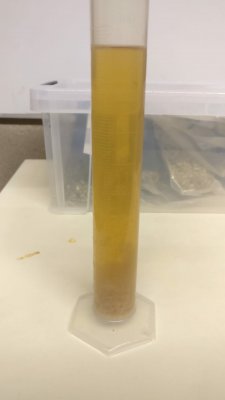 The yeast was just poured straight from the packets and shook in, and it took off within 2 hours!

Got some Wheat DME sent to me (in place of regular DME), so thought I would knock together a small partial mash wheat beer with some leftovers I had in. No wheat beer yeast in stock so I decided I'd use some Kveik Voss that I had left over.

Gonna dry hop it with 40g Hallertau Blanc once the Kveik is done.

Yeast: Kveik Voss (fermenting at 37c, with a heat belt and a greenhouse heater on)

I smashed my hydrometer so not sure exactly what the SG was but at a guess it's around 1.045 ish. I have the recipe on Beer Smith so I'll just pretend that's right. It won't be far off anyway.

12 hours later and it was going like the absolute clappers!

Update on the British Lager, kegged it a few days ago, force carbed and let it settle a bit. It's really nice. Needs another weeks or 2 but I'm well happy with it. 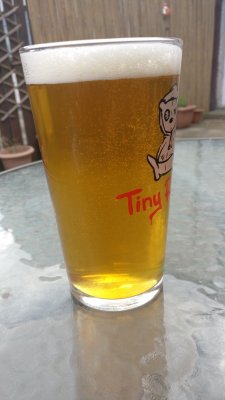 The British 'Lager' is just getting better and better by the day. Ended up 6.5% as well which is a little more than I was expecting. Absolutely drinkable now, which is under a month since I brewed it. I'm sure it will get better but it's hard to stop drinking it. Staying upright might be a challenge that I'm happy to accept.

Hydrometer arrived and I just checked he Kveik (no bubbles on the airlock any more). It's done. Went like a wizz popper for 36 hours then nothing. Tested the gravity and it's 1.008. probably low from the highly fermentable sugars. It smells amazing. I'm crashing it now. Unsure whether to dry hop, I'll decide in the next few hours. 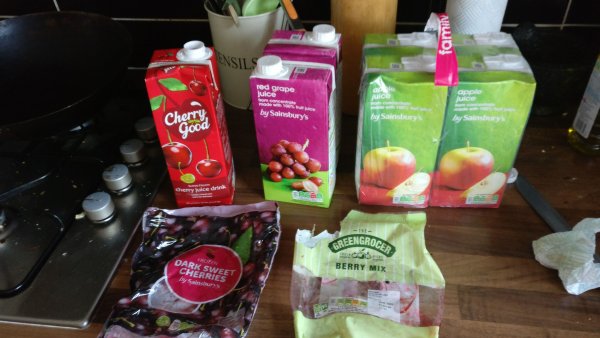 Knocked out a cherry/berry cider tonight. Wizzed the fruit up in a blender beforehand and just added everything in together.
That 'cherry good' juice has sweetener in but it's only 1/11th of the total volume so hopefully after backsweetening it won't be too noticeable.

The OG was 1.037 so reckon it'll finish around 5% so it should end up a nice drinkable summer cider.

Update on the Kveik Wheat beer: it has a really weird taste. Almost musty/mouldy on the finish, that sticks to your palete. It's basically undrinkable at the moment. I didn't do anything different than usual the only things I can put it down to is either:
1. The Kveik yeast pack was open (sealed in a baggie) in the fridge for a couple of months...
2. I took a hydrometer reading when it was completely finished then didn't keg it for a few more days - could have got oxidised or contaminated at that point or...
3. I used a different supplier for the grain than usual and it could have been contaminated.

I'll leave it in the keg to see if the taste dissipates but if it's no better by the time I need that keg I'll just dump it out. Maybe I'll bottle a few just in case it gets better with age but don't have high hopes for it at all.

NEIPA day today. I wanted to start working through some of the supplies I have so it's a bit of a mish mash, not exactly an 'NEIPA by the books' but it uses up my ingredients and hopefully should turn out ok, unless I completely eff something up (which I might've).

Treated with salt and Calcium Chloride, and corrected with lactic acid.

I messed a few things up - as per. I forgot to campden my water (that's the first time I've ever forgotten that) and ended up dropping some in after the sparge was almost done. I think that could be too late for chlorophenol production but damage limitation n all that... I also forgot the bottom filter on my robobrew but doesn't look like it made much of a difference on this one. I've had crud burn to the bottom through the filter but this was a luckily a fairly crud free brew.

Something I've learnt though... Rice hulls really are worth the money. In the past I have spent over an hour sparging. Once a sparge gets stuck it just gums up and it's hard to do anything about it but wait it out. My sparge today took 10 minutes and that's with potentially gummy wheat and oats.

Hey FT! Thanks for posting these - I’m really enjoying them! Can I ask what percentage/how much rice hulls you used in your mash?
Last edited: May 24, 2020

interesting note about the kveik, i had similar experiences with both voss and hornindal kveiks. they have a musty, mushroomy
earthiness that ruined the beer for me. i was very dissapointed with them and initally thought it was from fermenting them at ale temps, guess not. i was going to give them another shot this summer but maybe not.

Session said:
Hey FT! Thanks for posting these - In really enjoying them! Can I ask what percentage/how much rice hulls you used in your mash?
Click to expand...

Cheers Session! I just eyeballed it really, I put around 200g I think and added it in 'layers' - 50g rice hulls, 1/4 of the grist, another 50g rice hulls etc then mixed it all in. I noticed the effect almost immediately, the wort was draining through the grain bed quicker than usual meaning I had to adjust the circulation more than usual, and I had a super clear wort in around 10 mins. Definitely going to be trying bit again next time as I always had problems with slow sparges in the past.


Pennine said:
interesting note about the kveik, i had similar experiences with both voss and hornindal kveiks. they have a musty, mushroomy
earthiness that ruined the beer for me. i was very dissapointed with them and initally thought it was from fermenting them at ale temps, guess not. i was going to give them another shot this summer but maybe not.
Click to expand...

Yeah mushroomy is the flavour I'm getting. I drank a few last night and it is fading but it's definitely still there and it's not enjoyable at all. I might try a commercial one (got mine from ebay) but I would definitely try it on a small batch in future. I feel that flavour could work on a dark beer, maybe a lightly smoked porter or something. I've heard of people getting really clean ferments but that was not my experience. 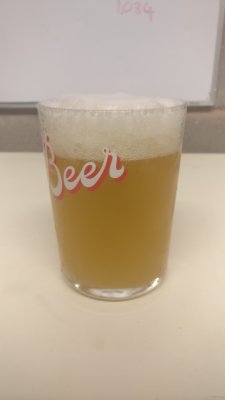 Here's a pic I took of the wheat beer by the way. It's a bit foamy because it was the first pint that day, but it looks lovely. Just a shame about the taste...