Mead is gorgeous!
There's nothing better than a good comparison brew so this time I’ve started two 1/2 gallon meads with identical recipes where the only variable is the honey itself.
*The aim is to see if the honey itself impacts on the character and flavour of the final Mead.
I chose an inexpensive runny COOP shop own brand and a local Tamar Valley premium honey.
I used 680g/1.5lb of each honey in each demijohn, added the ingredients, took an SG and pitched the D47 yeast. 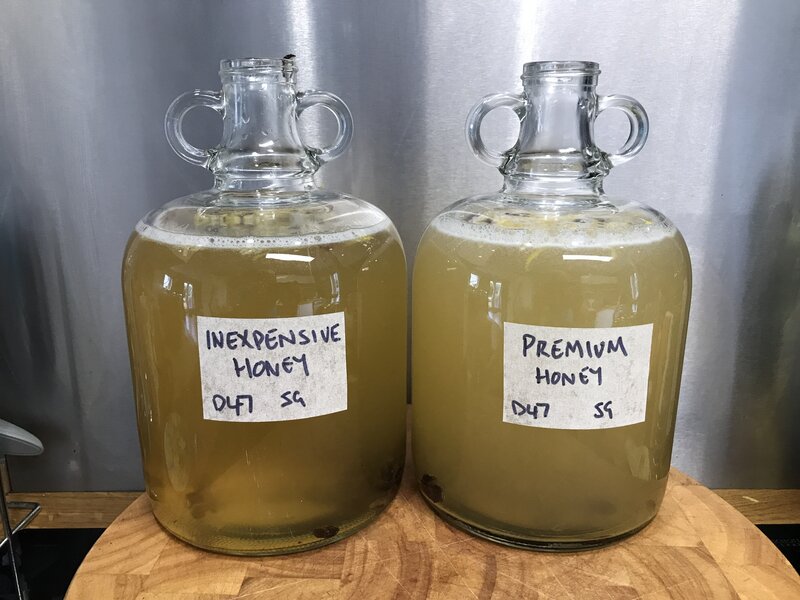 The sugar content varied with the inexpensive at 81g/100g (SG 1090) and the premium at 89g/100g (SG 1102)
The local honey had no nutritional info so the sugar content was worked out by calculating back from the SG.
The difference in starting honey was astounding spoon for spoon with the premium actually tasting like honey.
We’ll see how it goes and I’ll update as I go for those Mead lovers……

I would be curious how this comes out my mother has long kept bees and I am still surprised by how different honey can be depending on the time of year and even from year to year depending on what foliage is available, so am interested in how this will end up.

Did you add anything else or is it straight honey, water and yeast in each?

Honey is awesome! I looked at keeping bees but I lived at too high an altitude. Very jealous.
I kept the recipe simple but careful of the acid/tannin balance.
680g honey
40g chopped rinsed flame raisins
Zest and juice of one lemon
D47 yeast
Some nutrient if it starts to struggle but the lemon should help.
It's a reliable recipe so fingers crossed.

A quick update.
Primary is nearly over and the activity is settling well.
The first step was to compare the taste and sweetness of the two raw honeys before mixing. The inexpensive was overly sweet and thin with a hint of honey whereas the premium was less sweet, more viscous and wonderfully honey flavoured. Very different.
Both fermentations kicked off well with the inexpensive producing and continuing with a more foamy Krausen (top) but the activity level of the fermentations were the same.
After a few days the premium developed a slight off or egg smell which was quickly resolved with the addition of a single nutrient addition to both to be consistent. Not unexpected.
Both have an active continuing 'lava lamp' system which is always fun.
Both produced a healthy solid sediment of yeast and the premium retained a cloudier appearance throughout with the inexpensive beginning to clear and settle already.
The smell was the main difference. The premium retained its citrus/honey hint all the way through primary but the inexpensive lost it after just a week and it never returned. 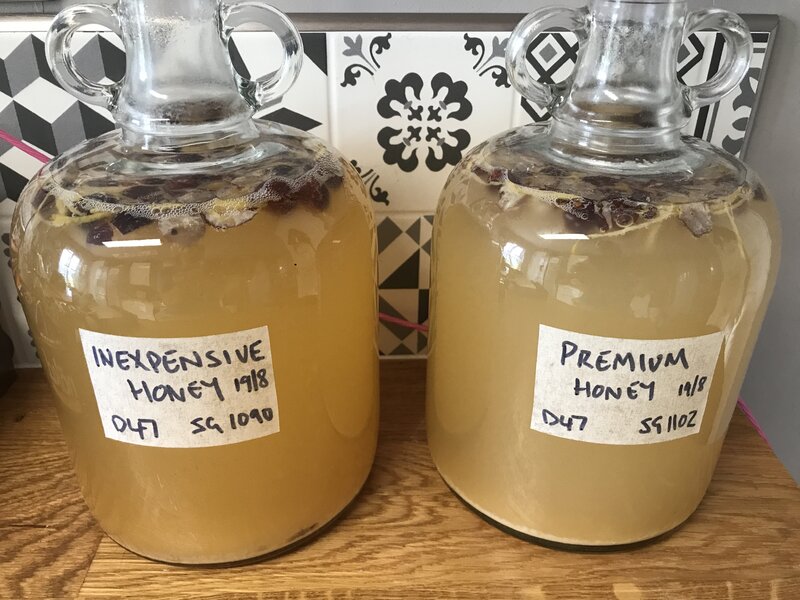 My initial thoughts are that they are developing slightly differently with the premium seeming more complex and rich but only time will tell.
The next step is a rack off for secondary. Will the differences continue or will they settle?
Check back soon!

This is very interesting Tavi-brewer I will indeed follow this.

I have only made Mead with cheap supermarket honey,Even so the results were light years ahead of bought meads that to my taste were sickly,sickly sweet.

Thought I’d throw in the price comparison as well.
Inexpensive honey was £2.94/kg
The premium honey was £22/kg
Quite a difference so the premium had better be good!!

Interesting experiment, not the same I know but I brewed two honey ales, same recipe with two different honeys, one was not the budget tesco honey but one up and the other was a friends own honey. My friends own honey was quite dainty when eaten with a hint of lavender. It took ages to condition, at first it was pretty tasteless, then a bit too lavendery, now after 8 months or so it's beautiful. The cheap honey gave quite a strong taste and was a little harsh, drinkable quite soon after conditioning 2 months or so though. Never lost its 'tang' which wasnt unpleasant but was just there.

Update time.....
So, I racked off for secondary on 10 Sept.
The premium had already starting to clear but the inexpensive has a persistent and still present haze.
Both had settled to near equivalent dry SG with inexpensive at 995 and premium at 993.
Secondary is done and I'll rack off for final clearing this week. Interestingly the premium is pretty much
done but I think the inexpensive may need a hand to clear 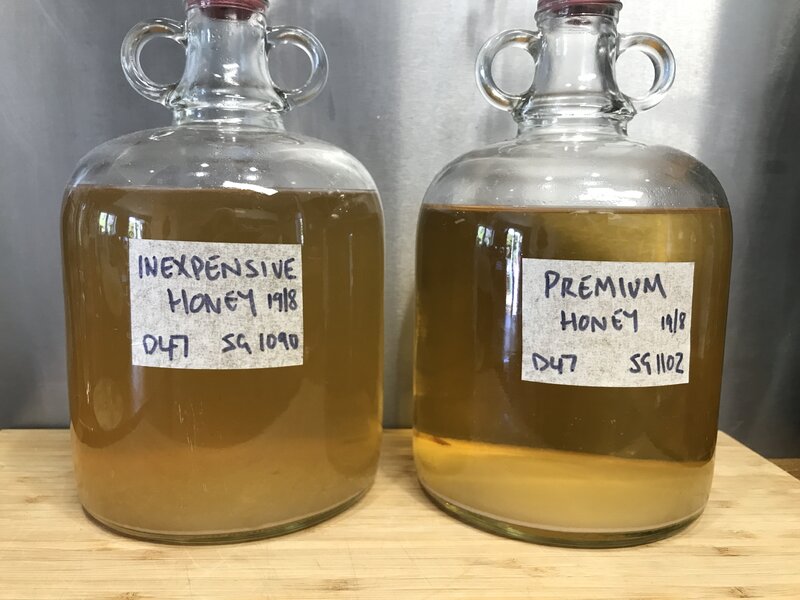 As far as taste goes there really is no competition so far. Even at this stage the premium wins hands down.
The depth and complexity of flavour are poles apart with the premium exhibiting superior honey and citrus notes. In fact I'd drink it now! Philistine.......
However, does the price point of the honey justify the added expense against the increase in flavour??
For now I need to know why the inexpensive won't clear naturally, at least in the same time period as the premium. Thoughts?
I'll check back later when it's done.

It looks like you will have at least one demijohn of really nice mead to show for it.

However the price difference is really mamoth,Kind of puts me out of that market
C

This is a great thread for me. Im a beekeeper and have just made my first batch. I followed the well trodden path of the 'Jaom' recipe? Of course ive used my own raw honey but its still not cleared or had the fruit/raisin fall to the bottom though i can see the sediment forming. I made the demi's in early september and im getting quite impatient. Do i need to put a yeast nutrient in or simply wait? Thank you.

Hi. I'm so envious that you have bees and glad you like the thread. Well done on your first experiment!
Nothing you have said would concern me any so rest assured.
Did you use bread yeast as prescribed by Jaom or a wine yeast? No biggy either way.
The fruit will likely remain atop and not necessarily sink so don't worry too much about that As long as there is a fermentation evident then it won't clear in earnest as the yeast is still active and the sediment is encouraging. Have you taken a SG?
I would wait and see what happens for a while longer or if you think its done rack off and let it sit a while.
Are you considering met/sorb or leaving it au naturel? As the guys say, mead is a waiting game.....
Good luck
T
C

Hi Tavi, i used lalvin wine yeast, the bloke in the shop advised it. There is a bubble in each demi at around 5 min intervals but i feel really sad watching it. Lol. Lockdown days. I did try to take the SG but tbh i didn't know what i was looking for. A very strange implement and not easy to read and it is what it is when all done. I will follow the instruction and wait till the fruit drops as per guide. I really dont want bombs or SWMBO would quickly and perhaps violently end my brief foray into MM. Ive read abour the sulphite thing and reckon i need the stabiliser, would that be campden tablets? Whats the dosage for a 1 gallon demi? TIA

Hi.
Lalvin D47 or EC-1118 or the like will ensure a complete fermentation if left alone long enough. Good call.
There are plenty of helpful threads on the forum to help with the taking SG and stabilisers/clearing agents.
Sorbate prevents the yeast multiplying so once the fermentable are gone you'll be fine and sulphites help to preserve the wines. No bombs Just follow the instructions as some vary.
It'll come good, we're here to help.
T
C

Tavi-brewer said:
Hi.
Lalvin D47 or EC-1118 or the like will ensure a complete fermentation if left alone long enough. Good call.
There are plenty of helpful threads on the forum to help with the taking SG and stabilisers/clearing agents.
Sorbate prevents the yeast multiplying so once the fermentable are gone you'll be fine and sulphites help to preserve the wines. No bombs Just follow the instructions as some vary.
It'll come good, we're here to help.
T
Click to expand...

Yes the forum has helped a little but i only found it after the event however going forward im sure it will a goid source of advice. If it turns out as goid as the honeybeer i made, from kit, then I'll be well pleased. Im going to have to investigate the sulphate issue. One or both oe maybe the campden tab negates thr need for anything else as i understand thry inhibit fermentation? I plan on racking it off and adding I campden tab before a little more honey to back sweeten if i feel its too dry. Then leave it for a month or so before bottling and leaving it a few months. I can then start on the next batch. Cherry flavour the mrs said but im quite into making cyser although it may have to keep. They'll be too many demis around the place to camouflage. Lol.

You will just have to waite,My latest wine has been fermenting for over 2months now,With blackberrys and chopped raisins going up and down like a 60s lava lamp.
This is in stark contrast to a WOW of about 10-12%abv that can finish fermenting in 1-2weeks.

Honey (mead) is notorious for being "slow" to ferment as there is not much nutrient in it.
Nutrient needs to be added at the START of fermentation not when its 4/5ths done,

You will need to use sorbate not campden if you want to back sweeten,Even then it can be a risky buisness.