How long to leave in primary fermentation?

My first brew (Muntons West Coast IPA) is in its primary fermentation stage. Thanks to my lack of planning (!) I have a few trips coming up around the 14 day mark (when the kit instructions says to move to secondary fermentation). I've outlined a timeline below:

I am thinking of doing a gravity reading the evening of 7/08 when I return from first trip which gives me a couple of days to do another reading on the 08/08 to check if it is a consistent reading. My question is, if the gravity reading is not stable and it needs longer should I leave in fermenting bucket until 16/08 (which would be coming to up 4 weeks just in primary fermentation which I assume is too long!) or should I just transfer to pressure barrel around 07/08-09/08 regardless?

Not done that kit, but in my experience typically fermentation of ales is mostly done in a week or less and I leave them another week to clean up then cold crash and keg, so you should be fine by the time you get back from your first trip.

Barrel it, you'll be adding sugar to carbonate anyway, and you'll be allowing it to condition in the barrel. That said, if you didn't get the chance and it was 4 weeks in the fermenter you would still be absolutely fine.

I haven't moved to a secondary fermentation vessel for ages now - straight from first bucket to bottle or keg. There is no need to move, and only adds the risk of infection.

Have done the west coast from muntons myself and life got in the way for me also , managed to bottle it after 21 days and had no issues at all mate , so wouldn’t worry yourself it will be fine,

This thread is very apt. Put 2 brews down last week and forgot I was away for business from tomorrow. Was concerned about leaving them unattended but bit happier now. One is far ahead of the other (brewed 2 days earlier and fermentation complete) so might cold crash that one so I can bottle it on my return...

I always do for 3 weeks. Never an issue and end up with mostly wonderful clear beer.
M

Thanks all for those helpful replies. Sounds like I'm overthinking a little then.


crowcrow said:
I haven't moved to a secondary fermentation vessel for ages now - straight from first bucket to bottle or keg. There is no need to move, and only adds the risk of infection.

Thanks for the clarification re terminology. The kit I was gifted came with a pressure barrel and I was under the impression that the options after the initial fermentation is to then move to bottles or pressure barrel. The more I'm, the more it looks like bottling is more reliable and is easier to distribute/refrigerate so I think next time I'll get some bottles. Thanks again for help.

Stevieboy said:
They'll be fine in your primary FV for 3 or even 4 weeks....no worries.
Click to expand...

5 days? Only under pressure (10psi) and at high temperature (20 to 25c) have I had an fermentation complete in a week.

What temps, yeast do you brew with and what sort of beers do you do?

I'd say ferment until finished ( confirmed by hydrometer stable a couple of days) then could consider bottling.
The only way I've drunk beer in a week was kveik ferment at 35 C under pressure aiming for final CO2 vols then cold crash and sample from the pressure fermenter on day 7.
But it's not necessarily the best beer you could brew with what you had!
Beer is a complex drink not a race for me or the yeast.

My thinking - what is a bottle conditioned beer - it is one where the final stages of conditioning takes place in the bottle. Never detected a difference between 330 ml bottles and 2 litre bottles.

bobukbrewer said:
My thinking - what is a bottle conditioned beer - it is one where the final stages of conditioning takes place in the bottle. Never detected a difference between 330 ml bottles and 2 litre bottles.
Click to expand...

Hopefully you drink your bottles relatively quickly and/or store them in a cool place, as fermentation can re-start in bottles and it's hard to judge just how much fermentation is left if you're trying to plan bottle conditioing. It's not such as issue in a keg as they take more pressure but glass bottles have a finite limit, after which they will go bang and glass will fly everywhere,

I bottled a batch in early June after 3 weeks in the FV and I now have gushers, not doubt the bottles will start exploding if I don't get them cooled down. Personally I'd never consider bottling before day14 of a ferment and often longer than that, exploding bottle is not nice and many of us have had them - tread with caution.

Wait until the primary fermentation is finished and the yeasty head has fallen into the beer. If you're using an airlock, the bubbling will have slowed right down or even stopped. This can take 3 or 4 day to a week, rarely longer. Rack the beer off the yeast and trub cake into a clean fermenter and leave it for another few days or until the beer begins to drop clear. Take an SG reading. Leave it for another couple of days during which you can add any dry hops you had planned. Take another reading and it the beer is clearing nicely and the reading is much the same as the previous one (dry hopping can restart fermentation and reduce the gravity a point or two) then either bottle/keg or cold crash and bottle/keg.

darrellm - At least 50% of any brew is in 1 litre and 2 litre bottles, so they act as pressure gauges. If a PET bottle goes rock hard, I open it outside to ensure marital harmony. I drink within 2 months normally as I detect no improvement beyond that.
M

Thanks all for the ongoing info & discussion.

It's day 18 so took a gravity reading. On day 1 (OG?) the reading was 1.052, today the gravity is 1.000. The kit's instructions says it should it can move on to next stage if below 1.014 so (assuming the reading is stable in 48 hours), I may be good to go to next stage (pressure barrel) but have added some photos below because to my novice eye it looks terrible! Looking at some articles with photos, I think it's in line with how it should look. May still not done though (see day 18/today below). Would be interested in what you all think?

Despite how it looks, I had a small taste of the sample after taking the reading and (perhaps thanks to low expectations) it tasted alright! I understand it's not going to taste as it should as it needs to do the next stage & have the priming sugar added - it was very strong so am assuming it will taste better after the next stage. 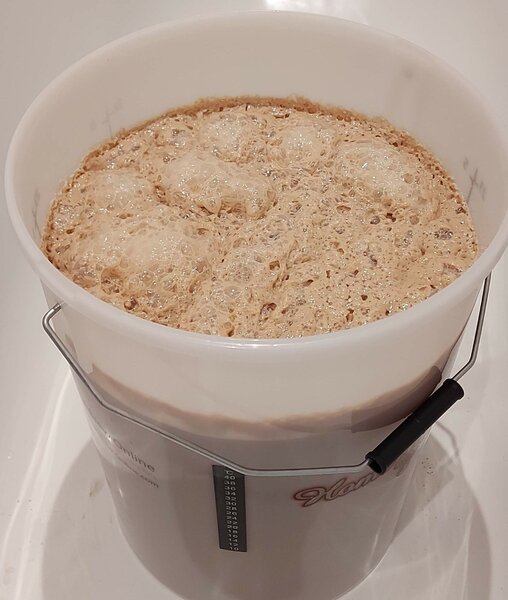 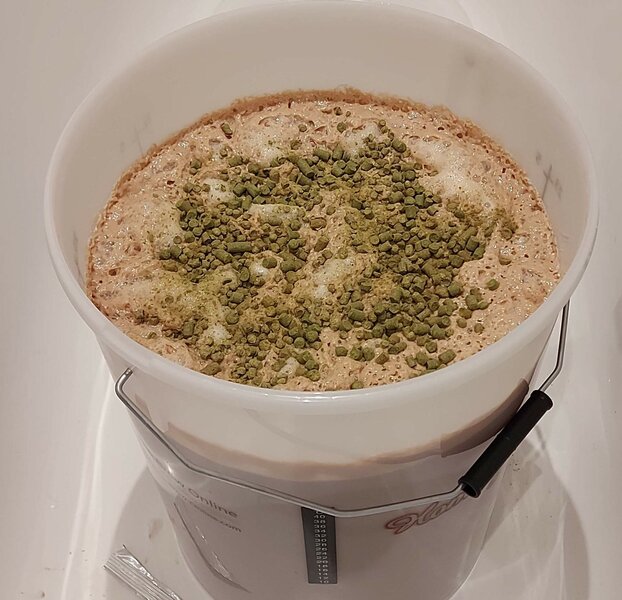 Day 18 (today) - Took a gravity reading. Still quite bubbly/foamy head in the bucket (@An Ankoù - you said the head needs to have fallen). Does this suggest it needs longer, perhaps at a warmer temp? (it's mostly been at 20-21C though in recent days more 18-19C). 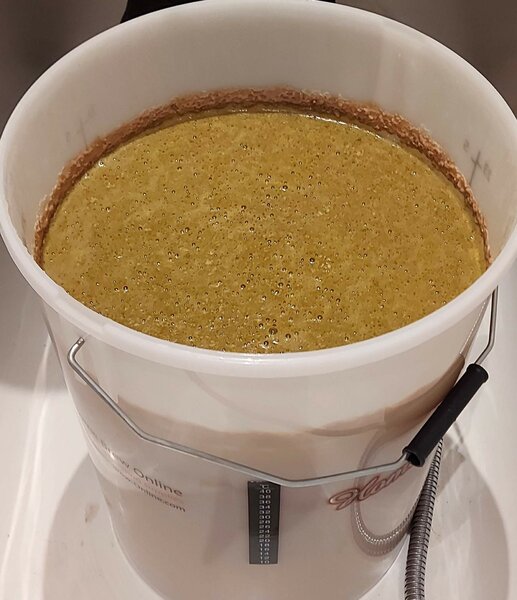 The photos look fine, that's the hop residue on top. Ideally it should drop before kegging, but generally I find the residue sticks to the side of the fermenter as the level drops.
I am surprised you are reading 1.000 on your hydrometer, although it looks like it on your photo, the brew would bottom out above 1.010 I would suggest. Not a problem you've made beer, but I don't think it's right.

As suggested earlier, you are adding priming sugar to the keg, so you will get a bit more fermentation anyway, so doesn't matter if its not 100% finished, but at 18 days I think it probably is!

Get it kegged and primed, so you can look forward to drinking it in a few weeks!

When I see that hop raft I can see the benefit of hops in a bag with a weight on. Dropped in near the end of ferment they get good exposure and the ongoing ferment mixes the hop aroma around really well.

But the appearances look normal apart from that very low reading. Have you checked the hydrometer in water to see it reads 1.000 in that?

The only other thing would be diastase enzymes in the hops acting on the unfermented sugar and more ferment then starting.

Get it bottled or kegged and see how it goes.