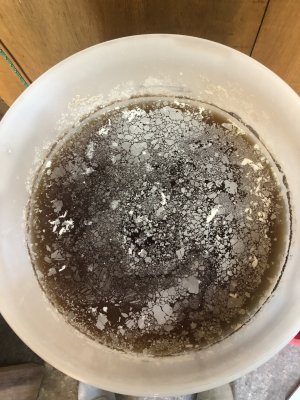 Added dry hops 5 days ago and everything appeared fine, was going to transfer to PB today and found this.
Also cleaned out dregs of PB I finished this weekend and found similar.

I guess a deep clean is required- what is the best way to go about it.

This looks very similiar to my belgian pale that I bottled the other day, what was the yeast? You sure it isn't yeast rafts?

pilgrimhudd said:
This looks very similiar to my belgian pale that I bottled the other day, what was the yeast? You sure it isn't yeast rafts?
Click to expand...

The smell was ok and the bear was clear.
I used CML 4 yeast and have used it regularly with no issues.
The recipe was a Pedigree bitter clone but added brewing sugar because the OG was low.
The residue on top was very flaky, not heard of yeast rafts but they slid across each other when agitated. 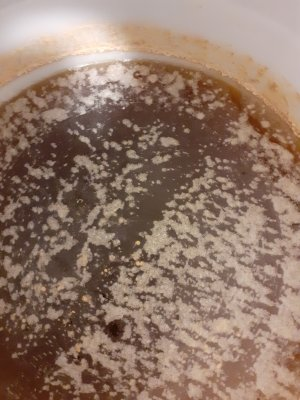 this was mine the other day, it looks similiar, i bottled anyway and it tasted fine, the white stuff which on first sight looked like mould stuck to the sides as the volume decreased.

Are you sure that's not the hop oils from the dry hops? I've had that before and it freaked me out!

This was my New England IPA on Friday. It was fine when I dry hopped with 275g of leaf hops on 8 June and added finings on 12 June.

Had a major issue with the bag of hops floating on the surface even though weighed down with a dozen or so sanitised spoons. Added two sanitised tins of baked beans but the bag still floated. Washed my hands and tried to squeeze the trapped air out but no success.

I normally bottle 3 days after adding finings but left this one a week.

No strange smell and an odd taste but not undrinkable. I’d already spent over an hour cleaning & sanitising bottles, so bottled it anyway. SO4 yeast.

Any ideas what it is? Are leaf hops OK to add for dry hopping? Could they carry an infection? (The bag didn’t seem to be very well vacuum sealed)

This was the actual size. 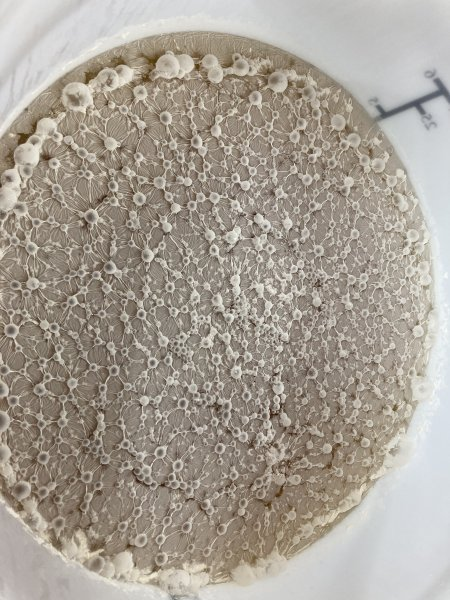 That certainly looks like a wild yeast pellicle from photos I've seen of them. You might be onto something good or it may turn sour or funky after a while. You won't know until later...

That's an impressive pellicle. They always seem to look like an alien landscape. Nuke your fermenter with bleach or chuck it and replace before using it again.

It did look pretty.

cushyno said:
Some useful info on infections and rescuing batches here How to Save a Bad Batch of Beer - Beer Syndicate
Click to expand...

Thanks @cushyno. A very interesting read and it gives me some hope that all is not lost.

Lynx Brewery said:
This was my New England IPA on Friday. It was fine when I dry hopped with 275g of leaf hops on 8 June and added finings on 12 June.
Click to expand...

When I first read this I thought "did I write this post and then forget I had done it?" as I have just had an identical situation. I boiled up a brew, then added dry hops to the fermenter, then found I had a moonscape pellicule, and initially thought "Waa, all my beer is ruined". Now I am trying the beer, and it tastes fine. Yes it has a slightly sour taste, no it is not ruined.

My prime suspect for the infection is the dry hops in the fermenter.

The difference between industrial beer and home made is that each batch of commercial beer has to be identical to the last one, often made bland enough to avoid upsetting someone, ending up satisfying no one, while home made beer is a brand new creation every time, and you can rejoice in the diversity.

I had a batch that looked very similar to that (this thread). I left it in the FV to settle, racked and bottled and it came out slightly flat, distinctly 'funky' (i.e. cidery) but drinkable in an 'interesting' way. Some of the bottles developed a bit of a pellicle themselves; I poured the beer into a jug through a metal cona coffee filter to serve. Wouldn't intentionally set out to produce it again but wouldn't chuck it if the wild things got in again.
You must log in or register to reply here.
Share:
Facebook Twitter Reddit Pinterest Tumblr WhatsApp Email Link