Judging done gents. Scores to be written up and delivered individually before results being announced.

Many thanks to all who entered, please have considerations for the time it will take to type up all scores! Hope to have it back to you all by mid week.

samale said:
I am surprised you can still write after drinking all them beer
Click to expand...

Awesome! Thanks and well done on getting through them all!

Look forward to feedback. Hope your heads aren't too heavy this morning!

All scores have been typed up. Will try my best to get them sent out to the respective entrants tonight.

Thanks again to all the entrants, so the results are as follows:

Well done to all and thanks for the entries. Some good, some not so - but the important thing was the contribution to the forum.

What I will say though was that overall hop aroma wasn't great. My only major criticism overall. Taste was there for the most part, hop aroma was elsewhere for all entires.

and congrats to @Pennine and @Markk

Interesting about the hop aroma as I'd assumed there'd be a fair few hop bombs among the entries.

Here's the recipe for my APA if anyone is interested:- 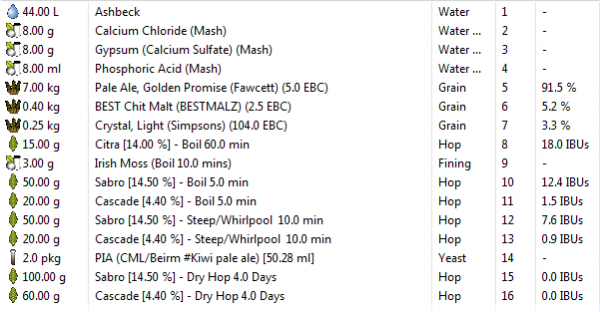 Thanks for the great feedback! And congrats to everyone.

Agreed about the aromas. Any tips on getting more of them in the beer? Bigger whirlpools and dry hops? Keg hopping? I've been a little less than happy with my hops from certain suppliers but am not positive it's a ingredient issue or process issue.

Thanks so much Ghillie and tasting team, and thanks for the amazing feedback! Appreciate all the hard work!

Thanks for the all time spent judging and writing up. The feedback is appreciated. My entry was the brew that featured in Brew day fail stories?. So I am not too surprised that it was in the not so good group.

This is disappointing. There were 30g of Citra and 100g of Mosiac for the aroma steep and then dry hopped with 50g of Amarillo

It should have been 35 IBU. One of the brew day fails, meaning it was mashed at a much higher temperature than intended possibly resulted in more residuals sugars (it didn't attenuate as much as it should have), may be these off set the bitterness.

Overall Impression 4/10 Good effort but the lacking bitterness and poor aroma was the downfall.

Although that is the lowest score I have ever add I am not too disappointed because it was half expected and I can learn from it.

and congrats to @Pennine and @Markk

Interesting about the hop aroma as I'd assumed there'd be a fair few hop bombs among the entries.

Here's the recipe for my APA if anyone is interested:-

Most likely as the beers have been sat around for a month waiting to be opened.

I don't think it was a very high scoring month by the looks of it. Out of interest what was the score of the beers placed.

Here's my feedback, and what I learned/knew already.

Aroma 4/12 Crystally sweet malt aroma. Lacking in hop forward notes. Caramel rich malt on the nose, earthy hops. - I'm still experimenting with how many dry hops to add, and what ratios when mixing hops. So definitely need to up the hops in this recipe with more Chinook in the ratio. This brew had 1/1/1 Chinook/Amarillo/Mosiac

Appearance 3/3 Best appearance beer for the competition. Crystal clear with nice lasting ivory head. Made from a kit? - Not from a kit so I'm very happy with this, I don't use any fining agents in my brews and it's exactly the colour I was going for.

Flavour 8/20 Rich, caramel and roasty. Spicy hop flavour, not particularly mirroring the aroma hops. Boozy in flavour which is ideal for a DIPA but a lot sweeter than ideal, lower than liked IBU/too much caramalt/crystal? Lacking in bitterness. - I ended up with 600ml more than intended in this brew (5l batch) which lowered the IBUs from the 60 I wanted to 50. I've sorted my liquor problem out in recent brews so this should improve on a rebrew and I'll up the IBUs to 70 with a mid hop addition. I also bulk aged in SV for two months to round out any harsh alcohol before dry hopping for a week.

Overall Impression 4/10 Lacking in hop aroma, lacking in bitterness, a little sweet as a result. - Final note, in regards to the hop aroma. Add more hops and drink fresher! It's been in the bottle since early December so the initial hop aroma has definitely faded now.

Great feedback, I've learned a lot from it. I'll be rebrewing with these notes in mind and hopefully I can enter into the next competition for more feedback and hopefully a better score.

RyePA
Aroma 4/12 No hop aroma at all. Malty notes coming through though.
Appearance 2/3 Good clarity, decent lasting head – off white.
Flavour 8/20 Malt heavy, overpowering caramel however.
Mouthfeel 3/5 Heavy mouthfeel, good bitterness to the beer.
Overall 5/10 Good effort, lack of hops though – pity. Slightly too much caramel flavour for us too.
Total 22/50

Here was the feedback of one I sent in. Spot on criticism and matched my own.
I modeled this one of of denny conn's rye IPA and also thought there was way too much caramel, crystal malts were 13%
It was over 3 months old too and the hops faded fast and were very faint by two months.
Total hops in the boil were 100g for 10l, and then 30g dry hop. Columbus and Willamette.

Next time I'd definitely reduce the crystal to closer to 7-8%. I would use Columbus again but also use Chinook in place of Willamette.
And apparently I need to dry hop with 50-100g per 10l. I could also do with a little less bitterness.

Many thanks for the feedback as it's really appreciated and not unexpected for this IPA. It's was a very pale and simple grist, with the aim to let the hops shine through and not be confused by powerful biscuit or malty notes.
So I was a little surprised with:
Overall Impression 4/10 Not a bad beer, lacking on the aroma front and rather missing in the flavour department on the hop front too
As it had 100g Amarillo and 100g cascade added evenly at flameout and dry hop in a 15l batch.

As this aroma comment was made across the board, sure you ain't coming down with a cold? :-) to my nose it has a similar punch to a brewdog punk ipa

Well, I can only say I’m over the moon. I started brewing with kits in January 2019 then moved on to AG BIAB in July 2019. This was the first time I’d entered a beer in a competition so was well pleased when I saw my Hazy IPA came joint first.

I gave this one a go having tasted and loved Adnams New England IPA. I loosely followed the John Finch NEIPA recipe on maltmiller website https://www.themaltmiller.co.uk/product/ne-ipa-jon-finch-recipe/adjusting the grain bill down to produce something a bit more session-able (4.5ish% instead of the original 7.4%) and closer to the Adnams beer I loved. In addition, I replaced the hops with the ones Adnams use in theirs, Chinook, Manderina Bavaria and Citra. I was really pleased with my finished beer. So glad the judges appear to have been too. In case of interest, the recipe is here: https://www.brewersfriend.com/homebrew/recipe/edit/886660

Well done to everyone who took part and thanks @Ghillie for organising, and the tasting team for making my weekend.

Thanks for the feedback. I knew that there were faults with the beer, and it was useful to get another perspective.

For the club's January 2020 Beer of the Quarter (BOTQ), the assorted fools of Norwich Amateur Brewers chose to do a Kveik Off!

There were around 10 beers in the Kveik Off! and it is fair to say that results were very mixed.

I brewed an West Coast IPA with SImcoe and Columbus, fermented with Simonaitis from a popular ebay yeast seller. The brewday (28/12/19) went fine and I hit all my numbers. Pitched the yeast at 32C. In short, it took 2 weeks to finish. Crashed, kegged, carbed.

So, my beer looked like orange soup. To say 'lacks clarity' would not do justice to the almost total opacity of this beer. Lots of orange on the nose, but combined with phenolic off flavours.

I have previously brewed with the Voss Omega isolate, and had much better results.

In our brew club, we know how to brew, and yet over half of the beers that we made had significant faults. Of the beers with faults, all of us had purchased our yeast from a popular ebay yeast rabbit.

We wonder whether the strains we were sold were infected. As a club, we have been put off Kveik by this experience.

Nicks90 said:
Many thanks for the feedback as it's really appreciated and not unexpected for this IPA. It's was a very pale and simple grist, with the aim to let the hops shine through and not be confused by powerful biscuit or malty notes.
So I was a little surprised with:
Overall Impression 4/10 Not a bad beer, lacking on the aroma front and rather missing in the flavour department on the hop front too
As it had 100g Amarillo and 100g cascade added evenly at flameout and dry hop in a 15l batch.

As this aroma comment was made across the board, sure you ain't coming down with a cold? :-) to my nose it has a similar punch to a brewdog punk ipa
Click to expand...

Haha, it might seem that the judges well all full of the cold but wasn't the case.

When was the beer bottled? If you're additions were solely flameout and DH. It's possible they've diminished drastically. Flameout hop additions, going from personal experience, often tend to be bold and at the front initially, but fade quick on the flavour front like a DH aroma would with time. Because of this, I always tend to do back end flavour additions during the boil to lock in that flavour. 15, 10, 5 - timings like that. Then flameouts and steeps of course, but I found that the steep wasn't enough just by itself unless you're drinking the batch within a couple of weeks!