I hope he enjoys the doughnuts 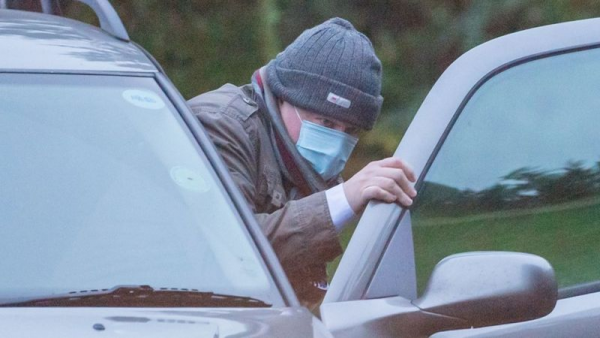 A police officer accused of trying to buy a £9.95 box of doughnuts for seven pence by sticking on a cheaper barcode has been sacked for gross misconduct.

PC Simon Read, from Cambridgeshire Police, was found to have switched the price for the cakes at a Wisbech supermarket on 10 February.

A misconduct hearing found he had breached professional standards of honesty and integrity.

PC Read, who had denied the charges, was dismissed without notice.

At the two-day hearing in Peterborough PC Read said he had made an honest mistake at a Tesco Extra self-service till.

While in uniform, he said he purchased four items from the store - the tray of 12 doughnuts, the carrots, a sandwich and a drink.

The hearing was told he scanned the carrots barcode twice and failed to scan the doughnuts barcode, paying around £4 for the items instead of about £14.

He said: "I simply scanned where I believed the barcodes were and placed them down (in the bagging area)."

The panel ruled his explanation was "lacking in credibility".

Sharmistha Michaels, chairwoman of the disciplinary panel, said: "On the balance of probabilities we are satisfied that PC Read did intentionally scan the wrong barcode."

PC Read had previously said: "I didn't check the screen. I wish I had have done."

Ms Michaels said CCTV footage showed him looking at it at the time as he selected his method of payment.

She added that if he intended to pay the correct price he could have checked that he scanned the right barcode and it if was a "genuine mistake" he had opportunities to put it right.

His actions were "incompatible with his role as a police officer".

Mark Ley-Morgan, a lawyer who set out the misconduct case, said it was "an officer effectively stealing while in uniform".

Carolina Bracken, PC Read's lawyer, said he had an "unblemished career", had served in the armed forces, before he joined Cambridgeshire police in January and had served with Thames Valley Police from 2008.

Ms Bracken said the case weighed heavily on him and he had received prank calls in the night from people offering him doughnuts.

PC Read has the right to appeal the decision.

After the ruling the Jane Gyford, deputy Chief Constable of Cambridgeshire Police, said: "The public should be able to trust that police officers in their duty will act with honesty and integrity at all times.

"I hope this outcome offers reassurance to our communities that our officers and staff will be held to account for their actions."

Interestingly he hasn't been prosecuted for theft...as you can't be as to be prosecuted you have to have been trained on the apparatus to ensure you understand how they work.
They've made an example of him...there's 1000's scamming those tills every day...

A corrupt cop who was involved in the wholesale movement of drugs and laundering hundreds of thousands of pounds has been dismissed without notice following his criminal conviction.

Little worse than a few donuts

Clint said:
Interestingly he hasn't been prosecuted for theft...as you can't be as to be prosecuted you have to have been trained on the apparatus to ensure you understand how they work.
Click to expand...

I thought he couldn't be done for theft because the value of the item has to be over a certain value, and, because of the coupon he was just under it?

Those tills are run on a certain loss factor that outweighs the cost of manning a till...persons cannot be held responsible on the basis they haven't had training...if you don't understand it you could make mistakes.

Be interesting to see how a normal punter would be treated

You play thick and they send you on your way...

Clint said:
You play thick and they send you on your way..
Click to expand...

Well, he was a plod, can't have been too difficult.

It would be interesting to see how far the concept of playing dumb would work with regards to a self service checkout, I'm doing some shopping at Morrisons tomorrow, I might try scanning a widescreen tv through as a small onion...

Funniest thing I have seen was on a British documentary a police woman was relating a story of a young shoplifter who had lifted 2 bottles of washing up liquid. The perpetrator told the police woman he could only be charged for stealing one bottle because it was on special, buy one and get one free!

As for those self checkouts, I would say the super markets know that the majority of shoppers are honest. The biggest problem for us is they are insured against theft, so we are all paying more for groceries to pay the insurance premiums.

Clint said:
Those tills are run on a certain loss factor that outweighs the cost of manning a till...persons cannot be held responsible on the basis they haven't had training...if you don't understand it you could make mistakes.
Click to expand...

That's interesting, I wonder where the line is? I mean, I can't imagine you'd get away with running someone over by saying you'd never had a driving lesson.

Youngest daughter got cashback on a self service till and left forgetting the cash.
She realised moments later and returned to collect it.
The cash was still there but another person was using the till.
Daughter asked them politely if she could take her money.

The daughter pointed out that they hadn't finished using the checkout so how could it be.
She was met with abuse and the shop assistant asked what was going on.
After hearing both sides she said "fine, we'll ask the police".
The other person left still mouthing off.

The world has it's fair share of thieving lying scum.

jjsh said:
I thought he couldn't be done for theft because the value of the item has to be over a certain value, and, because of the coupon he was just under it?
Click to expand...

When we watched a recent documentary about the life of store security it was £200 they take the goods off the thief and they are banned from the store for 12 months, if its over £200 they get the police in, why they showed that is beyond me it gives thieves a cut off point they may not have known before.

I never been trained to use a supermarket, I think you just walk out with the stuff and they send you a bill, right?

it wasn’t self service but it was good whilst it lasted for a few months !

If you go through the self serve you've made a reasonable effort to pay...if you purposefully avoid the checkout then you haven't.

If I have a trolley I'll use the checkout or self scanning barcode which still gets checked by an operator though basket is self service which is a pita when you have beer as you need an operator to verify your age.

He said baskets/trolleys are randomly checked to make sure they haven't made any mistakes this is usually a case of checking a few items to make sure they have been scanned, i assume if people are aware they can be checked anytime it will put all but the most hardened shoplifter off.
You must log in or register to reply here.
Share:
Facebook Twitter Reddit Pinterest Tumblr WhatsApp Email Link