LAB Open Competition - (results are in)

Completely overwhelmed. I’ve taken 1st in pale and malty lager for my Helles and 4th in Saison/Wheat for my witbier

Delighted to get 3rd in Belgian for my Bière de Garde

Looking forward to seeing the scoresheets now to hear how to improve the beers. I can already see the word “carbonated” on mine, the only surprise will be whether it’s preceded by “under” or “over”! #CarbNemesis

Do we know when the results get posted online?

Edit: just went on LAB website and tomorrow they will be posted.

And congratulations to everyone who has won, placed or has an honourable mention!

It was a great day. Very much enjoyed meeting Alastair and trying his Red Ale, which was dangerously drinkable. His Marzen had mysteriously disappeared. Happy to have scored >35 on my two but clearly would have preferred rosettes! Back to the drawing board once the score sheets arrive…
Last edited: May 15, 2022

Overall scores and scoresheets should be up now.

I got my feedback, my beers did not score well. Surprised my Saison scored so poorly, back to the drawing board

I got a 29 and a 26, actually quite pleased with that score, both judges mentioned that they enjoyed it, that's the main thing I suppose.

They were right in that my pilsner wasn't dry enough, I knew that on first tasting.

38 for the Irish Red and 39 for the Marzen. I’ll post the feedback when it comes trough as promised.

41 for my English IPA - very surprised to have scored that highly. The only negative comment seems to have been that their was a faint metallic taste, although it was described as adding 'interest' rather than being a fault. At a guess, I'd assume that has come from my source water but would need to have more of a think about it.

Alastair70 said:
38 for the Irish Red and 39 for the Marzen. I’ll post the feedback when it comes trough as promised.
Click to expand...

Alastair70 said:
38 for the Irish Red and 39 for the Marzen. I’ll post the feedback when it comes trough as promised.
Click to expand...

There should be a PDF icon in the Actions column of the entries under My Account.

I obviously entered the right categories because the scores are lower than I’d expected for 2 placing beers - 33 for my winning lager and 36 for my 4th place Wit.

I had actually been disappointed with my Helles and was shocked that it won the category - I actually almost switched it for my raspberry sour but glad I didn’t now! One judge liked it much better the other. The lack of aroma and poor head retention appeared to let me down, and it must have lost some carbonation when I bottled from keg. Surprised at the feedback from one judge that it wasn’t malty enough for style but I agree it does lack the breadiness that my previous versions of the beer has shown. However other judge described it as “an excellent showcase of the delicate malt sweetness in a Helles”

Witbier feedback was more consistent, with the same score from both judges although their mouthfeel scores were almost opposites of each other. Unfortunately it was the “intangibles” that let me down, which doesn’t really help me focus on areas to improve but I do think I know what they mean. I was also told I would benefit from reducing the hop flavour, but the only hop addition was 8g Magnum at the beginning of the boil.
Last edited: May 16, 2022

I’m away in the highlands at the moment with crap phone service so only just managed to see the results. Well pleased that my Summit pale ale got 3rd place in the American Pale Ales category. Well done to all THBF members who did well. Great to be able to see the people I’ve learned so much from over the years really do seem to know what they are talking about

I’ve also just realised I came joint second in champion brewer, with me and someone else both having a 1st and a 4th. 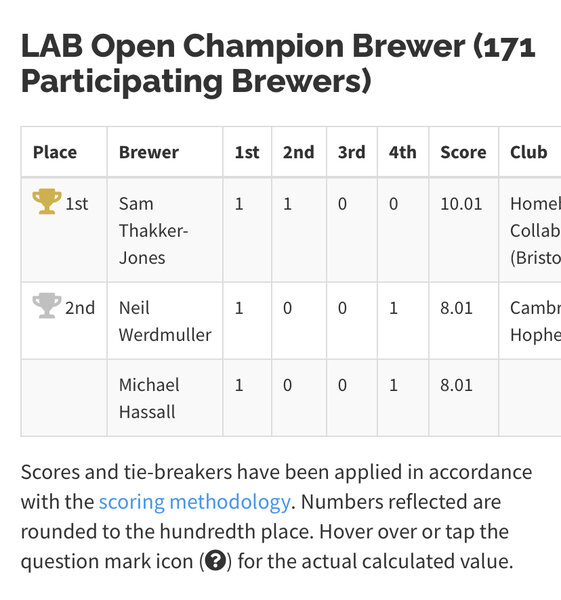 Comments were good flavour, mouthfeel but let down by slight hints of oxidation. I think that had to be from bottling from the keg. The bottles I picked didn't help with the task (had to refull several times due to foaming) so will use something else. I will get some new caps as Christ knows how old the ones I used were and maybe that contributed (if oxygen scavenging function had degraded).

Had this not been an issue I think I'd have got 40+, but still chuffed with my score and for placing in my first competition.

My witbier got 29 overall (scores of 29 and 30). They seemed to like the flavour but carbonation and head retention were off, there was also a lack of haze. I think that was mostly a bottling issue again as drinking from the keg it's well-carbonated, had a thick moussey head and most definitely hazy. I didn't particularly like this beer as think it's a bit too tart, so am satisfied with the score.

I will make sure I test the nukatap bottle filler a few times before my next competition. Probably should have done a few wet runs with it rather than using it for the first time for this competition.
Last edited: May 16, 2022

MickDundee said:
I’ve also just realised I came joint second in champion brewer, with me and someone else both having a 1st and a 4th.View attachment 68496
Click to expand...

Well done Mick, the accolades are piling up!

Lager Than Life 2022 is now open for entries!

LAGER THAN LIFE competition is coming back in 2020