After my previous whoopsie connecting up my keg for the first time, I got a refill SodaStream exchange (*) an have been happily pulling quite decent glasses of a Morgans Old Toucan: serving pressure around 12psi; the kit came with a rather long 3/16 beer pipe which I have not yet cut so it's been a bit slow and not very carbonated but that's fine. Mostly turning off the CO2 at the regulator after pouring. End of last week I left the CO2 tap on the regulator open to try and carb the beer up a bit more. Yesterdy morning I found my SodaStream was totally empty.

When I'd put everything together I had checked for leaks by putting water on the joints (OK, should have been soap solution) and not seen/heard any leaks.

Decided to take the gas pip off the keg and the disconnect came apart in my hand! (See pic) I've managed to find 3 of the 4 little balls and put them back in place then put the two parts together again.

HAs anybody else had a disconnect disintegrate? And could it have been related to my SodaStream gettimg emptied, or was that just gonna happen anyway? Using 425g of CO2 on less than half of a single keg seems a bit steep. 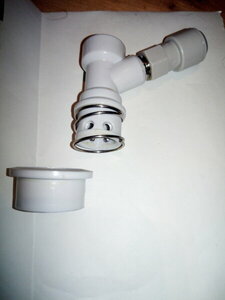 I've had those "skirts" come off, but I can't imagine they'd have anything to do with leaks. But I have had disconnects "leak" elsewhere. The threaded cap can be easily removed (seems to have been designed for a 2p to do the job). Just check the cap O-ring seal isn't damaged; lubricate with a wipe of suitable gel. The pin can also be removed now; check and lubricate the small O-ring on the pin (don't lose the spring and ensure it is restored with the pin). Don't over-tighten the cap, just enough to firmly replace it. The JG adapter screwed on to the disconnect can be removed and the seal on the disconnect lubricated. Reassemble the JG bit only hand-tight - they do break rather easily!

If that still doesn't work check and seal all other links in the gas-pipe. You don't need to use soap; I use the "Star San" solution normally used to sanitise bits and bobs.