NatWest mobile app users are being directed to a warning screen advising them to beware of cryptocurrency scams.

Its not just the mobile app the online banking page also warns you before you can access your account. 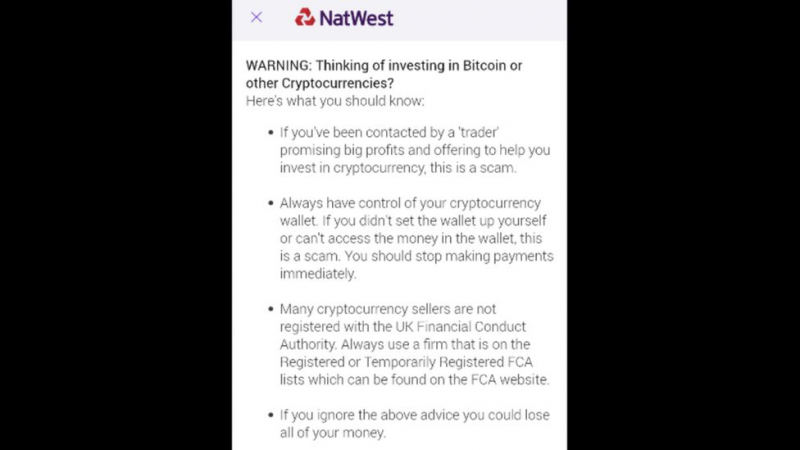 NatWest mobile app users are being directed to a warning screen advising them to beware of cryptocurrency scams.

The bank said it had received a "record number" of reports about such scams between January and March 2021.
The alert warns account holders to make sure they have direct control of any digital wallet that is set up to handle transactions, and to beware of promises of big profits.
One common scam involves fake celebrity endorsement, it said.
Typically, potential investors are prompted to fill in an online contact form and then encouraged over the phone to set up a cryptocurrency wallet - but unknown to them the scammer installs remote access software on their device, granting them access to it as well.
The victim is then persuaded over time to invest ever larger amounts - until the criminal empties the wallet.
Another ruse is the "get rich quick" cryptocurrency investment opportunity, the bank added.
"We have prevented millions of pounds from being sent to crypto-criminals who are exploiting the high levels of interest in the currency. However, consumers should always be alert, especially to the use of fake websites and bogus celebrity endorsements," said Jason Costain, NatWest's head of fraud prevention.
The Financial Conduct Authority has a searchable list of unauthorised firms and individuals offering financial services.
People using these will not be protected by the UK's financial authorities if something goes wrong, the FCA warns.

The app alert, which NatWest said was an urgent reminder, tells customers:
"You could lose all of your money," without following the advice, it warns.
Cryptocurrencies are notoriously volatile in value. This month the price of Bitcoin alone has fluctuated by up to 40% - creating some big winners and losers in the process. It is not regulated by any financial authorities.
There has been a flurry of advertising around crypto-investments on social media, and on Wednesday the Advertising Standards Authority banned an "irresponsible" billboard ad for a cryptocurrency exchange which appeared on London transport.
In the US, cryptocurrency scammers pretending to be Tesla boss Elon Musk made more than $2m (£1.4m) in six months, consumer-protection officials said in May.