Hello all time for upgrade... I'm not getting another Chinese spy phone...don't like Apple...so it's maybe back to Samsung.
What have you got? Why do you like it?

Crappy old Samsung. Don't like it. (any of them)
Probably look at it once a week or so...

Clint i am in the same boat and like this guys review. (phones under £200)

I have the Moto G6 play and might go for the new 9 version.

Hi Clint had hauwei for last few years, just got an iphone 12 and i was not a fan of apple either but , this thing is the best phone i have ever had like having a laptop in your pocket and i don't say that lightly

Moto G8 Power from Tesco - £12.99 a month? I've used the Moto G series of phones for years and cant fault them, they're nippy, and not installed full of crap like Samsung.

I am leaning towards POCO - its name wouldn't put me off but i imagine it could some a bit like KIA when they first started selling cars here and look at them now.

Another very happy user of a Moto Power here - nothing fancy about it but having the huge battery makes such a difference in real life. I used to have an iPhone which wouldn't make it through a day trip to London so I was constantly having to "manage" it just to nurse it through in case I needed to make a "train's late" phone call in the evening. Whereas with the Power I can take it away for a weekend and not have to worry about using it even fairly intensively. So although it's a bit bulky (which is another positive for me, I have big hands) you save on the bulk of having to carry a battery pack and charger.

I would also like a better camera as I think the one I have is a bit average...I'm planning lots of fishing..and I am going to catch some bigguns!

How much are you willing to pay per month maximum?

I bought the Samsung S20+5G and I like it a lot (always used Sony in the past), great camera and video function and super fast, OK not cheap but I got mine from Tesco (an upgrade) and is affordable but depends on what you want to pay for a mobile device.

I was looking at the Samsung Galaxy A41

Tesco Mobile is an MVNO that looks to stand out primarily through good value plans and a large range of Pay As You Go options. It's a fairly conventional network in most ways, but that's no bad thing. It's an O2 MVNO, so as it uses O2's towers it doesn't need to worry about infrastructure of its own. 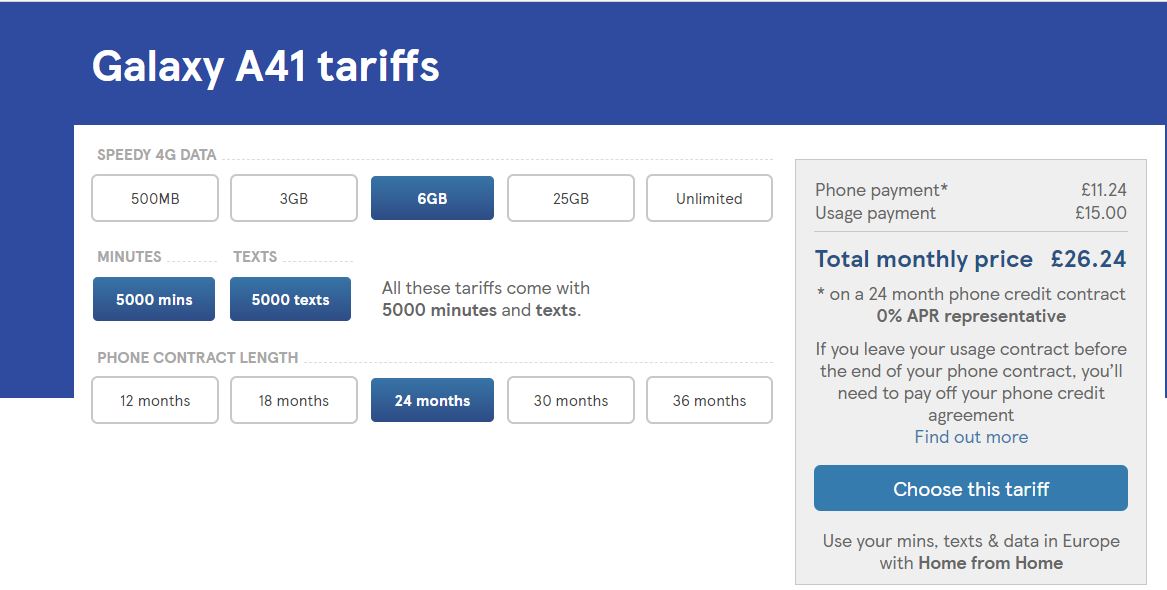 @Clint if your broadband is with BT there is some cracking deals with £5 of for BT customers and double data for those who have Halo.
I have Halo and just changed from
EE who couldn't match the deal which was a Google Pixel 4A,unlimited calls, messages and 30gb data for £17 a month.

Looking for a new mobile phone? Browse our range of pay monthly phones and plans to find the best mobile phone deal for you. Shop online and start saving today.

Another Motorola here.
X4.
Had it nigh on 3 years.
About £200 and carried on with O2 which is cheap month to month now and no contract.

I chose the Moto mainly as at the time it had one of the best batteries along with Lenovo, who now own moto.
Lasted up to 3 times longer than my last Samsung.
It also has turbo charge which charges it in about 20 minutes.
It's a great looking all glass phone too.
It's as good or better than any Samsung I'd had and certainly better than Apple crapple.

The battery still performs well and one of the touches i love about this moto is you shake it twice and the torch comes on.
Twice again for off

Saves faffing about in settings when you need the torch on.

I will definitely be looking at another Moto, best phone I've had and cheaper.

Pixel 4a. You'll get some good deals and the camera is excellent.

I have been trawling through the Internet past few weeks as my teenage boy mobile phone contract is out in December.

Like you I dont like Apple and love Samsung mobile phones. I have found a cracking deal on the S20 FE which is a top end phone that will meet your budget with 45gb of data unlimited minutes and text

obviously priced in the monthly contract bill.
He broke the screen not long after and it cost twice as much as my moto

Oh, my moto is waterproof too