One-way ticket to Rwanda for some UK asylum seekers

Come to the UK and get a 4000 mile one way ticket to Rwanda.

People are phoning 5 live saying this is a disgrace its sexist and Rwanda have a terrible human rights record.

Many are saying its all about stopping the UK being the first choice for these people are they right?

Some asylum seekers who cross the Channel to the UK will be given a one-way ticket to Rwanda under new government plans.
The pilot scheme will focus on single men arriving on boats or lorries.
Prime Minister Boris Johnson said the £120m scheme would "save countless lives" from human trafficking.
Refugee organisations have criticised the plan as cruel. They questioned its cost and impact and raised concerns about Rwanda's human rights record.
Mr Johnson said action was needed to stop "vile people smugglers" turning the ocean into a "watery graveyard", with the plan designed to break their business model.
"Our compassion may be infinite but our capacity to help people is not," he said. "We can't ask the British taxpayer to write a blank cheque to cover the costs of anyone who might want to come and live here."

Those who succeed in making it to the UK "will be taken not to hotels at vast public expense", the prime minister said, and instead would be housed in detention centres.
Speaking in Kent, he said the new plan would "over time prove a very considerable deterrent".
Labour leader Sir Keir Starmer described the scheme as "unworkable" and "extortionate", claiming it was an attempt to distract from Mr Johnson's "partygate" fine.
Last year, 28,526 people are known to have crossed in small boats, up from 8,404 in 2020. About 600 people made the crossing on Wednesday - the figure could reach 1,000 a day in coming weeks, Mr Johnson said.
The number of people who can be relocated will be "unlimited", said Mr Johnson.
Rwanda will have the "capacity to resettle tens of thousands of people in the years ahead", including those who have arrived "illegally" since the start of the year, he said.

"We cannot sustain a parallel illegal system," said the prime minister. "Our compassion may be infinite, but our capacity to help people is not."
Home Secretary Priti Patel, who travelled to Rwandan capital Kigali to sign the deal, said it was a "global first and it will change the way we collectively tackle illegal migration".
She said the "vast majority" of those arriving in the UK "illegally" would be considered for relocation to Rwanda.

Recent research by Ipsos Mori suggested 60% of the public were dissatisfied with the government's migration policy - more than half of which cited Channel crossings. 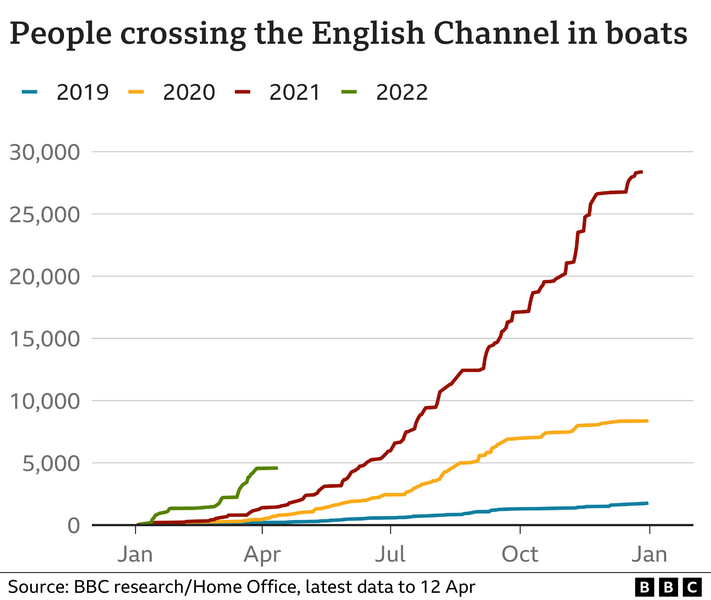 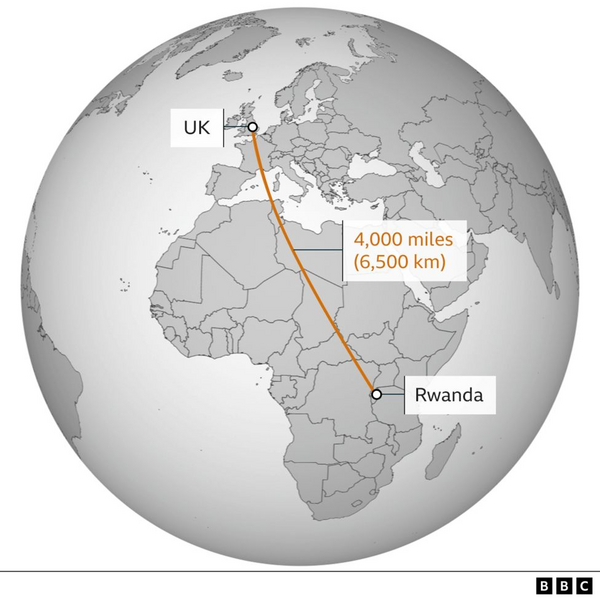 Several people that called 5 live today suggested they should seek asylum in the nearest safe country to theirs and i agree.

Maybe they are Arsenal fans... 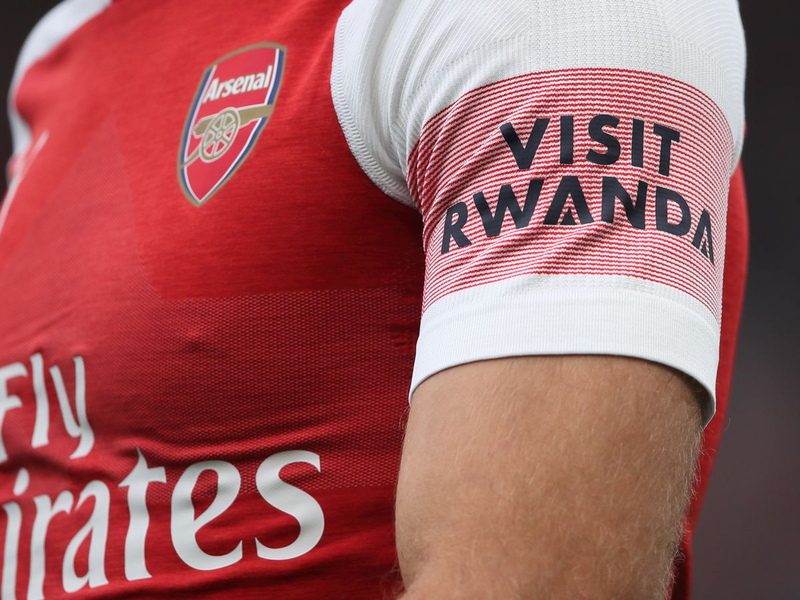 We let asylum seekers seek asylum in the UK and for each one that arrives we deport a Tory to Rwanda.

Damage limitation by the conservatives, expect a lot more of this i would even predict fuel and cost of living to come down between now and next election

I am not sure why they chose Rwand Clint but it would seem the idea is to put refugees off trying to get here by boat knowing they will be sent straight to Rwanda when (if) they manage to make it here.

Enver Solomon, the chief executive of the Refugee Council, said the government had violated the principle of the UN convention, of which the UK was a founding signatory, to “grant people a fair hearing on UK soil”.
Speaking on the Today programme, he said: “I think it’s rather extraordinary the government is obsessing with control instead of focusing on competence and compassion.”

He added the plan was unlikely to discourage people from undertaking dangerous journeys to flee persecution, and recommended instead that dialogue be opened with other European countries about how to encourage safe routes to asylum, including by allowing people to apply for visas in embassies around the world.

How will it work?

Mr Johnson said that from Thursday "anyone entering the UK illegally, as well as those who have arrived illegally since 1 January, may now be relocated to Rwanda".

Home Office officials told a news briefing the new scheme will primarily be for adults and not specific to any gender, but families could be relocated there together in exceptional circumstances.

Migrants who are not eligible for asylum in the UK will be detained here while their suitability for relocation is assessed.

They will then board chartered flights to Rwanda, where they will enter the Rwandan asylum system and not be considered for return to the UK.

Initially they will placed in temporary accommodation while their applications are considered - a process that will take around three months.

This will not be a period of detention and migrants will be free to come and go as they please, Rwandan officials told the briefing.

A criminal record may mean an application is rejected, but this will be examined on a case-by-case basis, they added.

If they choose not to stay in Rwanda, authorities there will ensure their safe return to their country or a third receiver country, under the terms of the UN's refugee charter.

The PM said the migration route to Rwanda is "uncapped" and will be in place for the "foreseeable future".

"Rwanda will have the capacity to resettle tens of thousands of people in the years ahead," he said.

Asked about reports of human rights abuses in detention centres in Rwanda, Mr Johnson described it as "one of the safest countries in the world… globally recognised for welcoming migrants".

He said it had "totally transformed over the past few decades" and warned people against "stereotyping" it as a nation.

"We have a high degree of confidence about how people will be received in Rwanda," he said, adding that the new scheme is the result of nine months of detailed preparations.

Quizzed on the costs of the new partnership, which some have estimated at more than £1m per person, he claimed the current cost of housing migrants in hotels in the UK is £5m a day.

Why are migrants being sent to Rwanda and how will it work?

Prime Minister Boris Johnson has said that from 14 April anyone arriving illegally in the UK – or from 1 January this year – may be sent to Rwanda where they will be offered permanent residency or sent back to their country of origin.

Did I read that most are single males? Why not have a foreign legion? Do three years,get a citizenship.
Do we still have a lack of cabbage pickers? Seems this is a problem but maybe not so much as we're due refugees.
Also...what will they do in Rwanda? What is Rwanda to the UK?

Location
up near the pike. Co. Durham.

looks like the government are hoping that the chance of getting put on a one way trip to Rwanda will put the immigrants off from coming to the UK?
something needs doing, thats for sure but id be very surprised if this actually happens.

mickthetrick said:
something needs doing, thats for sure but id be very surprised if this actually happens.
Click to expand...

I will be surprised if it ever happens but i think the threat may have the desired effect, they will never publish figures so those who may have once risked it may decide it is no longer worth the risk.

One thing it isn't about is taking action against criminal gangs of people traffickers.

How do they get Rwanda to agree to take these people on? Haven't they got enough problems of their own? Did they go round all the African States asking who wants this lot?
To make it viable they're not going to send as they arrive...they'll have to fill a boat or plane. Where will these detention centres be? For sure they're not going to let them off the boat and say ",there you go,off you pop.."

@Clint
I had a quick search and don't seem to be able to find any reason why they decided Rwanda was the best place to send them i guess more info will come out over the next 24 hours.

Because other countries have sent people to Rwanda in the same way?

And they get the Rwandans to 'take this on' by paying them, of course. God knows that this would all cost.

If it ever happens.

moto748 said:
And they get the Rwandans to 'take this on' by paying them, of course. God knows that this would all cost.
Click to expand...

Early in the video i posted above he says we have since 2015 welcomed 185,000 refugees into the country and housing them in hotels costs £5 million a day i have a feeling todays announcement will mean the future cost will be much lower, i also wonder how many of those 185,000 will be going to Rwanda or are they already here to stay?

So,UK will pay the Rwandan government to "look after" them?

Nazanin Zaghari-Ratcliffe sentenced to a year in Iran prison