Hmm, let me think.
Cycling & maintainence. A long way from cycle club performance, but a bit faster than the vicar on his Pashley.

Lego - Its mine, the kids are not having it. I even have folders of the original instructions

Attempting to volunteer at a local 'living' museum with my daughter - this is something new I am trying.

Online mmorpg - specifically runescape as I've played it on/off for years. Currently back to playing it after a 3 year break

Oh & I got some old RC boat models/motors & bits in the roof that I should get rid of at some point.

I play a bit of Minecraft. My son is completely obsessed with it lol.

I used to play a lot of golf before I had kids. Now it's Running, Brewing, Gardening, watching my kids play Camogie & Gaelic Football and recently over lockdown I've got back into DnD.

It's funny what you've time for when you give up Golf :)

Collecting Continental beer glasses (must have something to put the fruits of my labour in after all...) 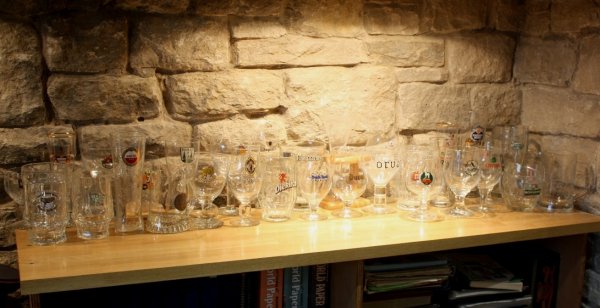 (I used to have quite a few more, but several house moves later...

What a brilliant thread, I'm impressed by how varied and active so many are here. The comment 'children' does fit though, they might be mostly in their teens and while not calling them a hobby - yes they do fill our lives.

So my hobbies, I love cooking. Yes that's partly through necessity for a family of five, but I enjoy trying new techniques, new flavours and new cultures. My children and OH are usually happy to try my experiments though my teenage son isn't always keen on the vegetarian ideas! Sunday is for roasts and it's one of the meals I can feel confident about and I do some pretty smart roast potatoes that are super crispy and stay crispy even with gravy - yes they may take several hours to prepare but it really is worth it. Brewing is for me like very slow cooking, it's another cooking technique all be it with rather more technical terms than most. I like making cakes but am far from an expert, but love making detailed birthday cakes for the children, the picture below is the dragon I made for my youngest this year - though I don't have a finished picture when I added the 'ground' in desiccated coconut. 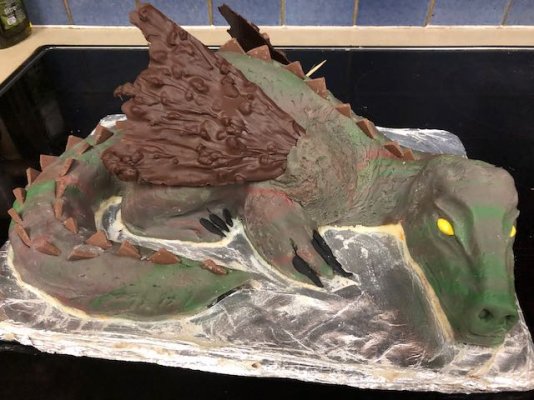 I'm also interested in all things IT, I worked in ehealth for a health board for quite a few years so know far more than is healthy about HL7 and coding ontologies. I am though an Apple enthusiast and use PC's under sufferance, and have thoroughly drunk from the Steve Jobs Kool Aid with a household infused with all things Apple :)

DocAnna said:
I worked in ehealth for a health board for quite a few years so know far more than is healthy about HL7 and coding ontologies.
Click to expand...

I worked for medical information company for many years facilitating data transfer and did a bit of field engineering visiting GP's surgeries.

LED_ZEP said:
I worked for medical information company for many years facilitating data transfer and did a bit of field engineering visiting GP's surgeries.
Click to expand...

Data transfer is an arcane art, matching rules across systems that aren’t really designed to talk to each other but persuading them to do so anyway. I rather miss it really, there were some lovely and super clever people I worked with there.
As for GP surgeries - dangerous places to venture in to for those in IT: printers that jammed, unexplained errors and the computers were always too slow - well they were in mine

Not a hobby exactly, but been visiting the gym on a daily base since a few months. No particular target, just to get exercise. 45 minutes and I'm done.

@GerritT I hear you!

45 minutes on the machines and the rest of the morning chatting (or is that just me?)

I started last year after living on steroids for a few years.
I lost 4st before lockdown kicked in, beer and cake took the edge off the losses

Been back to the gym for a few weeks now and I'm back on track to get healthy(-er).
I couldn't believe how all the muscle aches hit again on the return, still I'm passed that and I'm seeing lifting gains at last!

I've set myself a weight target and a plan to increase general fitness - flexibility and an increase in muscle gains.

I'm loving the return to the gym for just the social aspects let alone the improvements to my general wellbeing.
I find that it helps with the mental health aspects as well, no bad thing.
It helps that the boss has joined as well and goes to Pilates / yoga classes

ChilledGecko said:
I couldn't believe how all the muscle aches hit again on the return, still I'm passed that and I'm seeing lifting gains at last!
Click to expand...

I am feeling your pain. Right now in fact! First visit back to the gym last week after spending lockdown doing nothing but cycling and running. Man my chest is so painful. It's surprising and rather depressing how quick you lose the muscle. Good to get back to it though.

Apart from the gym and the exercise. I'm also a keen cook - I think this goes well with creativity of brewing. I'm a big DIY'er - in the middle of a house build featuring a brew room. I like to do some artwork although I've not done much recently. I play guitar well enough to jam with others. And I enjoy video games - currently loving taking my time with Red Dead 2 - I can spend hours just wandering around, taking in the scenery.

Hi all, love this thread Brewers' other hobbies.
Most of mine have been covered:
Cycling locally, (and the collection and restoration of Reynolds 531 classic hand built British framed bikes - hence my identity '5').
Skiing in France/Austria/Italy/Japan /Australia wherever I'm travelling and find some snow!
Walking with my wife (the Cross Country 'public rights of way' Ordnance Survey map sort of walking).
Old car and motorcycle use and maintenance.
There is one hobby of mine though that I haven't seen here yet - old Mechanical Watch (tick-tocks) servicing and collecting. Wrist and fob (pocket) not clocks, though. I leave that to other people.
Just to dispel a common misconception, the little front pocket in 5 pocket Levis and other jeans is often called a 'coin pocket'. It's really a fob watch pocket as it was much safer than in a waistcoat when used on horseback. Those pocket watches were a slightly smaller size as they were for 'use', not a wealth statement. 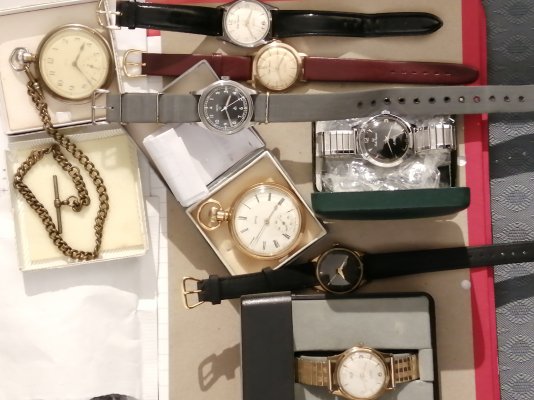 As you can see, I now have a preference for the old English maker of high grade movements in any quantity, Smiths.
Unfortunately ceased making high grade watch movements in Cheltenham around 1970.
I do have a lot of Swiss and Japanese watches as well. Helped to develop (practice) fettling techniques and skills.
Generally cheaper to buy as there are more of them available.
OK to be honest I have worked on one or two clocks, but just as a favour/aside for others.
And I do have a penchant for some quartz movement watches like older TAG/Heuer dive-style ones, and change batteries and even entire movements if required for friends and family.

No, 45 minutes on the machines. Schooldays at 20:50, weekends at 09:00. Few people chat, most people do their rounds. Apart from the occasional greeting, hardly a word is exchanged. Only 45 people are allowed inside, to keep the distance possible.

I quit in June with painkillers, after over a decade of use. Same day I decided to go to the gym on a daily base. Not for weight, I went from 230 lbs in April to 235 last weekend, and it will probably stay stable. I train to get the core stable, to avoid the instability that caused the use of painkillers.

So far so good.

Harbey said:
I am feeling your pain. Right now in fact! First visit back to the gym last week after spending lockdown doing nothing but cycling and running. Man my chest is so painful. It's surprising and rather depressing how quick you lose the muscle. Good to get back to it though.
Click to expand...

I have learnt from the gym staff that the pain encountered after exercise has a name!
It's called DOMS - Delayed Onset Muscle Soreness
I now tell people I'm suffering from DOMS and as they don't know what I'm talking about they change the subject

It's better than saying "I've knackered myself at the gym"

Basically...your work out damages the muscle...that's why it hurts...it repairs itself stronger and bigger. Rest days are important.

Clint said:
Basically...your work out damages the muscle...that's why it hurts...it repairs itself stronger and bigger. Rest days are important.
Click to expand...

No skip days, no cardio.

Caving, I spent many years exploring caves and cave diving. It took me a long time to realise there were other things to do in life.

I see loads of people in my gym who never touch the free weights/barbell, I I've always wondered why?

strange-steve said:
I see loads of people in my gym who never touch the free weights/barbell, I I've always wondered why?
Click to expand...