Pale Horse, a lager if you please?!

Ok, so I'm using the term 'Lager' in it's literal sense, so don't throw anything at me (just yet). This was my 4th brew, the previous 3 were mainly generic 'English ale' styles, and were all drinkable enough. My first brew (Wriggley Pig) was spoilt in the main by my impatience, the beer was simply too green, the second (Bitter #1) was able to mature by at least a week longer, as I had the WP to satiate me! Brew 3 was called 'The Bavarian' brewed using a lager yeast which kind of inspired me to go more that way.
No. 4 was named 'Pale Horse' and it's this recipe I've decided to post here as it was soooooo damned good! I know it's a very subjective subject but I gave two bottles to an allotment neighbor of mine (giving instructions on chilling and pouring!!) and he text ed me to tell me it was 'F******* great'! Praise indeed I thought.

I've mentioned on this forum vague things about kegging and gas etc, but I have found that the great super-un-sexy brown PET 500ml bottle is much mailgned! Unfairly I say, as once sterilised the primed fermented stuff is easily injected with the aid of a Little Bottler and then sealed, all that's left is to ferment out the primings and then 'Lager' in a fridge. For the sake of my marriage, I am unable to place anything larger than a couple of bottles in our fridge, so again the humble bottle is stealthy too.

Mashed for 60 mins @ 67c
Then 78c for 15 mins (tghat's how the Klarstein controller was programmed, no other reason!)
pulled up the grain tube and sparged with the water I'd set aside earlier. I also attach a silicone tube to the sparge pump so I can spray the wort over the grains whilst sparging (I'm sure it has a technical name!)
This process takes about 20 mins, in which I stir the grains to get all the moisture out. It's then fed to my allotment chum's hens.

Next, the wort was boiled for 1 hour with the following hop additions:
60 mins: 25g Citra + 25g Mosaic (pellet)
15 mins 50g Columbus (pellet) + 1/2 protofloc tablet.
Transferred to FV at c. 80c and left to garage cool overnight with lid clipped on.

I pitched the yeast 1x Mangrove Jack's Bohemian Lager yeast at c. 20c
The Starting gravity was 1050, which seemed about right for this volume of wort.

I let it ferment for 7 days, and got a reading of about 1010, so added 180g of brewing sugar to a clean FM and then bottled the brew.
I gave it a week in a warm position, then moved to a slightly cooler local (i.e 4ft lower in the same room!).

The beer struck me as to the beautiful almost yellow colour (in a good way!) and the carbonation was amazing, far better than my kegging attempts, put simply I would have paid money for it!
I guess it's best cold, as these styles of beer are served, but it does take on a more 'aley' taste when drunk at around 15c, so you decide! As I say, it really gave me inspiration to carry on, it wasn't perfect I'm sure, but was definitely a beer lovers treat. Just hope it wasn't a one-off!!!

Edit: It had a distinct dry feel on the tongue which I like, and a faint flowery bouquet/nose just a hint of the hops underneath. The yeast could be tasted in the mix, but I do recall tasting beers like this in Germany and the Czech republic when I was over there back in the 80's after the independence jovialities.
Last edited: Aug 6, 2020

Sounds great! Do you have a photo of it in a glass?

What caught my attention is I made a beer a while back called pale horse as well. It was also a hoppy lager, not too dissimilar to your recipe and was one of the better beers I made as well. I used Columbus and cascade for hop additions.

jceg316 said:
Sounds great! Do you have a photo of it in a glass?

What caught my attention is I made a beer a while back called pale horse as well. It was also a hoppy lager, not too dissimilar to your recipe and was one of the better beers I made as well. I used Columbus and cascade for hop additions.
Click to expand...

Hi! Yes, I posted it on another thread: 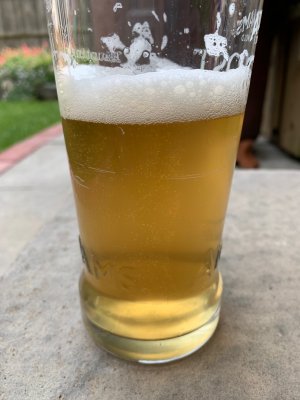 As I say, it exceeded my expectations by degrees, seeing as there's a lot of mystery surrounding these Pilsner styles, and ideally they need to be fermented at low temps, something I'm unable to at present without a brew fridge.