Covrich said:
The services near me people were not so eager.

I was in Witney outside Oxford last week to fill the car as I was heading to Windsor then on to Manchester so stopped for fuel @£1.36.9 per litre which is shocking only to find I had lifted the nozzle for premium diesel which I never saw in my life and it was £1.56 a litre. You surely get ripped off for fuel as I filled my car before I left on the Sunday evening for £1.18 per litre in Donegal which is 15p per litre cheaper than Derry and the ironic thing is it is imported from NI to Donegal... 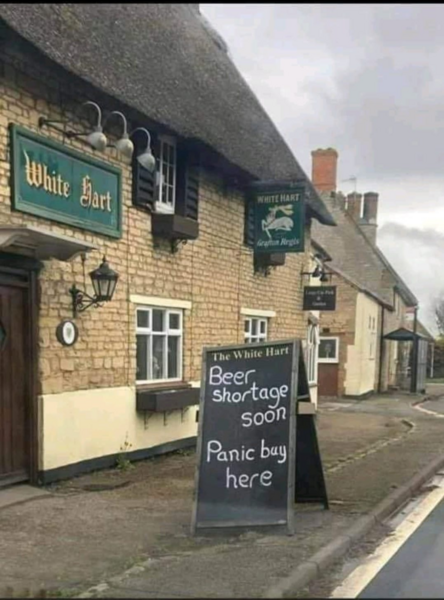 I saw this earlier, crazy people. 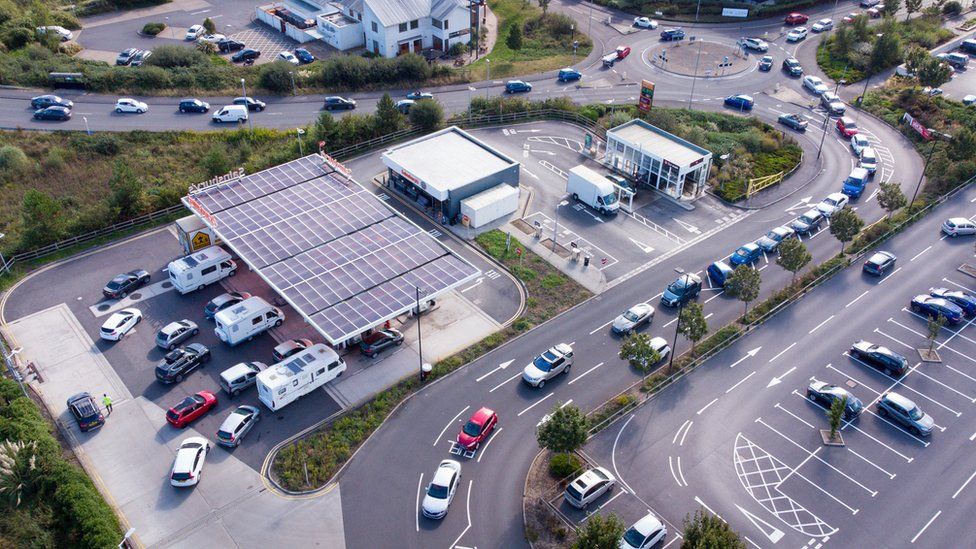 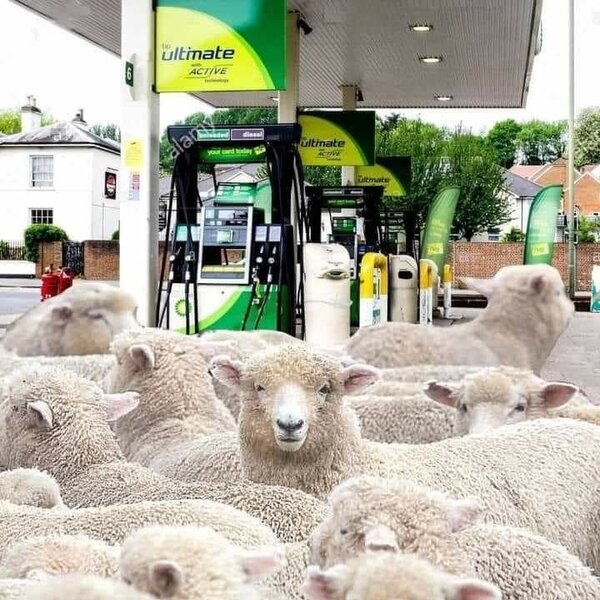 Well I’m panicking, but not buying. I’m on the Isle of Wight in my camper van, which is running on fumes. Not due back on the mainland til Friday, I’m just hoping that the Morrison’s down the road will have some weasel because I haven’t got enough to drive around looking for it. On another note, my wife read on fakebook that there’s now a shortage of sperm donors because all the [email protected] are out buying fuel.

Using the wrong container is no joke :

The bottom line is there is no shortage there is a shortage of drivers but that shortage has been here for years its not a new thing its the T.V news and papers doing what they do best scaremongering, stop panic buying and it'll be back to normal in no time.

I was come back from holiday 9 days ago pulled into a BP garage on the A40 near Oxford and there was no fuel and this was before the BBC, ITV, the sun and the daily wail put out the story so although they have made the situation a lot worse this was happening before. Unfortunately I had to use a motorway service station and pay rip of prices.

My planned road trip to Scotland in 2 weeks is looking increasingly unlikely. I don’t mind queuing for a short while for diesel but there no way I’m queuing for hours.

Panic buying is great because it demonstrates to one how terribly considerate their fellow man is in times of stress or perceived stress. /s
Last edited: Sep 26, 2021

On sunny Sundays it's become a habit for me and the missus to go for a blast on the ol' 1988 Yam 1200. Went to put some juice in yesterday but they were out of E5. Figuring I'd be wasting my time looking elsewhere I added a tenner's worth of E10 to top the tank off. I knew I'd soon get through it and be adding E5 again and reckoned no harm would be done. Well, half a mile down the road and the normally turbine-smooth motor just felt out of sorts and the rest of our 100-mile trip was plagued with an occasional misfire followed by surging acceleration. I recently overhauled the ignition system with new everything and that is 100% perfect. Beware the E10... it is poison. Gonna run the bike to near empty and use E5 only.

Gunge said:
Beware the E10... it is poison. Gonna run the bike to near empty and use E5 only.
Click to expand...

I have been using Shell V-power in the car since the switch its the most expensive premium unleaded out there but does have the engine and fuel system cleaner in it, i visited Tesco in the next town the other day (pre panic) and their premium unleaded isn't much more than the standard unleaded in the big name garages.

I checked the site below for super unleaded when posting this -

Tesco is not listed.

Find the cheapest UK fuel prices and compare petrol, diesel, premium fuel and LPG prices near you for free! Members can save on average over £200/year.

DavidDetroit said:
Panic buying is great because it demonstrates to one how terribly considerate their fellow man is in times of stress or perceived stress. /s
Click to expand...

If it was a Hollywood movie we'd all be chucking dustbins through shop windows and running off with fifty inch TVs.

Chippy_Tea said:
stop panic buying and it'll be back to normal in no time.
Click to expand...

Hopefully fuel is the sort of thing people can only panic buy as a one time thing (hopefully!). Once the tank is full that's that. Unless people are stupid enough to try stockpiling it!

I was supposed to be doing a 200ish mile trip this weekend but I have yet to fill up and I know the tank is low so I'm not sure if I'll be able to or if I'll have to change my plans.

Jim Brewster said:
Hopefully fuel is the sort of thing people can only panic buy as a one time thing (hopefully!). Once the tank is full that's that. Unless people are stupid enough to try stockpiling it!

I was supposed to be doing a 200ish mile trip this weekend but I have yet to fill up and I know the tank is low so I'm not sure if I'll be able to or if I'll have to change my plans.
Click to expand...

What do you mean "UNLESS"?!!!! There is absolutely no doubt that people are stupid (and selfish) enough

Fuel supply: UK suspends competition law to get petrol to forecourts
The government is to suspend competition law to allow oil firms to target fuel deliveries at petrol stations following recent panic buying.
Officials said the move would make it easier for companies to share information and prioritise parts of the country most at need.
It follows days of long queues at the pumps, after fears of disruption to the fuel supply sparked panic buying.
But a minister said there were no plans to bring in the Army to drive tankers.
The government has been considering using the Army, but Environment Secretary George Eustice said the shortage of drivers was "not a huge problem".
"The only reason we don't have petrol on forecourts is people are buying petrol when they don't need it," he said, predicting that things would "calm down" once anxious people had filled their cars.
The Petrol Retailers Association has warned that as many as two-thirds of its membership of nearly 5,500 independent outlets are out of fuel, with the rest of them "partly dry and running out soon". The UK has a total of more than 8,000 filling stations.
Announcing the measure to exempt the oil industry from the Competition Act 1998, Business Secretary Kwasi Kwarteng said the government had "long-standing" contingency plans to maintain fuel supplies.
He said allowing the industry to share information would mean companies could work together more effectively to minimise disruption.
The government also relaxed competition law in March 2020, to help supermarkets work together to maintain food supplies.


A shortage of lorry drivers has caused problems for a range of industries in recent months, from supermarkets to fast food chains.
In recent days, some fuel deliveries were affected, leading to panic buying and lengthy queues at some petrol stations.
In a joint statement from companies including Shell, ExxonMobil and Greenergy, the industry reiterated that pressures on supply were being caused by "temporary spikes in customer demand - not a national shortage of fuel".
PRA chairman Brian Madderson told the BBC the shortages were down to "panic buying, pure and simple", with oil companies prioritising keeping motorway service station pumps topped up. 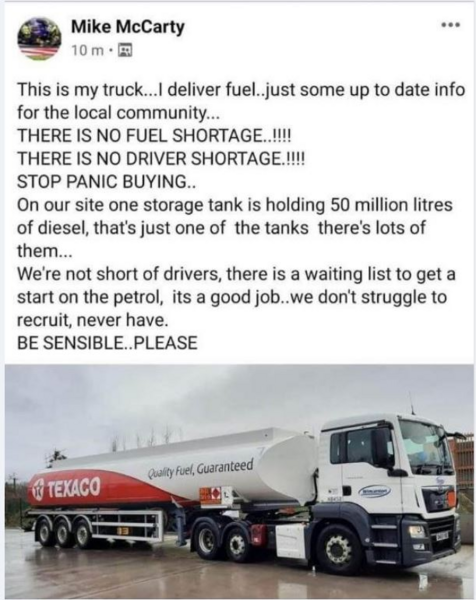