I bet he is sweating now - 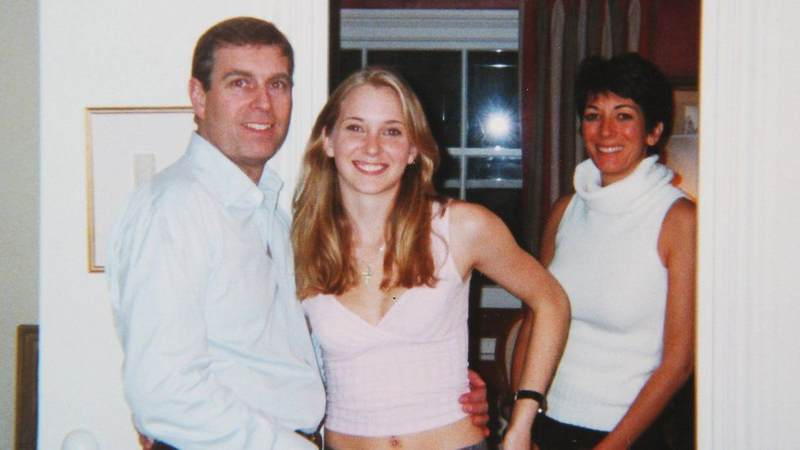 Prince Andrew has failed in his bid to get a civil case which alleges he sexually assaulted Virginia Giuffre dismissed by a US judge.
Ms Giuffre is suing the prince claiming he abused her when she was 17.
His lawyers said the case should be thrown out, citing a 2009 deal she signed with convicted sex offender Jeffrey Epstein. But a New York judge ruled that the claim could be heard.
Prince Andrew has consistently denied the allegations.
The motion to dismiss the lawsuit was outlined in a 46-page decision by Judge Lewis A Kaplan of the United States District Court for the Southern District of New York.
In court documents, Ms Giuffre said she was the victim of sex trafficking and abuse by late billionaire financier Epstein.
Part of her abuse involved being lent out to other powerful men, she alleges.
Prince Andrew, the Queen's second son, said in an interview with BBC Newsnight in 2019 that he had no recollection of ever meeting Virginia Giuffre, and her account of them having sex "didn't happen".

His lawyers had argued that Ms Giuffre agreed in court in 2009 not to sue anyone else connected to Epstein when she settled her damages claim against the billionaire sex offender.
During a virtual hearing they said the Duke of York was a "potential defendant" as defined by the agreement and the case "should be dismissed".
Ms Giuffre's lawyer said only the parties of the settlement agreement could benefit from it, and not a "third party".
In his decision, Judge Kaplan said the agreement "cannot be said" to benefit the Duke of York.
He said his ruling did not consider the "defendant's efforts to cast doubt on the truth of Ms Giuffre's allegations, even though his efforts would be permissible at trial".
He added: "In a similar vein and for similar reasons, it is not open to the court now to decide, as a matter of fact, just what the parties to the release in the 2009 settlement agreement signed by Ms Giuffre and Jeffrey Epstein actually meant."

Virginia Giuffre's claims against the Duke of York can continue to be heard, a US court says.
www.bbc.co.uk
Last edited: Jan 12, 2022 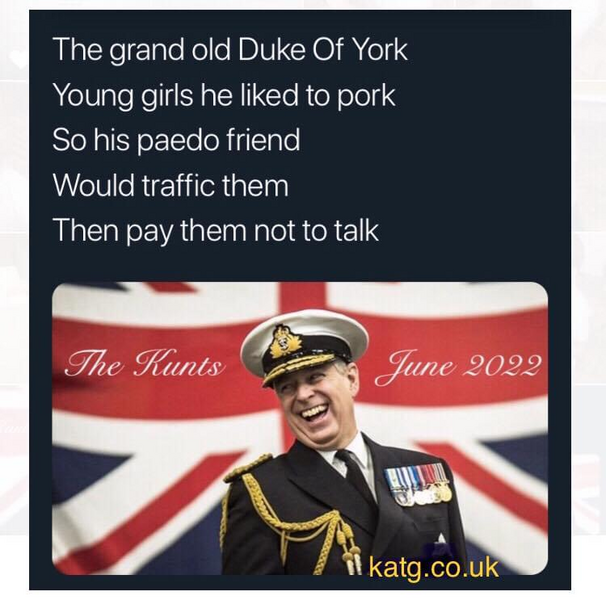 The UK and US could solve this with a "prisoner" exchange. An alleged sexual predator for an alleged dangerous driver / killer: 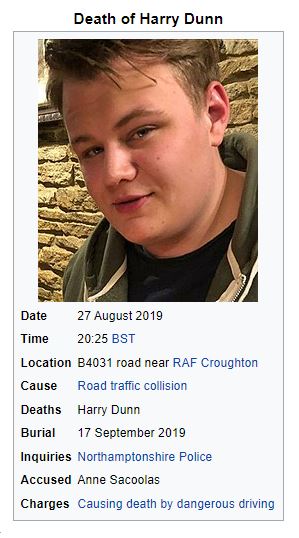 Death of Harry Dunn - Wikipedia
Hmm ... a Mrs Nobody for a Prince of the Realm. Nah, doesn't add up does it.

We will see the end of it when justice is done if Andrew did what he has been accused of and has lied all this time he deserves everything he gets.

Do you not think the Dunn family also deserve justice?
Last edited: Jan 12, 2022

Complete NONCE get him in the bin.

It will be settled by a big pay off, Mum will foot the bill which really means us the tax payer will pay.

Chippy_Tea said:
... Do you not think the Dunn family also deserve justice?
Click to expand...

Don't matter what I think, they wont get it. Meanwhile, we'll oblige with our "Britain last" attitude and allow our Royal family (not just Prince Andrew) to be dragged through the dirt by some insignificant (yet privileged) foreign tart who's figured she can make a few bob out of this.

So in your strange world under age girls who are trafficked for sex are tarts.

BBC news -
The Duke of York has been accused of sexual abuse in a civil case in the US. His former friend, Ghislaine Maxwell, has been found guilty of recruiting and trafficking underage girls to be sexually abused by the late billionaire paedophile Jeffrey Epstein, who was also an ex-associate of the duke.
Last edited: Jan 13, 2022

If Andrew has nothing to hide why was he trying to hide behind the silence agreement Epstein set up?

You’d think the men in the royal family would learn to avoid American women.

Chippy_Tea said:
So in your strange world under age girls who are trafficked for sex are tarts.
Click to expand...

In my "strange world" I'd chuck people who think it's cool to put words into another's mouth in a nearby river.


Brianbrewed said:
Why do you think she is a 'tart'?
Click to expand...

Don't know. 'Cos she looks like pastry stuffed with jam?


Tish, I seem to be a little out-of-step with others here-abouts. I'll see if I can drag up some recent Oprah Winfrey programs to realign my thinking. I'll have to practice my looks of "shock" in front of a mirror (like she does?) ... I'll get to it.

peebee said:
In my "strange world" I'd chuck people who think it's cool to put words into another's mouth in a nearby river.
Don't know. 'Cos she looks like pastry stuffed with jam?
Click to expand...

You appear to have dodged my original question -

Do you consider all under age girls who are trafficked for sex tarts?
Last edited: Jan 13, 2022

peebee said:
insignificant (yet privileged) foreign tart who's figured she can make a few bob out of this.
Click to expand...

90%-96% of sexual assault claims are legitimate. In this case with Epstein and the prince, it appears quite likely.
Our former US president speaks with much the same rhetoric as you (Britain last, denigrating the accuser). Number 45 has/had 20+ claims against him. He's on the hook for at least 18. Consider how many females want nothing to do with having their names dragged through the mud. The number is easily higher.
Edit: where does "privilege" come in with that minor at the time?

johnny108 said:
You’d think the men in the royal family would learn to avoid American women.
Click to expand...

And illegal sexual contact with British women I would expect? You're kind of denigrating UK women with that comment--like a UK woman would put up with sexual assault.
Well over 90% of sexual assault claims are legitimate.

Chippy_Tea said:
If Andrew has nothing to hide why was he trying to hide behind the silence agreement Epstein set up?
Click to expand...

Exactly.
The best defense they can muster is that?
It's pathetic.

It does raise the question as to why the girl took "silence" money in the first place. Would she take more or would she just be happy with a conviction,or do both go hand in hand?
Plus do Princey's lawyers really believe that the "contract " signed by the girl and Epstein, excluding any others involved to prosecution etc., is a legitimate document? If so,why not get another proclaiming her a witch and burn her?
I think she'll be signing more documents, get lots of money and...disappear.

More or less, kids under 25 have an infinite capacity for stupidity.
Making a contract with regard to illegal sex with a child is _________ (insert all the disparaging adjectives you can).

Just in case you’re worried it’ll happen to you to:

AS Prince Andrew will attest, it’s hard to tell if a friend is running a high-end sex trafficking operation. Look out for these subtle clues next time you pop round.