My children know that I have spent an inordinate amount of time trying to work out how to cook the perfect roasted potato! The problem is that most roasted potatoes are crunchy when you take them out of the oven but very quickly go soft and certainly don’t stay crunchy when you add gravy. I spent about a year of Sundays trying different techniques, as per the Internet, to create perfect roast potatoes.
It being a Sunday, and I’m cooking my usual potatoes now, I thought it might be worth sharing my experience and eventual findings.

There are various techniques described on the Internet for roasted potatoes, some involve using animal fats (Goose or beef fat), some a very high temperature and some using cornflour. Each of these have merits, but it’s either expensive or results in a crunchy potato which resembles a golf ball in hardness - e.g.the cornflour method.
I eventually landed on a method which adapted Heston Blumenthal’s triple cooked chips technique for roasted potatoes.

I do benefit from having a thermostatic controlled deep fat fryer which it would be difficult to make these without. However what I end up with now is crispy light roasted potatoes that stay crispy over time including adding gravy, but are not too hard to eat. Sadly this is what my children have got used to and I make these most Sundays now.
Start with a proper roasted potato variety, either King Edward or Maris Piper. These should be cut into pieces not larger than a typical lime. contrary to the usual technique for boiling potatoes, these should be added to boiling salted water, which ensures the outside is cooked more than the inside. Cook until the outside of the potato is soft. I use a barbecue round skewer to test them which should easily pass through the potato - about 8 - 10 mins. Drain and tip between the colander and the pain two or three times until the outside of the potatoes is fluffy. Now leave these to cool thoroughly, I put the colander outside or in the garage, for about an hour at the minimum.
deep fry at 120° for approximately eight minutes, the outside crispy bits should look lightly golden. Allow to cool again, typically at least half an hour. If time is short they can be taken straight from this step to a hot oven, but the coating will be lighter and more chip like than a roast potato if you do so.
Roast in the bottom of a hot oven, at least 200 C fan, 220 C conventional for 30 to 40 minutes depending on the size of the potatoes and how dark you like them.
these can be frozen after the deep frying stage and used similar to supermarket bought roast potatoes add five minutes onto the cooking time. Cooking in a hot oven will not necessarily shorten the time required, but will make them darker with a thinner crust.

. I have also tried pomme Anna but the amount of butter involved is a bit much!

Oh this is tonight’s potatoes after their deep fry step. 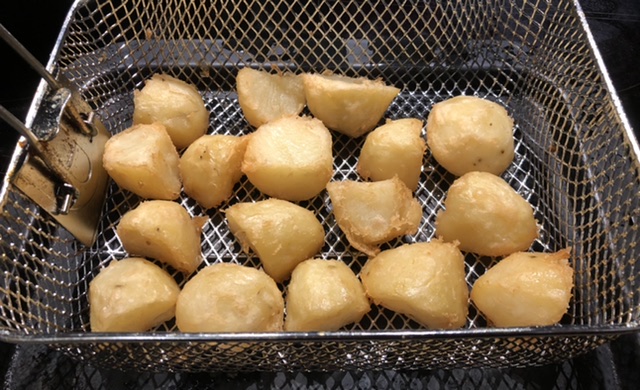 I am no expert Anna but rolling the potatoes once par boiled and shaken in a colander to break up the surface in polenta it gives a nice crunchy bite to them.
That is my limited knowledge on the subject

I am a big fan of a proper roast potato and I can do a cracker on a Sunday. My favourite roastie is one that has a flat base that becomes super crunchy and a nice light crunchy top and super fluffy inside.
I have found that a 10min par boil and then drain and dry then a good dose of salt and into the oven in goose fat for 35/40 mins and basting then every 10 mins works well and stay crisp even when covered in gravy , which is another thing that I take very serious. A bad gravy can ruin the entire dinner. .

As above or whatever your prefered technique for texture + turmeric.

Sadfield said:
As above or whatever your prefered technique for texture + turmeric.
Click to expand...

What does the turmeric add ?

Donegal john said:
What does the turmeric add ?
Click to expand...

Just adds an extra flavour, I often boil my spuds first with a teaspoonful of turmeric in the water.

Used sparingly it enhances spuds with its earthy flavour. Plus a golden hue and alleged health benefits.

Plus, everyone's got some turmeric at the back of their cupboard, just sitting there...

If I get your post correctly, you're right.
Cook them and then cook them again. I don't think it matters much about the first cooking method.
Long story short--get them tender and then hit them hard with heat. My method is to fry them hard in the second round.
The general method for fries (chips) here is to soften them up, cool them and then go in for the kill. But that's just browning the strips to golden brown.
I even did a jacket potato recipe (super-high heat and fully cooked) and cooled them overnight. When I fried them the next day, utterly amazing taste.

moto748 said:
Plus, everyone's got some turmeric at the back of their cupboard, just sitting there...
Click to expand...

Mine isn't...its used EVERY week.

Clint said:
Mine isn't...its used EVERY week.
Click to expand...

Not for tatties though I bet!

I'm a par boil and shake in the colander to fluff them up type of chap too.
But before putting them in the oven, I coat them in oil that's had a tiny pinch of mustard powder, salt and pepper, paprika and a splash of white wine vinegar mixed in.
Not enough for you to 'taste', but enough that it gives a bit of colour and additional flavour depth.

And yes, gravy makes or breaks a dinner! I can spend more time on the gravy than the meat!

turmeric is a nice gimmick for making omelets in how it brightens the color naturally.
We use it all the time for other dishes.
All this talk of potatoes makes me want to buy a very large bag.
Potatoes and corn are a weakness, can't keep them around.

If there is only one thing that is the take away from the unfortunately extensive experimentation on my children for Sunday dinner, that is to cool completely between first boil and oven. If you are being really good, chill them overnight in the fridge. Second, is the roughing of them after the boil, personally shaking them is a bit too much for me as I take them to really quite fluffy and shaking squishes the outer ones in the pan more than the rest. Tip them back and forth between colander and pan till they have reached the desired fluffiness!

Letting the spuds go stone cold is a great tip...I use that when cooking bombay potatoes.

The right type of potato (King Edwards/Maris Piper) cut to lime size as noted and with angular cuts (edges crisp better than curves).
The right type of fat - plain cheap lard pre-heated at 200C, at least deep enough to cover a pound coin in the roasting pan - this is for visualisation, don’t roast a pound coin!
Par boil the potatoes quickly until the outside of the potatoes starts to break up.
Drain and sprinkle with plain flour to coat while giving them a little shake in the pan to break up the outside a little more.
Tip them into the hot fat (tilt the roasting tin so you’re tipping the potatoes into the shallow end to avoid splash burns).
Ladle the hot fat over the potatoes
Every 15 minutes turn the potatoes and ladle the hot fat over again.
In an hour you’ll have beautiful crispy potatoes with soft fluffy insides.
Drench in salt!

Nicks90 said:
I'm a par boil and shake in the colander to fluff them up type of chap too.
But before putting them in the oven, I coat them in oil that's had a tiny pinch of mustard powder, salt and pepper, paprika and a splash of white wine vinegar mixed in.
Not enough for you to 'taste', but enough that it gives a bit of colour and additional flavour depth.

And yes, gravy makes or breaks a dinner! I can spend more time on the gravy than the meat!
Click to expand...

1 of my 4 daughters does not take any gravy on her dinner. I have asked my wife for a paternity test.

Donegal john said:
1 of my 4 daughters does not take any gravy on her dinner. I have asked my wife for a paternity test.

For the ones that don’t do gravy. A dusting with finely grated Parmesan, just before they are served, makes roasties even tastier.

If you are roasting spuds in a tin in the oven, and not deep frying them, then about 20 to 30 minutes before the end of the roasting time a gentle press with a masher makes the rounded potatoes have a greater surface area in contact with the tin, which makes them crispier.
You must log in or register to reply here.
Share:
Facebook Twitter Reddit Pinterest Tumblr WhatsApp Email Link