1st Brew yesterday afternoon, apologies if this is overly detailed.

First up I made some sanitiser put everything in and then a summoned the beer gods to bless my endevours
with a pint of a cheeky little blond callen Boon Doggle.

Filled the kettle was with about 10 (maybe 11) litres of best tapoline and crushed in half a campden tablet stirred it
and then started to heat the water.

Poured the grains into the sock provided in the kit and added it to the pot. Paused heating about 65c to
and left it to steep for 20 mins. The kit didn't say to do this it said to leave them in until 76c but I've read something about tannins
and it was slightly old malt so I didn't want to chance it. 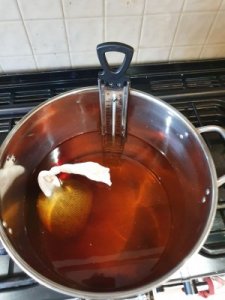 At the end of the time I lifted it out and let it drain without molestation and popped it to one side. 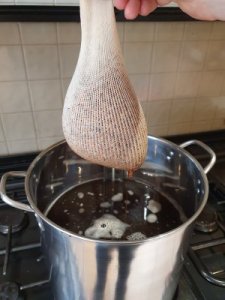 Brought the pot up to the boil and put the liquid malt container in a washing up bowl of warm water to loosen it up while I waited.

Once it started to boil I took it off the heat and stirred in the malt. Then Back on the heat
and I brought it back to the boil and added the hops and set the timer. 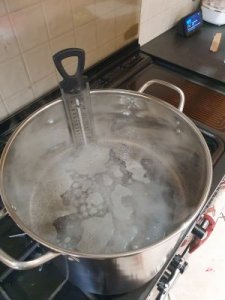 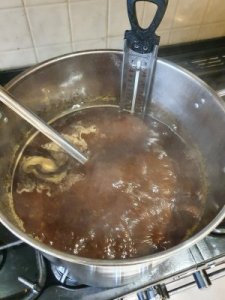 About 20 mins before the end I put another 9 litres of water in the clean fermenting bucket
and stirred in half a campden tablet and for want of a cooler filled the bath with 4 inches
or so of cold water.

At the end of the boil I took the pot with the lid on and added a couple more inches of cold water to the bath and
swirled it round the outside of the pot for 10 mins or so until the temp dropped to 100f.

Once it was cooled to about 35c I took it down stairs and gently poured it into the fermenting bucket and topped it up to 19 litres total with another litre and a bit.

At this point I took a Hydrometer reading of around 1.042-5 ish (first time using one).

6g of muntons ale years was sprinkled on top and I moved the fermenting bucket to the cupboard under the stairs which should remain relatively undisturbed. Looking in on it today and there are bubbles clinging to the side of the airlock and slightly malty odour so presumably its working but it sit tight for the time being.

Really enjoyed it, Planning the next one already. 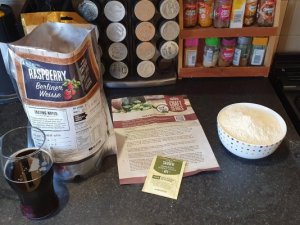 Started this off on Friday night with a pint of Purple Panther Porter.

Started boiling about 17 litres of water which in hindsight was became a pain in the ass later and sterilised my bucket, some scissors and the big spoon. Weighed out 600g of Brew enhancer and opened the packet to fish out the yeast pack and instructions.

Realised I only needed 3 litres of water boiled, but figured I'd use the rest anyway so let it all come to the boil. Once boiled I poured 4-5 litres into the FV and added the raspberry beer goop and then stirred in the brew enhancer. 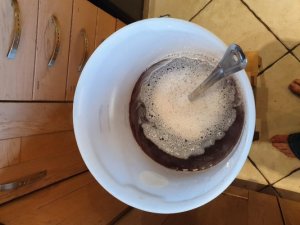 Topped it off with the remainder of the boiled water which in hindsight was a mistake as it took forever to cool down and then made it up to 23l with cold tap water and transferred to a bathtub of cold water after taking a Hydrometer reading 1.036 once it had cooled down a bit. 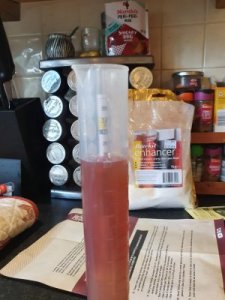 4 hours later it was still too hot to pitch so I moved it to my fermenting cupboard and left it to cool down overnight with fv lid firmly on. This morning and it was 24° c, so I carefully opened up the FV and pitched the yeast.

This was my 2nd Mangrove Jack kit and having bottled the first one this morning I've got straight on with another.

Boiled 3 litres of water and warmed up the Sachet, before stirring in the goop and added brew enhancer. Topped up to 18 litres and stirred it up before Pitching the yeast at 30° c.

I've stuck it in the Airing cupboard as the range is a bit higher then my usual spot.

Just catching my brews up.

Batch was about 13l and came out at 4.99%. Nice Brew, lost the citra aroma towards the end of the keg but kept citrusy flavour

My first foray into BIAB allgrain was a bit striaght forward, For my second I wanted a "bigger" beer so I bastardised this using Leffe as a basis.

Krausen forming around 15 hours after pitching.

After 5 Days tested gravity as fermentation had stopped, it smelt foul. Gravity was 1.011 on Day 5 from around 1.068.

it had cleared up and F.G. was down to 1.006 pitched in the dry hops and I will give it 4 more days days and cold crash for for 48 hours days with gelatine before kegging next weekend. I think this one will benefit from a week or two in the keg before I try it.
Last edited: Oct 11, 2020

This was my third all grain attempt.

The first part of the mash went well, but during the sparge I ended up with then manifold pipe breaking away and blocking the tap. I was able to get it going again but I think that brought my efficiency down.

All in all though I got 22 litres or so of 1.065 gravity wort and its fermenting away nicely next to the Hefe.

My third Brew of the Week.

Pretty stoked with how this one went. After coming up short on Tuesday I spent an hour checking measurements on the kettle and Fermenters and realised how far out my kettle scale is so I got my volume correct and was able to draw off 23 litres of wort and probably left 2-3 litres of trub/wort mix in the bottom of the kettle.

It was my 2nd time using the mash tun and it worked well.