I did this yesterday and posted it onto my facebook page to illustrate to some of my friends the effects of what is coming. I took our usage for December and January (taken via an API out of my smart meter which I had installed a few months ago) and plotted it against the charges as they would have been with our old fix, as it would have been with the fix we thought we had, as it is on the price cap and what it would have been if we were paying the rates from April.

Whenever I look into it, our household falls into the 'lower use than average' category. We cook and heat using gas, with an older boiler and a hot water tank. I set the house thermostat pretty low and expect everyone to wear jumpers, always have.

In June last year our fix (with So Energy) came to an end, and we moved to Pure Planet. From what I knew about the energy market and prices, I already knew at this point we'd end up paying more than we had before.

Then in October Pure Planet (like 30 or so other suppliers in 2021) went bust, so we got moved to Shell Energy and our prices were set to the price cap.

(It's really a rate cap, not a price cap, but that's a debate for another day. Also worth noting what you pay on the price cap varies depending on where you live)

The table is not entirely fun reading, and if you're currently still on a fix you're likely to have a helluva surprise when you come off it.

The standing charge alone will nearly double to what we were paying in 2020/2021, and I don't know which percentage to give as a final figure to think about. We paid around 17% more on the price cap than we would have expected to on the fix we had before Pure Planet went bust, but if it was on the April rates we would have paid over 80% more.

Like others here, this will be painful but I can economise and if anything it just means less will go to savings each month, but there will be others out there in work who this will hit really really really hard.

Our household income is a bit uneven, I earn OK money, my wife working as a teaching assistant not so much. If it wasn't for my wage this would be exceptionally painful. Add on to that that I'm quite militant over our energy use already which helps, for others who aren't used to keeping an eye on this things really will know about it once the bills start landing.

edit: I forgot my final thought which was one of the other things I came on here to post. For those who will really struggle, who may even struggle to afford to cook with these prices, £200 is nothing when you consider them below, and that it's just two months of what has been (in the south west at least) quite a mild winter so far. Then on top of that it assumes energy prices will fall enough to make the higher bills palatable when we have to pay back £40 a year for five years.

On top of this, I already pay lower rates as I pay by direct debit. Those on prepayment meters, sometimes through no fault of their own, pay more than the rates below, so are hit even more. 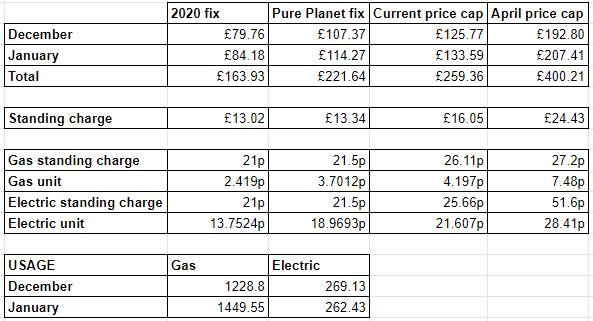 Looks like several europiean countries are looking after thier people a lot bettter than our bloody government are.

As UK households feel pressure, how are other European countries tackling energy crisis? | Cost of living crisis | The Guardian

and lets not tell the wife please

I do not read papers as so many are full of mistruths. They are in the business of selling papers.

Calls for windfall tax grow as BP's profits surge
Oil giant BP has reported its highest profit for eight years, prompting calls for a windfall tax on energy companies.
BP posted a profit of $12.8bn (£9.5bn) for 2021, and it made more than $4bn in the final quarter of the year when oil and gas prices surged.
The jump in energy prices means households are facing huge increases in gas and electricity bills from April.
Labour said it was "only fair and right" that energy firms making higher profits should pay more tax.
Last week, rival oil giant Shell also reported bumper profits of $19bn on the same day that the energy regulator announced UK householders would see a 54% rise in their domestic energy bills in April.
Commentators say energy firms are raking in excess profits on the back of fuel poverty and "creeping climate apocalypse".
However, firms like BP argue they are facing an unprecedented challenge: while the global economy remains heavily dependent on fossil fuels, they are being urged to shift to lower carbon alternatives, and need to big profits to fund that transition.

What is a windfall tax and how would it work?
A windfall tax is a one-off tax imposed by a government on a company or group of companies.
The idea is to target firms that were lucky enough to benefit from something they were not responsible for - in other words, a windfall.
An example of such a windfall would be high energy prices. Companies that get oil and gas out of the ground are getting much more money for it than they were last year, largely because there has been so much more demand as the world emerges from the pandemic.
Read more about windfall taxes here

One thing I don't get.

Over the last few years each company that provided my electric said my electricity came from green energy and gave me a percentage of each type. How are these companies affected by fossil fuel price increases?

Noting Nuclear is classed as green as carbon neutral but yes I agree,if it is green only then why does gas affect price, there it is they are lying, smoke and mirrors

There is no doubt that energy transition is costing and going to cost oil companies a lot in the medium term, it has to be financed from profits and prices make profits, I do not like it but society demands it so it is being done , I do not imagine anyone thought it would be cheap or maybe society did not think, to complain about it is a bit have your cake and eat it idealism. Ours is the time of change

Justin Dean said:
Noting Nuclear is classed as green as carbon neutral but yes I agree,if it is green only then why does gas affect price, there it is they are lying, smoke and mirrors
Click to expand...

I can only guess that they are importing the green energy.

The explains bits of it

Why is there an energy crisis in Europe?

A look at why gas and electricity bills are going up in some parts of Europe.

Over the last few years each company that provided my electric said my electricity came from green energy and gave me a percentage of each type. How are these companies affected by fossil fuel price increases?
Click to expand...

They were lying to you.

Expected rise in household gas and electricity bills by £200

Cost of living: Labour to call vote on windfall tax for oil and gas companies