Rowan Berries for Bittering - How?

On my Kindle I have a book called "Brew It Yourself" and within it is a section about berries, one of which is:

"ROWAN BERRIES - The fruit of the mountain ash grows with wild plentitude. It's a bitter fruit that can be used in beers and infusions."

I have ...
My plan is to let the lad brew his own beer in a couple of DJ's and rather than use my Hops I thought that I would use the opportunity to substitute them with Rowan Berries.

The question is "How do I use the Rowan Berries for bittering?"

Any suggestions (before Thursday morning please) are welcome.

Rowan berries? Can't say I've considered them as particularly bitter. Well no harm in trying. I'd do what a lot of "historic beer" brewers do (like making "Fraoch", "Ebulum", or the like) and just replace some of the bittering with hop alternatives. I.e. don't throw all the hops out of the recipe.

My mates' grandson decided that he didn't want to know how to brew beer (I hope he lives long enough to regret that decision) so I went out to the front garden and sampled a berry! It was Bitter with a capital "B"!

I picked 500ml of the berries, washed them, stuck them in a pan with 1 litre of water, brought them to the boil and simmered for about 10 minutes. 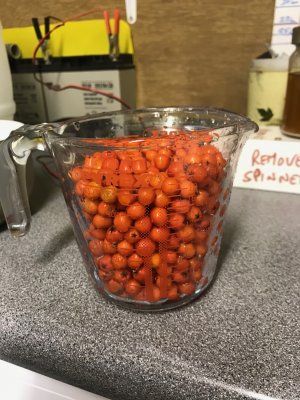 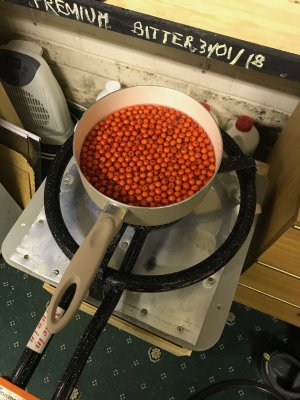 After 10 minutes, the berries were really soft so I mashed them up with a spoon and poured off the liquor and the berries into the cafeteria that I use to make Hop Tea. The result was 800ml of a crystal clear pink coloured liquid.

It looked so nice that I tasted it!

Yep! "Bitter as a witch's tit." sprang to mind and definitely bitter enough to use in a brew; so that's what I did in two DJ's.

I kept the recipe as simple as possible as follows: 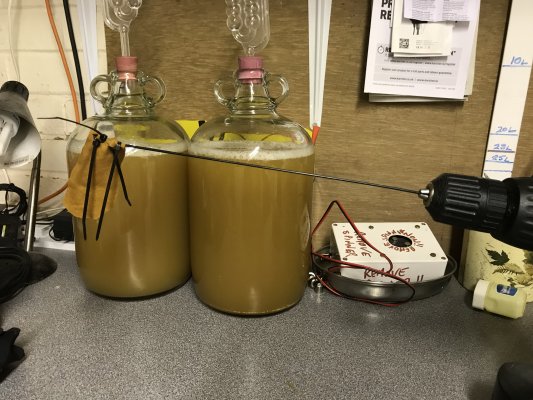 I differed the Rowan Berry Extract so that I would notice any difference in the bittering between the two brews.

BTW
I had to clean out the DJ's before I used them so I thought I would include the modified bottle and DJ cleaner in the photograph. It's a great improvement over the first one where I used a copper tube! 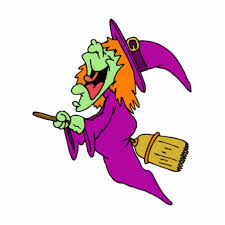 I was a bit concerned as I thought Rowan berries were poisonous, they are mildly but cooking denatures the poison. Interesting experiment, Much flavour past the bitterness?

Zephyr259 said:
I was a bit concerned as I thought Rowan berries were poisonous, they are mildly but cooking denatures the poison. Interesting experiment, Much flavour past the bitterness?
Click to expand...

Thanks for that! Especially as the first one I tasted was eaten raw!

There is loads of flavour past the bitterness but it's hard to describe. The extract was crystal clear and looked for all the world like a rosé wine; so my brain was expecting that when it hit my tongue.

I'm afraid that the bitterness got there first, but I rolled it round my mouth and got a distinct "rose" flavour/aroma before spitting it into the sink. However, how much of that flavour was because of the way it looked, I really don't know!

I also gave the OG sample a quick sip as well but by that time the LME was overpowering the Rowan Berry extract so it tasted very similar to a strongly hopped wort.

I'm really looking forward to tasting it in another couple of weeks before I bottle it.

It was something I remember being told as a kid so check online.

Parasorbic acid is toxic and causes indigestion and nausea, however cooking and exposure to moisture convert it to the benign food preservative sorbic acid.

Which raises an interesting thought, potassium sorbate is wine stabiliser, and would be the potassium salt of sorbic acid so you may not be and to ferment this depending on concentration.

Which raises an interesting thought, potassium sorbate is wine stabiliser, and would be the potassium salt of sorbic acid so you may not be and to ferment this depending on concentration.
Click to expand...

I just went out to the garage to check the DJ's and they were glubbing away merrily.

So merrily, that I whipped out the "S" shaped air-locks and installed a joint Blow-Off system whereby the tubes from the two DJ's both go to a 5 litre bowl with 25mm of water/bleach mixture in the bottom to give a seal.

I didn't take the camera with me but I'll Post a photograph tomorrow; even if the DJ's have overflowed!

Here's a photo from this morning. The garage temperature has dropped to 18*C so the brew has calmed down a bit and it looks like I avoided the need for a Blow-Off system; which makes a pleasant change from wort all over the floor! 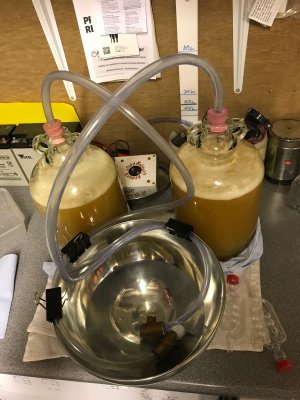 However, when the temperature comes up during the day ...... ?
C

Old thread I know, but was there any follow up as to how this beer was?