Not looking good, i doubt Putin will care much about the "heavy package of economic sanctions" he hasn't put 100,000 troops near the border as a bit of a wind up.

During the talks, Mr Johnson called for allies to have a "heavy package of economic sanctions ready to go" should Russia make the "devastating and destructive decision" to invade Ukraine,
Click to expand...

British nationals in Ukraine should leave the country now - while commercial means are available, the Foreign Office has said.
Earlier, President Joe Biden told US citizens to leave and the US has warned that Russia could invade "any day now".
Russia has repeatedly denied any plans to invade Ukraine despite massing more than 100,000 troops near the border.
The announcement came after Boris Johnson told world leaders, in a call, he feared for the security of Europe.
During the talks, Mr Johnson called for allies to have a "heavy package of economic sanctions ready to go" should Russia make the "devastating and destructive decision" to invade Ukraine, Downing Street said.
The leaders agreed that if Russian President Vladimir Putin de-escalated "there was another way forward" and they pledged to redouble diplomatic efforts in the coming days.

The Foreign Office, which also now advises against all travel to Ukraine, estimates there are a few thousand British nationals in Ukraine.
It said that, due to this increased threat, further embassy staff would be withdrawn from Kyiv - the embassy will remain open but be unable to provide in-person consular assistance to any Britons who remain.
A UK government source said the safety of Britons was the "number one priority" and said the decision was "the right precaution to take".
Several other countries have also advised their nationals to leave the country, including the Netherlands, Japan and South Korea.
US national security adviser Jake Sullivan said Russia was in the position "to be able to mount a major military operation in Ukraine any day now" and warned that there continued to be signs of Russian escalation including new forces arriving at the Ukrainian border.
US Secretary of State Antony Blinken said on Friday that "an invasion could begin at any time, and to be clear, that includes during the Olympics". The Winter Olympics in China are scheduled to end on 20 February.

The current tensions come eight years after Russia annexed Ukraine's southern Crimea peninsula. Since then, Ukraine's military has been locked in a war with Russian-backed rebels in eastern areas near Russia's borders.
Earlier on Friday, Defence Secretary Ben Wallace met his Russian counterpart Sergei Shogiu and said at a news conference afterwards that an invasion of Ukraine would have "tragic consequences" for both countries.
Mr Wallace said Russian forces were in the position to invade "at any time" but said Mr Shogiu had given him security assurances.
Mr Shogiu said Russia's ties with the UK were "close to zero". But when asked about the state of UK-Russia relations, Mr Wallace said they were "a lot better than 0%" after Friday's talks.
Security concerns have grown in recent days after Russia started huge military drills with neighbouring Belarus and was accused of blocking Ukraine's access to the sea. 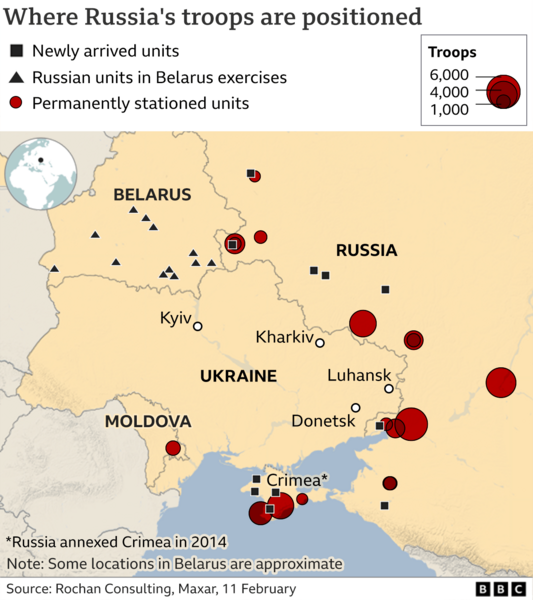 Ukraine's foreign minister has hit out at French President Emmanuel Macron after he said it was vital that Russia was not humiliated over its invasion.

Mr Macron said it was crucial President Vladimir Putin had a way out of what he called a "fundamental error".

But Dmytro Kuleba said allies should "better focus on how to put Russia in its place" as it "humiliates itself".

Kuleba also said "calls to avoid humiliation of Russia can only humiliate France and every other country that would call for it".

What a knob that Macron is!

Macron is right in the sense that backing an enemy into a corner is a bad strategy.

Scrattajack said:
Macron is right in the sense that backing an enemy into a corner is a bad strategy.
Click to expand...

As much as it stinks Macron is right Putin needs a way out so he can say he achieved his goal its the only way this will end.

Russia seem to have the momentum at the minute.

A lot of talk of Ukraine having a large counter offensive later this summer / autumn?

I think Macron is being a lit like Chamberlain here, but I do not think it will work.