Well here it is, the review thread for the 2020 Secret Santa swap which will hopefully end this year on something of a much needed positive note.

Hopefully your beer came with a label of some sort indicating a name so that the sender can identify it, and include a photo with your review if possible. Please remember to keep your comments and feedback as constructive as possible

If you recognise your beer from a review then feel free to reveal yourself, however if you've sent two of the same beer to two different people then wait for both reviews to be posted so as not to give the game away early.

I think that's about it, we're officially open for business so try to drink the beer and post the review by 31st at the latest and thanks again to all who got involved this year

Edit to add: The full list of swaps will be posted after all the reviews are in, so there's no hiding

Mine are in the fridge for later! Someone sent me a cider as a bonus brew which was very kind, cider is not my favourite but be assured I will try to get it down!

Thanks Steve. I’ll kick this off.

This was pretty dark for a lager but it had a dose of Vienna malt so I assume it’s actually a Vienna lager. Bottled off the keg so I didn’t want it hanging around too long and treated myself to this on Saturday 19th December. Santa thought there might be a carbonation issue due to bottling from the keg and the fact he/she tends to under carb anyway but it was actually perfectly fine for my taste. It poured with a very nice head actually as can be seen from the photo. Lovely malty aroma and nice Vienna sweetness but not overly sweet. This was a very nice beer and didn’t last long as I found myself picking the glass up for another sip almost as soon as I’d put it down again. Helped get me through the Mrs and Daughter watching the Strictly final whilst I was waiting for MOTD start. Thanks Santa. 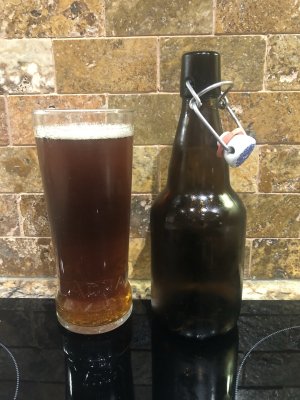 Mine are in the fridge, think they will be consumed today. One is a mystery beer - no description so may try that first.

There have been a lot of double swaps so there's a chance someone else got the same beer as you, so probably best not in case you spoil the surprise. Unless of course it's a complete stab in the dark guess, rather than an educated guess.

I just suddenly remembered that it was Christmas Eve and I was allowed to drink my beer.

I think I have the same beer as @strange-steve so I think this particular Santa will be more interested in his review. I'm not one of these people who can guess the entire grain bill and hop schedule, just from drinking the stuff. However, Santa included a detailed label:

A deep mahogany winter warmer, rich with chocolate and crystal malts. Bittered with Norther Brewer and Styrian Goldings, then finished with Hersbrucker hops for a toasty roasty Christmas brew
Click to expand...

So yeah, what he said. Thankfully not pigeon-holed into a particular style, so I won't be influenced by what I ought to be tasting.

Chilled to 9 degrees, the cap popped with a nice hiss. Poured really well and built up a nice pleasant head, with a wisp of yeast making it into the glass at the end and all the nasty grubby stuff remaining. Straight away, I could smell the chocolate although it has died down a little bit.

Taste wise, I'm really impressed and think this is a cleverly balanced beer. There's a good, strong, up-front bitterness at first which goes well with the initial full, rich flavour, but it then fades to what is a surprisingly light beer with a hint of sweetness behind it. Quite full in the mouth and I think the carbonation is spot on - a nice sparkle on the tongue just to lift the beer but not overly fizzy. A good lingering finish too. As for being 7.2%, the strength is well hidden but there's a definite warmth in the background.

Thank you Santa - a big fan of this one!

Perhaps if you think a beer has been brewed by a particular person, just PM them. Might be fun to see those guesses afterwards!

Opened with a nice hiss and poured well with a lovely head.
lovely chestnut colour (photo makes it look darker than it was) and pleasing malty aroma. A surprisingly light body with a subtle balance of hops and malts. Good carbonation and a very drinkable ale.
Really nice 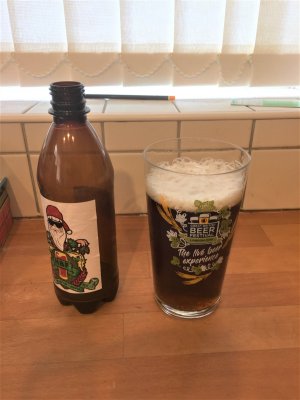 Drank both my beers earlier

First was this. No description but making a guess I would say a kit lager. Thank you Santa.

First was this. No description but making a guess I would say a kit lager. Thank you Santa.
Click to expand...

What was the second?

Thank was quickly followed by a best bitter, version 7. Lovely mid day drop. Someone must like making bitters. If you are making version 8 you may need to drop the carb slightly.

RichardM said:
What was the second?
Click to expand...

See next post. Realised the pictures go at the end of the post so thought I would do 2 posts.

Cracked open my first while listening to radio 4's `9 lessons and carols'. Great way to start off Christmas.
No info with it except some writing on the bottle which I think says `Dunkelweizen 03 Dec '20'.
I was worried when I got it in the post that it wouldn't have had time to carb up if that was the bottling date so I put it in the airing cupboard for a week, followed by my beer store which hovers around 12c at this time of year.
Have to confess I've never had a German beer ever before. So I have no idea how good this is compared to commercial versions but very quaffable it certainly is.
Nice amount of fizz, good head that stayed to the end (though that wasn't very long), rich malty flavour, slightly fruity, no real bitterness compared to what I normally drink. Slightly hazy, but it's a wheat beer right? I'm guessing it's about 6% ABV or thereabouts.
Well done whoever brewed this - I'd happily drink several of this one. 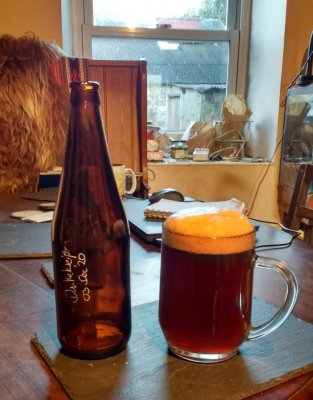 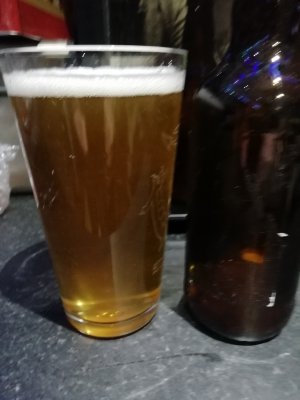 First of my secret Santa..a "teddog" IPA.
Bottle opened with a nice hiss...beer pours with a nice head. It's got chill haze from my freezing brew shed..
Aroma is what I like..lovely hoppy tropical. It's really crisp with a firm bitterness,full on hops!! It actually tastes quite familiar to a commercial beer I've drank loads of! In fact it's very close to Punk IPA!Yes, definitely!! To me anyway...
Whatever it is it's a well made beer,right up my street...
Excellent kick off for the proceedings!
Thank you very much..

Pouring my first secret santa swap, I can see a lovely rich brown looking beer, sniff test provides a good malt aroma and slight yeasty hint but only very slight.
The Dunkel's maltiness is very prominent, also possibly some chocolate amongst the sweet malt flavour.
Carbonation is very good, giving a fizzy hit on the tongue, you can clearly hear the fizz on uncapping, The head was present when poured, but only lasted about 10-15 seconds, but It doesn't affect the enjoyability. 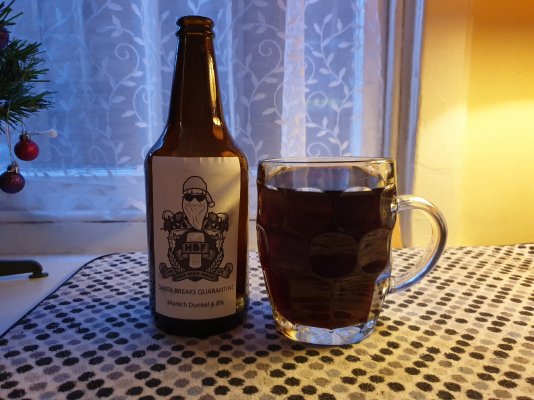 It's a medium bodied beer, no off flavours at all, an easy drinker and a very tasty beer!

Thank you to the sender/brewer, a good way to start xmas eve.

I am enjoying my 11% quad I was kindly gifted, the fire is roaring, dinner is in the background, this definitely has the ambiance going for it!
Its a very deep brown colour pours with little head and mostly clear. Aroma of very rich dark malts, brown sugar, dates, alcohol and a bit of a earthiness.
Taste very similar to the aroma. Super flavourful, rich, sweet and coating that lasts a long time. Rich malty and a hint of fruit, sherry like if anything. There is a plenty of alcohol but it's not overdone. At the end there is a bit of the earthiness in the flavour I got in the aroma, I cant decide if it's a yeast driven thing or from the hops, but it adds a nice complexity to the beer. Bitterness is lower but still balances although I would not say it is bitter, just mellow. I wish it had a bit more carbonation, although that would make it easier to drink which at 11% this should be savoured as a sipper. It's definitely getting better as it warms up.
Thanks for sending this secret santa! 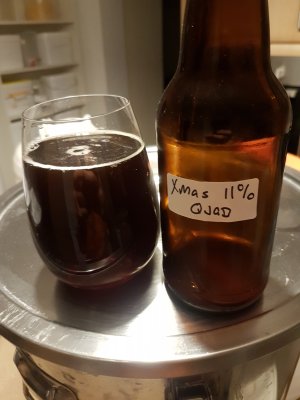 My first is a very nice 5% chocolate stout.
Aroma is an inviting rich chocolate and coffee.
Flavour has more caramel and vanilla.
Clean, smooth and quite full bodied but nicely balanced by the bitterness.
Well brewed santa and thank you

my only criticism would be its a bit undercarbed.
Merry Xmas All 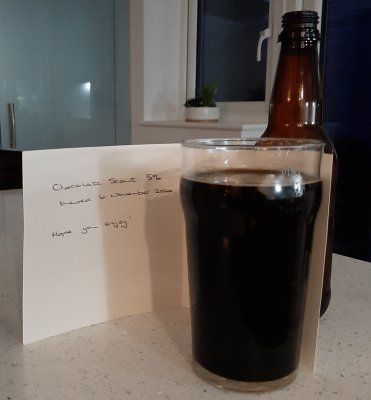