Its another day of heavy rain and wind today looking forward to the summer months.


Storm Franklin is forecast to hit the UK after Storm Eunice left 1.4 million homes without power.
The Met Office has issued an amber wind warning for Northern Ireland for Monday morning and yellow ones for parts of the UK from Sunday.
This comes days after one of the worst storms in the UK in decades in which three people died.
On Friday a record number of homes were thought to have been without power, said the Energy Networks Association.
And 83,000 homes still have no power, it said.
This includes around 29,000 in South West England, 23,000 in South East England, 20,000 in South England, 7,000 in Eastern England and around 3,000 in South Wales, it said.
Storm Franklin's high winds could cause further power cuts, transport delays and damage to properties, the Met Office has warned.
Franklin is the third storm to hit the UK in a week, and follows the disruption from Storm Dudley and Storm Eunice.
The amber warning for wind in Northern Ireland runs from midnight until 07:00 GMT on Monday.
There are milder yellow warnings for wind in Wales, Northern Ireland, the south-west of Scotland and most of England starting from midday on Sunday and continuing into Monday.
A yellow warning for rain, meaning "there is a chance that homes and businesses could be flooded", is in place in the northwest of England until 18:00 GMT on Sunday.
The focus of the yellow rain warning is around Greater Manchester and extends to Blackburn with Darwen, Cheshire, Cumbria, Lancashire, Merseyside and Warrington.
The same warning in also applies in Derbyshire, Durham, Northumberland and Staffordshire in the West Midlands.
Natural Resources Wales (NRW) said flooding was expected in several areas along the River Severn in Powys.
Meanwhile energy companies are still working to restore power to thousands of homes.
Electricity provider Western Power Distribution (WPD) said the outage was the most widespread recorded for the south west of England.
On Friday Storm Eunice tore through the UK on Friday bringing widespread disruption as trees were toppled, trains were cancelled, schools closed as well as power supplies being affected.
A female passenger in her 30s died in Highgate, north London after a tree fell on a car. The driver, a man in his 30s, was taken to hospital.
A man died in Merseyside after debris hit the windscreen of a car he was a passenger in.
In Alton, Hampshire, two men were in a pickup truck when it was crushed by a falling tree. The passenger died at the scene while the driver was taken to hospital with serious injuries.

Meteorologist Becky Mitchell said this was the first time the Met Office had recorded three major storms in a week since the naming system was introduced seven years ago.
She told the PA news agency: "At the moment we've got a really active jet stream, which is why we're seeing so many storms track right towards the UK.
"We had Dudley on Wednesday, Eunice on Friday and Franklin today."

Storm Franklin is the third named storm in a week to hit the UK - following Dudley and Eunice.
www.bbc.co.uk 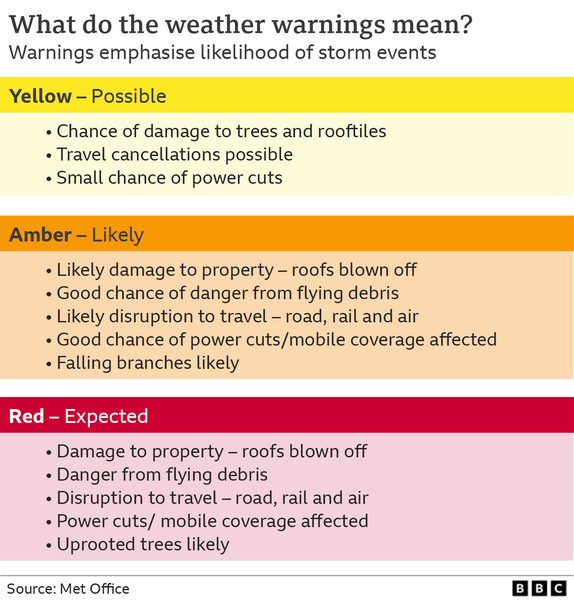 Hope this is the last for a while, fed up of having to lash things down and go out chasing bins etc