Hi everyone, I've just started a batch of Barley Wine (from a kit) and followed the instructions to the letter, the brew started well but only lasted a day before it slowed down to a stop, the temperature is 20°C ive been told I have what is known as a "stuck fermentation", I've broached this subject before but never asked how to re-start so if someone could give me the best way to get this going again, thanks in advance and happy brewing, regards Dave

The only way to know for sure is to take gravity readings. It doesn't have to be bubbling like crazy to be fermenting.

one day is not a stuck fermentation, yeast has multiple phases firstly it sucks up all nutrients then goes into exponential growth then it will work on consuming sugar. I would wait a little longer. as already said you can take readings. I recommend a tilt to get it online without wasting beer sampling. You said its a Barleywine did you use yeast for high gravity beer?
R

Hi. This looks like a relatively recent thread on stuck fermentation, which I believe is my problem. See below SG and temperature readings from an iSpindel since pitching the yeast.
The temperature does vary quite a lot as I'm brewing in a conservatory which is at night heated by a convection heater on low. I know this isn't an ideal setup but it's not given me any fermentation problems before now.
The only thing I've don't differently is to pitch half a pack (so 5.5g) of Safale US-05 sprinkled on top as I was hoping to spread the pack across two brews. Given that one pack out to be enough for a 23 litre batch I'd have thought that half a pack would be more than enough for my 5 litre batch.
Do you guys think that my levelling off of SG readings could be caused by underpitching or by the temperature excursion below 18 deg C?
Any ideas on the best way of fixing this?
The fermentation clearly started and there's a good krausen on top so for now I've just given the bucket a vigorous swirl.
Thanks. 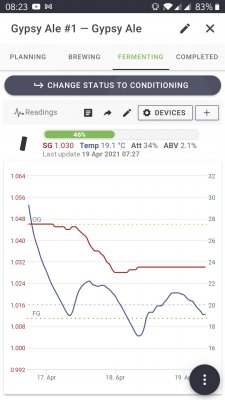 If the iSpindle is correct, I am afraid the beer was underpitched (short by at least another full packet) and the wort was too warm when you added the yeast. Dropping the temperature that fast in early fermentation will cause many strains of yeast to stop or slow down.

You could try and make a 1 L starter with the remains of your packet of yeast and pitch that after it has had 24hrs to replicate, that might help convert the remaining sugars.
R

Thanks for your quick reply.
To be honest, the temperature of the wort when pitching the yeast was nowhere near that high. I measured it at 26 deg C with a spirit thermometer.
I'm not doubting your knowledge or experience but one and a half packets of dry yeast for a 5 litre batch? Really? I thought one of those packs was good for a five gallon ferment!
Is it not simply the case that for a quarter of the batch size you can use a quarter of the yeast or does there need to be a "critical mass" regardless of the batch size?

What's the best thing to use for a starter solution? Would a simple table sugar solution made up to the same OG work? I don't have anything else to hand.

Whilst I have the lid off I'll also check the SG with a refractometer as well.

Thanks for your help.

Ahh, missed that bit about a 5L brew, sorry. It could still be underpitched if the yeast packet was a duff one, so if the iSpindle is reading correctly then either the beer needs krausening to get it going again or there was another mistake elsewhere in the process.

I don't have an iSpindle so no idea how reliable they are, but check with a hydrometer if you have one. I wouldn't krausen with anything other than wort/DME.

Just FYI - there has been debate about how many viable cells there are per gram in dry yeast packets.

Some of the estimates are 5-20 billion per gram, Safale say there are only 6 billion. Taken with Wyeast's pitching rates for a true Barley wine (at >1.080), that would suggest 3g yeast/L or 15 g for your brew. If your wort was lower in gravity as the iSpindle seems to suggest (and not a Barley wine!), then maybe half a packet would be OK.
R

Rochefort said:
Just FYI - there has been debate about how many viable cells there are per gram in dry yeast packets.

Some of the estimates are 5-20 billion per gram, Safale say there are only 6 billion. Taken with Wyeast's pitching rates for a true Barley wine (at >1.080), that would suggest 3g yeast/L or 15 g for your brew. If your wort was lower in gravity as the iSpindle seems to suggest (and not a Barley wine!), then maybe half a packet would be OK.
Click to expand...

Yes I've researched this a bit and still much for me to learn, but that's all part of the joy huh?

I'm not the original barley wine poster. I've jumped on this thread as it was a recent one. My brew is an American Pale Ale with an OG of 1.045 and an intended ABV of 4.5. I managed an OG of 1.046 measured with refractometer.

The Fermentis technical data sheet for US-05 suggests a dosage of 50-80g/hectolitre (obviously aimed at commercial brewers!) so 5.5g should easily cover this for 5 litres. Anyhow experience counts for a lot I guess and all has not gone to plan!

I'll see if I can get hold of some DME and re-krausen the beer as you suggest.