Afternoon all... my first attempt at a brew day write-up after I spent Sunday knocking up a West Coast IPA.

Grain Bill:
Hops:
First time that I've layered hop additions at 10 and 5 minutes (normally I just do one at 10minutes) so will be interested to see if it make any noticeable difference to the final beer. Will also be dry hopping with another 50g of Centennial, 50g of Simcoe and 25g of Nelson Sauvin.

After a quick spin on the bike in the early morning sunshine and then it was time to get brewing. Unfortunately, with all the wet weather we've had recently the garage has become a bit damp recently so the day started with giving everything a pretty deep clean to make sure there was nothing nasty that was going to cause any problems but a little later than planned everything was ready to go:

One new addition to the brew house:

False bottom for the GrainFather so that I no longer have to use the hop spider as I was convinced it was having a pretty significant impact on hop utilisation but whenever I had tried to run without it pumping out was painfully slow.

Mash and sparge water was measured out and whilst it was heating up to strike temperature I did a check on the alkalinity and calcium content and then added acid/salts to target a mash pH of 5.5, 300ppm of sulphate and 100ppm of chloride. Also added half a crushed campden tablet.

Once it had reached 67degC, it was time to mash in, begin the recirculation and leave it for 60 minutes at 65degC:

A quick check on the pH after 15 minutes indicated everything was about where it should be (albeit tested with a not entirely easy to read pH strip, Santa has bought me a digital pH meter but I've not got round to calibrating it yet).

Once 60 minutes were up, temperature was raised to 75degC for the 10 minute mash out. Then it was on to sparging:

With sparing complete and the wort brought to the boil it was time for the first hop addition:

More hop additions at 10 minutes and 5 minutes then it was time to cool down to 75degC (took roughly 4 minutes) and add the hop stand addition:

After 30 minutes, the wort was transferred to the fermenter via the counterflow chiller at 17degC and aerated with the aeration paddle:

At this point I measured the OG (1.053) and realised I had made a bit of an error with my recipe... I had been targeting 1.057 and was surprised to be so far off as I'm never normally more than 0.001 away. A quick check of the recipe on the Grainfather app highlighted the issue, I had accidentally calculated the recipe with an efficiency of 86% instead of the normal 80%.

Worried that the 59IBUs of hops would be a bit out of balance with the lower OG, I quickly boiled up 250g of corn sugar in some water and added that to the fermenter once it had cooled, which bought the OG back to the target of 1.057. All of that suggests I should probably start measuring the pre-boil OG to help spot any such issues before adding the hops.

Finally, yeast was pitched and it was time to clean up with a pint of my previous brew (a Golden Ale):

A great illustrated write up - interesting to see with the grainfather, I hadn’t realised it didn’t have a false bottom plate as standard!

DocAnna said:
A great illustrated write up - interesting to see with the grainfather, I hadn’t realised it didn’t have a false bottom plate as standard!
Click to expand...

Not sure what it is like on the newer Grainfathers but on the G30 it is like the photo below. Unfortunately, the filter doesn't quite sit high enough to stop it getting clogged up with hop debris when you are doing anything with a sizeable amount of hops. Admittedly I've only tried with pellets so it may be a bit better with whole leaf. 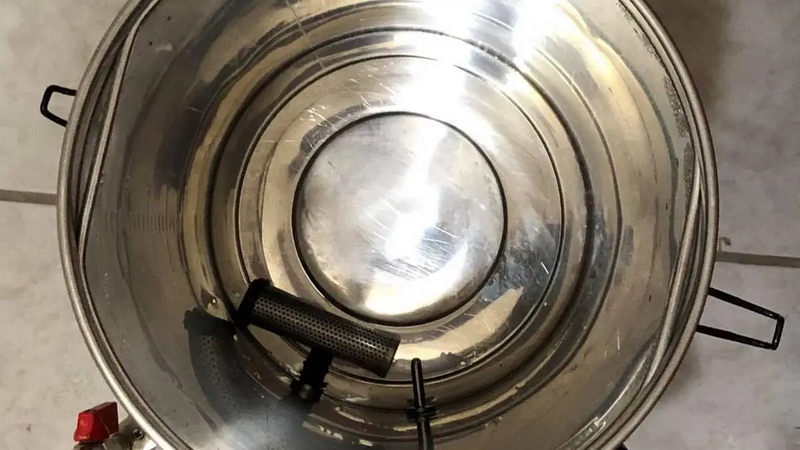 Transferred the West Coast IPA to a keg today.

First time I've successfully managed to pressure transfer without hops blocking the outlet of the fermenter. The longer Grainfather outlet definitely seems to have done the trick there.

Had a couple of samples and it tastes very grapefruity with pine and resin backing it up. Maybe a tiny bit more bitter than I'd have liked but that may smooth out with some time. Overall, seems to be coming out pretty well.

Now to wait impatiently for it to carb up...

Today I'll be brewing a Cream Ale for the forum bottle swap. Benefits of working from home mean I've used my lunch break to get everything set up as well as collect and treat my water. When I pop downstairs for a cuppa later I'll getting everything warming up ready for when I log off this evening. Will endeavour to post a few updates as things progress.

Mashed in with 4.1kg of Pilsner malt.

15 minutes in, mash pH is bang on so time to sit back and relax.

Sparge done and now onto the boil. Took quite a while to get going this evening as it's so cold but bodes well for cooling later - every cloud!

OG measured at 1.045 so I was slightly under on my usual efficiency at 74% (I usually hit 80%), not sure whether that's a characteristic of the pilsner malt or some other oddity. Shouldn't make a massive difference to the final beer though.

Yeast now pitched at 15degC, will leave it there for a couple of days and then raise to 18degC.

Quick write-up from yesterday's brew of a Belgian Blonde Ale, well, I say yesterday but I actually kicked off on Saturday evening by getting everything ready along with collecting and treating the water. It meant I had time on Sunday morning to pop out for a couple of hours on the bike to enjoy the sunshine and the come back to jump straight in to brewing. Think I'll probably try breaking the brew days up like this again in the future.

The rest of the brew day itself was fairly straight-forward; mashed 3kg Dingemans Pilsen, 2.25kg Maris Otter and 250g Dingemans Caravienne at 65degC for an hour followed by a 10 minute mash out. Then onto an hour-long boil with hop additions at 60mins (20g Northern Brewer), 10mins (10g Styrian Goldings) and 0mins (20g Styrian Goldings). I also added 500g of Belgian Candi Rocks with 5 minutes of the boil remaining.

Once the boil was complete, I transferred to the fermenter via the counter flow chiller. Wort temperature was 20degC so aerated and then pitched the starter of Wyeast 3522 (Belgian Ardennes) I had prepared over the preceding two days. All was done and dusted by just after 2pm, definitely the earliest I've ever finished.

Fermentation was allowed to rise naturally to 21degC and will then be held there for the duration. A quick check this evening and there is vigorous airlock activity and a whiff of foam bananas. Gravity has dropped to 1.036 from a start of 1.060.

Only slight snag with this brew was a relatively low efficiency (72%) compared to normal (~80%). Not the end the world but still a little frustrating. Think it might be a combination of being slightly higher than expected on mash pH (5.6) and the use of a pilsner malt, which both times I've used has resulted in a drop in efficiency.

I did get a few photos but for some reason they haven't auto-uploaded from my camera to the cloud so will have to add those later.

I've not heard of Caravienne malt before - sounds like a more flavourful alternative to carapils. Was there a particular reason for choosing it for the Blonde Ale?

DocAnna said:
I've not heard of Caravienne malt before - sounds like a more flavourful alternative to carapils. Was there a particular reason for choosing it for the Blonde Ale?
Click to expand...

I think that came from the Greg Hughes recipe which I used as a bit of a reference. After reading up on it seemed a good fit to add a touch of sweetness but also boost the body and head retention. Will be interesting to see how it turns out.

Bottled the Belgian Blonde at the weekend so had space in the fermenter to get another brew in today; this time an English IPA using Chevallier malt with EKG and First Gold hops. Hoping for a big bitter orange marmalade vibe when it's ready.

Mashed for 90 minutes rather than the normal 60 as that seems to be the recommendation for Chevallier. pH was 5.2, a touch lower than I was targeting but still ok. Would like to get a bit more accurate with the water adjustments though.

Big hit of hops late in the boil, almost more of an 'American' quantity. Unfortunately as they were whole leaf that did result in ~1L of wort absorption that I hadn't accounted for so have ended up with 19 rather 20L in the fermenter.

Now to wait for yeast to do its thing...