Sometime ago I brewed a NEIPA for the first time. While it was fermenting I did some reading and became aware of the problems associated with oxidation so I bought some Daraform oxygen scavenging caps in the hope that it would reduce any oxidisation. I figured I might as well do a test to see if they made any difference. I posted quite a lot at the time on homebrewtalk.com, if your interested the thread is here.

I wont repost all the same information but just give the before and after effects on the beer for reference for anyone that's interested. In the first test I brewed a NEIPA, then more recently I brewed a session IPA and did some more testing.

In each case the bottles where primed with a sugar solution, then filled directly from the FV using a filling stick. For the bottles that are filled to the top I simply topped them up from a measuring cylinder so they where around 5mm from the top of the bottle neck.

In three clear bottles I have filled as follows.

All beers where stored in my temperature controlled fridge at room temperature for a week then chilled to fridge temperature. They where then stored in darkness in the fridge. 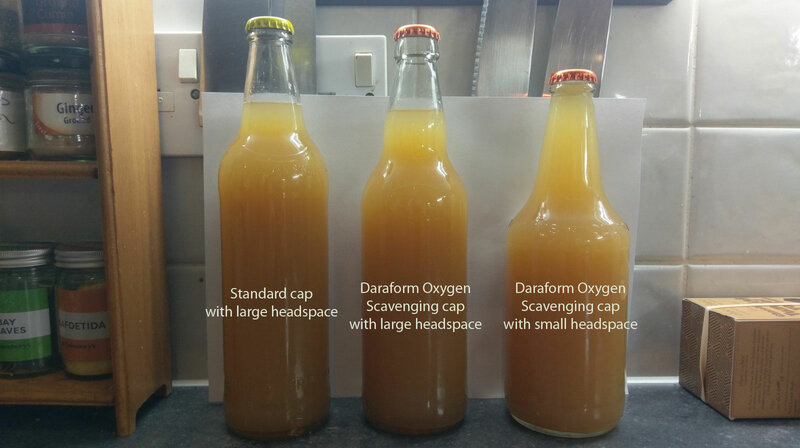 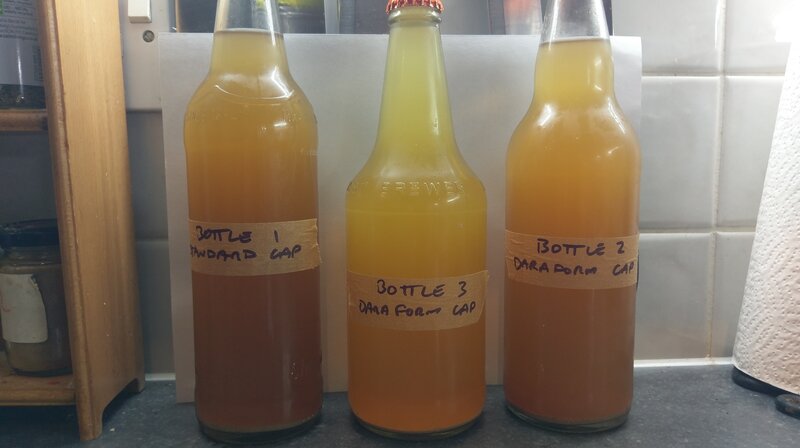 I think its pretty clear that both bottles with the remaining headspace have suffered from oxidisation when bottle 3, filled to the top hasn't really changed much at all. The bottle with the standard cap is maybe slightly darker, but what is more telling is the colour of bottle 3 which is topped virtually to the top. What this test didn't show was if the oxygen scavenging caps would make any difference if the bottles are filled to the top.

Bottling was done in the same way, I filled both bottles to the top and put a standard cap on one and the scavenging cap on the other. In the last photo there also another clear bottle also capped with a standard cap. 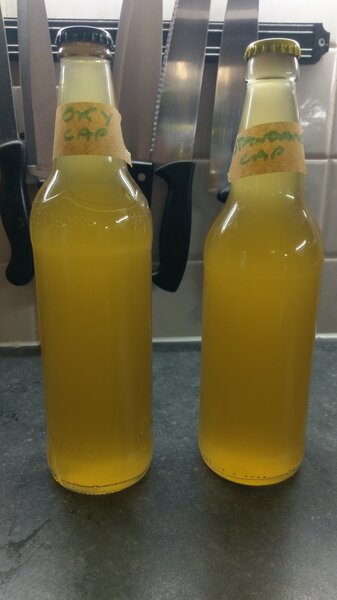 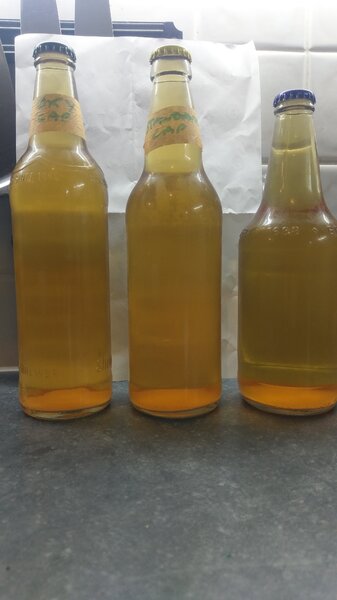 The bottles are maybe a bit more golden on day 135 compared to day 1 but they look pretty much identical in colour. Whether the goldening is from oxidisation, clearing of the beer or just the light making it look more golden I don't know, but I think its fairly evident that the Oxygen scavenging caps have made no difference compared to the standard caps when the bottles are filled virtually to the top. If there has been any oxidising over the 135 days it is certainly not significant. The beer still tastes pretty much as it did on day 1, I think. There is maybe a bit less hop character now but its still there. There was no dry hopping in the Session IPA. All the hops where added during the boil and at whirlpool.

Anyway I am posting this for reference. Hopefully it helps someone out that might be considering oxygen scavenging caps or wants a way of reducing oxidisation without having to keg or purge bottles with CO2. I fill all my bottles in this way now. A word of warning though for those considering do this. DO NOT FILL ALL THE WAY TO THE TOP. I leave a gap of around 5mm, I have done 5 brews since trying this method and have only had one bottle bomb. I opened my fridge to find beer all over the bottom. It took me a while to find the broken bottle because it had literally blown the bottom section of the bottle off but the bottle was still standing surrounded by other bottles. I can only assume I filled this one a little too close to the top.

2 weeks ago I bottled a dry hopped IPA using this method, it will be interesting to see if the hop character stays a while.....

Interesting. How does the carbonation compare between each method?

Wondering if the amount of air/space left in the bottle affects this...

Having previously been used to squeezing all the air out of PET bottles before screwing the cap on, I was concerned with the headspace in glass bottles. Not had a problem but my beers rarely reach the ripe old age of 100 days!

Thanks for posting this - makes for interesting reading. With less head space, did you reduce the amount of priming sugar at all?

sifty said:
Interesting. How does the carbonation compare between each method?
Click to expand...

I haven't noticed any difference but then I wasn't thinking about it when I drank them. There certainly wasn't a significant difference though or I'm sure I would have noticed.


Harbey said:
With less head space, did you reduce the amount of priming sugar at all?
Click to expand...

I kept the priming sugar the same, I figure I still need the same amount of sugar for the yeast to produce the same volume of CO2, I could be wrong though.

When I open a bottle thats filled to the top there is barely any hiss when the cap is removed, but when its poured the carbonation is all there, its still very easy to get half a glass of head if not poured gently.

Thanks. Was asking as I'm doing my first hazy brew this morning and might bottle a few. Looks like filling them up is the answer...
Cheers for the info.

no problem, I'm glad the information helped. Just remember to leave around 5mm gap at the top of the bottle and you should be fine.

I'm certainly going to give this a go next bottling day. Thanks for the info.

I always fill close to the top (yes, half a cm is good enough). You don't get a hiss as you open the bottle but the beer is fully carbonated.
There does have to be some gas as liquids expand and contract depending on temperature and without some head space bottles will break because liquids are more or less incompressable.

Thanks a post well worth reading, I shall try topping up any hop forward beer I bottle.

Edit. I read the original post and don't want broken bottles so I'm not going to over fill.

UPDATE - I have just drank the two clear bottle 'Session IPAs', both bottles at the same time, don't judge..... and I can confirm that there is no taste or aroma difference between them that I can taste. So I'm pretty confident that the oxygen scavenging caps make little to no difference.

Thanks for your efforts on this!

Did you sanitise the caps before using them, or put them on dry? They need to go on dry otherwise any o2 scavenging effectiveness is lost.

I also fill bottles almost to the top when using them, a few mm is all I leave as I do it at room temperature and they only get colder from then on.

Hanglow said:
Did you sanitise the caps before using them, or put them on dry?
Click to expand...

I do sanitise them but its literally a dip in starsan then straight on the bottle. I wouldn't expect them to lose there ability to absorb oxygen that quickly.

I'll maybe try this again next time I make a NEIPA. I think any oxidation will be visually much more obvious that way.

For those that are interested here is another of my Session IPA's in a glass its now 179 days old. This one was in a brown bottle and filled to around 5mm from the top. It still doesn't show any visual signs of oxidation. The hop flavour has maybe reduced a bit, (this one wasn't hugely hoppy), but its still perfectly drinkable. It was the last bottle I filled so had quite a lot of dregs in the bottom but it still poured nice and clear. 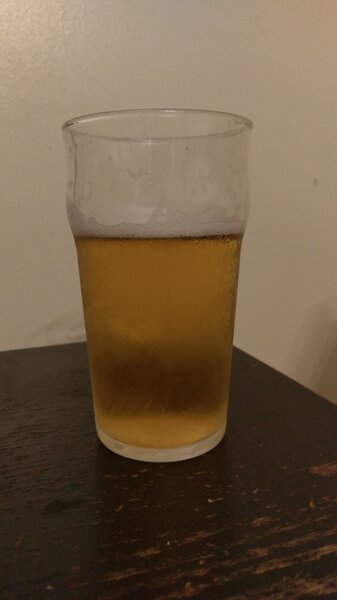 I think your conclusions are good news for all of us, Neale. That the best (if not perfect) solution to this issue is the simple one, that we can all easily apply.

Nice experimenting and reporting. Just to show that one shouldn't panic about the oxidation spectre. If you read across the internet, some people think that their beer gets oxidised even if it just gets a whiff of air.

Your tests corroborate experimentally my own experiences. The things that I do in my brewing process:
The headspace in my bottles is the volume of the bottling pipe. But what I do here is not immediately close the bottles, but give some time so that escaping CO2 pushes out the oxygen, and of course there is the bottle conditioning.

I sometimes brew very pale beers (pilsner, or pilsner, wheat and sugar), and they are still pale after a year. I don't brew overly hoppy beers though, just occasionally adding a relatively small flame out addition or a small hop burst in the last 15 minutes of the boil.

If by 'open fermentation', you mean, in a bucket with a non-airtight lid (or equivalent), chthon, then I certainly do your bullet points 2 and 3. And I am happy with that.

moto748 said:
If by 'open fermentation', you mean, in a bucket with a non-airtight lid (or equivalent), chthon, then I certainly do your bullet points 2 and 3. And I am happy with that.
Click to expand...