Chelsea have agreed terms on the £4.25bn ($5.2bn) sale of the club to a consortium led by Todd Boehly, co-owner of the LA Dodgers baseball team.
The club was put up for sale before owner Roman Abramovich was sanctioned for his alleged links to Russian president Vladimir Putin following the invasion of Ukraine.
A Chelsea statement said the new owners will pay £2.5bn for the club's shares.
The proceeds will go into a frozen bank account to be donated to charity.
The consortium is led by Boehly but Clearlake Capital, a Californian private equity firm, would own a majority of the shares in Chelsea. Other investors include US billionaire Mark Walter, also a co-owner of the LA Dodgers, and Swiss billionaire Hansjoerg Wyss.
BBC Sport has learned the new owners have agreed to not sell a majority stake in the club until 2032 and have given assurances over dividends and debt.
The consortium said it will provide £1.75bn to invest in the Premier League club, including "investments in Stamford Bridge, the academy, the women's team and Kingsmeadow and continued funding for the Chelsea Foundation".
In the statement, Chelsea said the sale was expected to complete in late May. The takeover will require approval from the English football authorities and the UK government.
Chelsea are operating under a special licence from the UK government which ends on 31 May, but last month, Culture Secretary Nadine Dorries said the club were on "borrowed time" to complete the sale.
Any sale can only be signed off by the bidder passing the Premier League's owners' and directors' test.

Boehly, an American investor and businessman, has a reported net worth of $4.5bn (£3.6bn), according to Forbes.
He is a part owner of the Dodgers - a US baseball franchise - and US women's basketball outfit the Los Angeles Sparks, and owns a stake in the renowned LA Lakers NBA franchise.
His consortium also includes American PR executive Barbara Charone, British businessman Jonathan Goldstein and British journalist Daniel Finkelstein.
Other consortiums who had been in the running to buy Chelsea have been headed by Sir Martin Broughton and the co-owner of the Boston Celtics, Stephen Pagliuca, but they were told in late April that their bids were unsuccessful.
British billionaire Sir Jim Ratcliffe - majority shareholder of chemical group Ineos - made a late offer, but it arrived on 29 April, several weeks beyond the initial deadline for bids of 18 March.
Ratcliffe's bid was dismissed but he said on 4 May that he was "not giving up".
On Thursday, Abramovich said he has not asked for his £1.5bn loan to Chelsea to be repaid when the club is sold.
A spokesperson said Abramovich "remains committed" to making sure the proceeds from the sale "go to good causes".
Analysis
BBC sports editor Dan Roan
This is the most significant moment yet since Chelsea was put up for sale, with the Boehly consortium now confident of completing what would be one of the most expensive deals in sports history.
Premier League approval is not expected to be an issue, and the government is keen to get the sale completed.
With concerns raised by rival bidder British billionaire Sir Jim Ratcliffe over the leading role played by private equity firm Clearlake Capital in the Boehly consortium, I understand the club have received an assurance that the group will commit to owning the club for at least 10 years.
In another move designed to reassure fans and distinguish them from the Glazers - the US family that owns Manchester United - I am told the new owners will not pay themselves dividends or management fees during that period.
According to a source, there will also be a limit on the level of debt that the club can take on.

A goal i will never forget still makes me smile when i see it.

Yes such a great player some act to try and follow

Chelsea under pressure from the start lucky to still be 0 - 0 @ 14 minutes.

A fan has been jailed after running on to a pitch and headbutting a footballer at the end of Nottingham Forest's play-off match with Sheffield United.
Billy Sharp, Sheffield United's captain, was attacked after his side lost to Forest on penalties.
Sharp was knocked to the ground and required four stitches to his lip.
Forest season ticket holder Robert Biggs, 30, pleaded guilty to assault occasioning actual bodily harm and was jailed for 24 weeks.
At Nottingham Magistrates' Court on Thursday, Biggs, from Church View, Ilkeston, Derbyshire, was ordered to pay £500 compensation to Sharp, £85 in costs and a £128 victim surcharge.
Biggs, who Nottingham Forest have said will be banned for life, was also given a 10-year football banning order.

'Deliberate and senseless'
Prosecutor Marianne Connally said the attack was caught by cameras covering the Championship semi-final for live television.
"Mr Sharp hadn't directly participated in the game. He appears to be standing with his hands in his pockets," she said.
"Mr Biggs can be seen to run along the pitch. He then headbutts Mr Sharp.
"The crown's case is that this is a deliberate and senseless act of violence. It's an assault on an employee, effectively in his place of work."

In sentencing, District Judge Grace Leong said: "The video clip proves to me that you were running towards Billy Sharp and that you dodged all the other spectators to get towards him.
"I am of the view that it was a targeted act of aggression... even if it was not premeditated.
"You must have seen him fall over but you did not stop to check if he was all right or whether he was seriously injured."
The judge had been urged to hand down a suspended sentence on Biggs, who claimed he and his girlfriend would not be able to keep up monthly mortgage repayments if he was jailed.
But the judge said: "Given the gravity of this offence, where thousands were present to witness it, there has to be an element of deterrence."
The judge added the attack could have "given rise to further incidents".

'Not targeted on player'
Defence solicitor Rachel Gowans said Biggs handed himself in to police in the early hours of Wednesday after seeing video footage of the attack on social media.
She told the court Biggs had drunk "a quantity of alcohol" at a pub near the City Ground and "just followed" two friends on to the pitch.
Ms Gowans said: "He says that in effect he got carried away in the moment... as did a number of people. His sole intention was to get to the tunnel. He remembers running towards the players but to the left of Billy Sharp, looking at the crowd... and then running straight into somebody.
"He accepts that he has collided with the right side of the player's cheek. It's not targeted on the player."
Biggs was told a separate charge of illegally entering the playing surface had been dropped.

After the hearing, the Crown Prosecution Service (CPS) said it was working with footballing bodies to explain what evidence was required to charge offenders to help clubs protect players.
The CPS said this would ensure they had the evidence they needed "to build the strongest case possible".
Douglas Mackay, of the CPS, said: "Over recent years and months there has been a significant rise in football-related criminality compared to pre-pandemic levels.
"There is no place for violent criminal acts in football, and incidents such as these have a significant impact on victims." 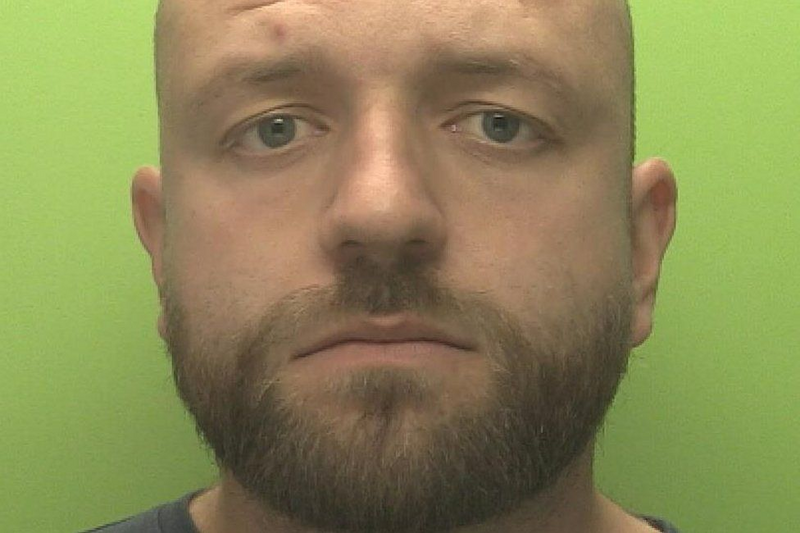 Not his finest moment but do you blame him? 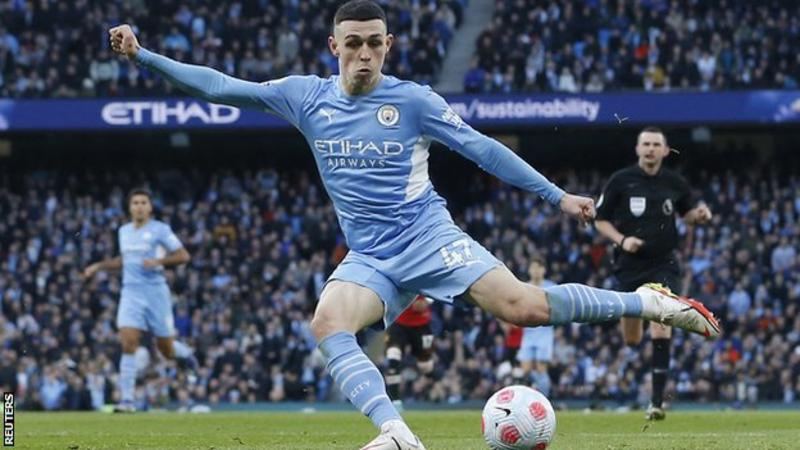 Manchester City midfielder Phil Foden has become the first player to be voted the Premier League young player of the year in successive seasons after winning the 2021-22 award.

The 21-year-old has scored nine goals and provided five assists this season, with City top of the league before the final day of the season on Sunday.
He secured the most combined votes from the public and a Premier League panel.

"I'm very proud to have won for a second season in a row," said Foden.

"I have been really happy with my performances this season and it has been great to contribute to this team in what will hopefully be another successful year for us all.

"To be nominated alongside so many great players is an honour as they have all had great seasons for their clubs."

The England international can help City claim the Premier League title on Sunday - when they host Aston Villa - as his side go into the final round of fixtures one point ahead of rivals Liverpool, who are at home to Wolverhampton Wanderers.

Its like being back in the bad old days players being attacked hundreds of fans on the pitch and not enough police/stewards to deal with it they are discussing it on 5 live and saying fines do not work points must be deducted to stop this before it becomes widespread again.

Your thoughts (football fans only please)

Personally I think Forest should be disqualified and the Blades should be in the play off final, Billy could have been seriously injured there.

I thought a few years ago it was made a criminal offence to go on a pitch, if so then it’s not the poor stewards fault, probably paid a pittance, its the clubs trying to save money as this sort of thing isn’t a regular occurrence recently. 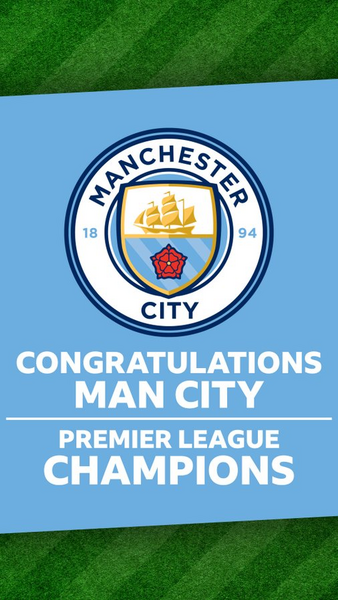 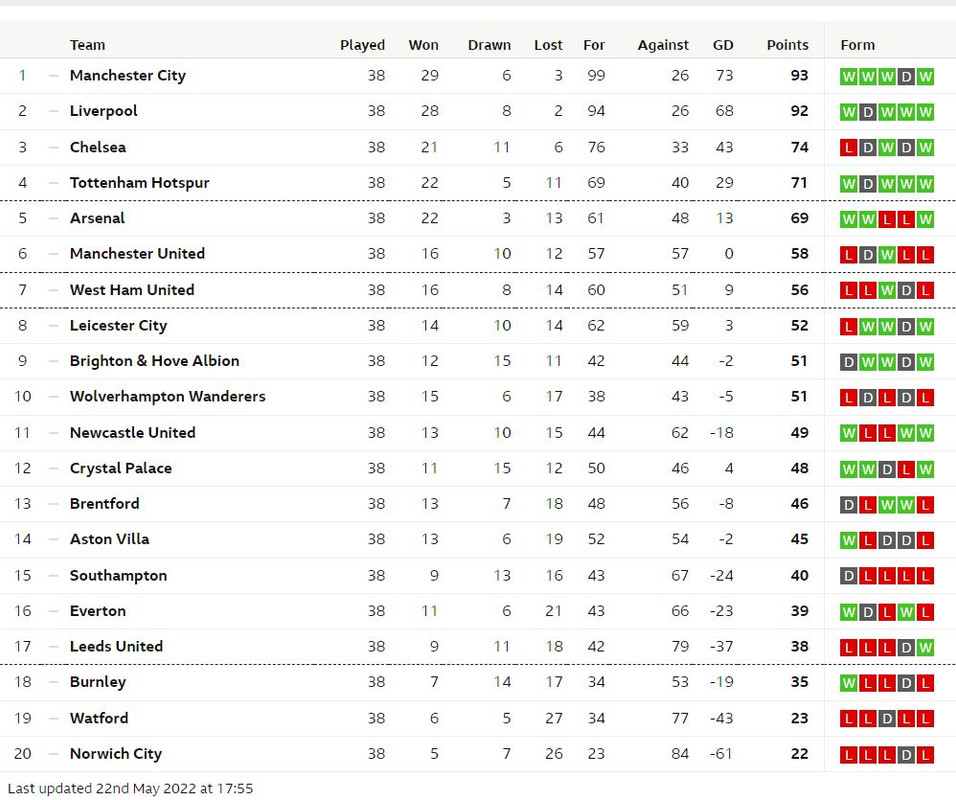 It was a close run season well done

At 2 - 0 down i thought we had blown it i would have put money on it we wouldn't get back into it.

10 years since that Aguerooo moment.

Some really dreadful behaviour at full time. What the hell goes through someone's head to assault a player? Never mind when your team has just won the league. A bit of needle is absolutely key to the culture of football, but this thuggery, plain and simple. These absolute morons need to be banned asap. 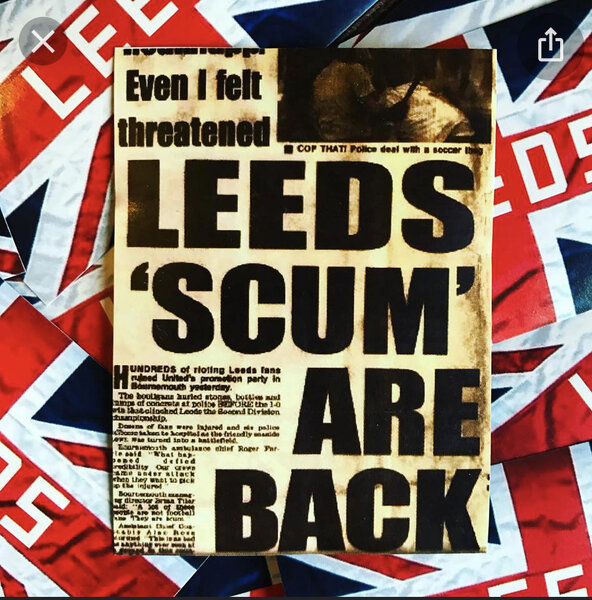 Never easy being a Leeds fan.

SMP Brewery said:
Personally I think Forest should be disqualified and the Blades should be in the play off final
Click to expand...

It’s the only way we could win a playoff

SMP Brewery said:
It’s the only way we could win a playoff

When countries buy football clubs and pour oil money into them, it's not really a straight competition is it? Or remotely ethical, with the human rights records of some of these.

Like PSG, who have agreed to hand Mbappe a £137m signing on fee and £34m a year basic salary. I did smile when I read that Blackpool player Josh Bowler completed more successful dribbles than Mbappe last season. Released by Everton last summer and picked up for nothing.

Not a straight comparison obviously! Mbappe is all pace, Bowler has some trickery too.

Brew_DD2 said:
Some really dreadful behaviour at full time. What the hell goes through someone's head to assault a player
Click to expand...

These idiots deserved to be banned for life and I hope they are the worry is it's becoming widespread so it needs sorting before the next season no one wants to go back to the bad old days of barriers to stop pitch invasions.

League one and two football thread
5 6 7