Back in 2016 I came across a recipe in BYO for Three Floyds Dark Lord imperial stout and thought to myself "I'm havin a go at that for sure!" I was a little frightened of the recipe though because it had a ridiculous OG of 1.165, a full 65 points higher than anything I'd ever brewed. So here we are 3 years later and I'm finally havin a go at it, although admittedly it is a rather watered down version of the original. Still, with an OG of 1.140 it's not exactly a session beer. So after a lot of help from the forum on this thread, I finally settled on the recipe below. It's been through a few versions and the grist isn't quite as simple as it started out, but I had some bits and pieces of leftover grains that I wanted to use up too, so here it is:


Because of the reiterated mash and extended boil time I've decided to split the brew over two days. This evening I'll do the first mash, tonight I'll start the second mash and leave it overnight, then tomorrow morning the boil. I'll update this with some piccys as I go along...
Last edited: May 8, 2019

First of all, this is the vanilla/rum infusion (top) which is 2 vanilla pods chopped into about 35 ml of Kraken dark rum, which will be left to infuse until near bottling time.
The bottom pic is the cold brewed coffee, about 40 g of dark roast ground coffee steeped in 300 ml of cold water, left at room temperature for a day then strained off. 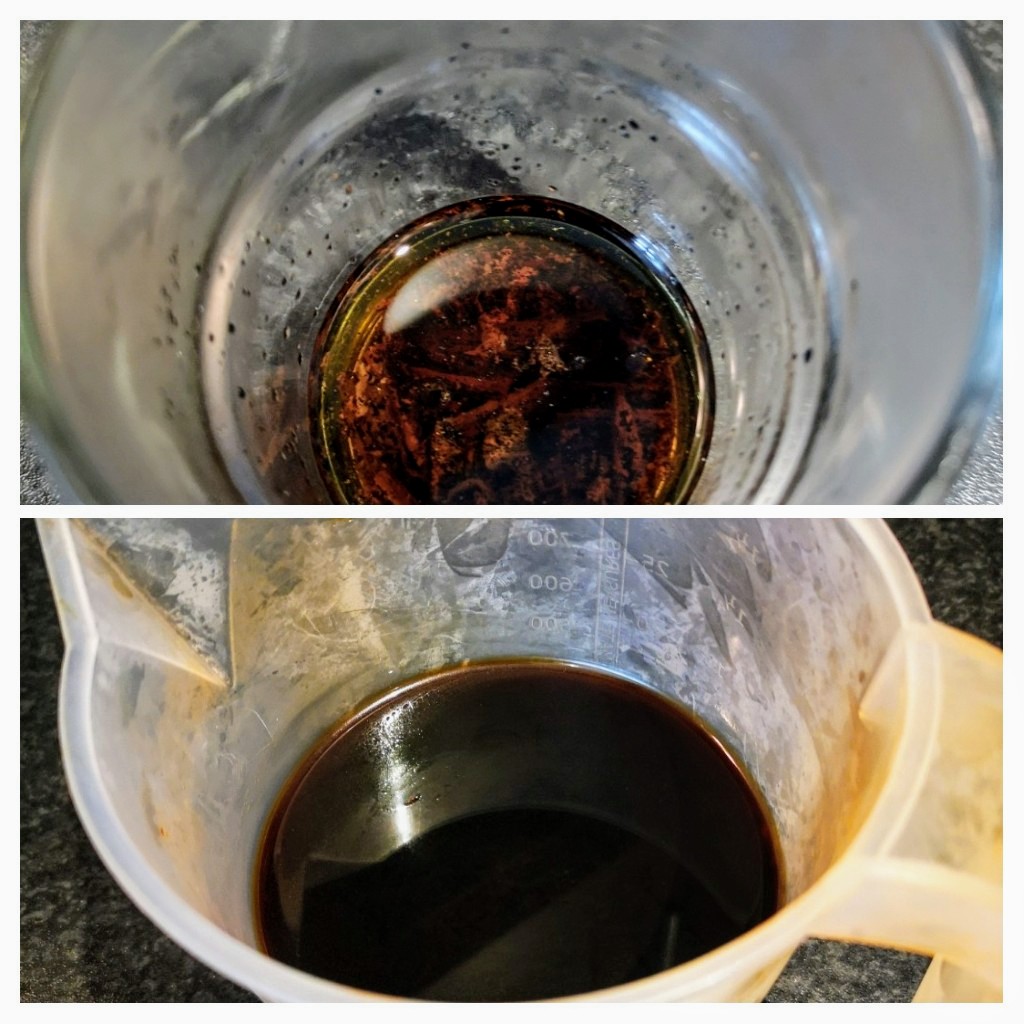 Sounds delicious! Does the perceived bitterness alter with the high abv?

Wow! that's a strong one
Cheers

Clint said:
Sounds delicious! Does the perceived bitterness alter with the high abv?
Click to expand...

According to Gordon Strong alcohol increases the perception of bitterness, however the high FG of this will balance it out.

Ah, Kveik! The only ones that could handle this recipe! 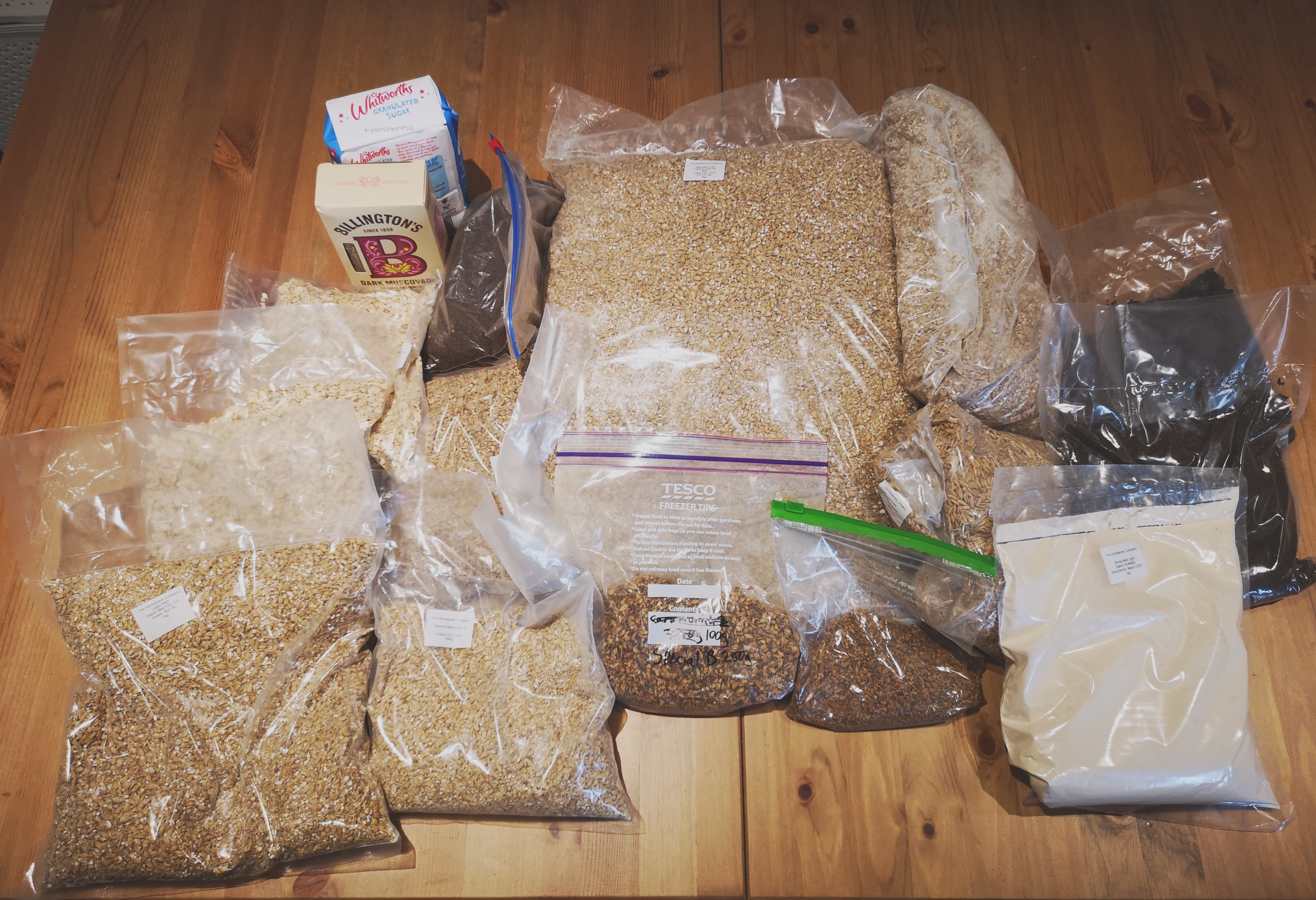 That's an ass load of grain for 18L of beer.

GerritT said:
Ah, Kveik! The only ones that could handle this recipe!
Click to expand...

Yep, thanks to @BeerCat and @Zephyr259 for supplying the kveik yeast

Mash no 1 is now on and as you can see it's a rather chocolaty looking mash. 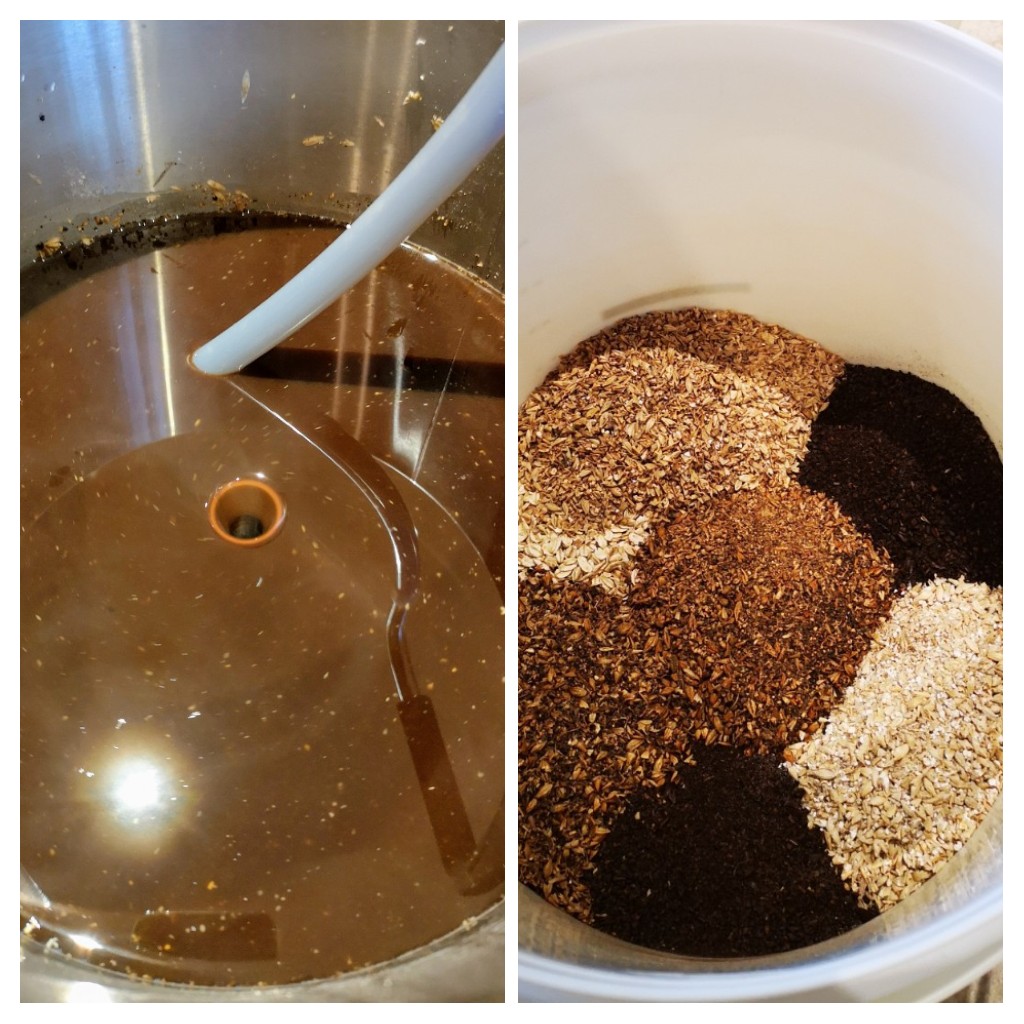 PH at the 20 min mark is looking good, and you might be able to see the el cheapo ebay meter is still looking fine after a couple of years. 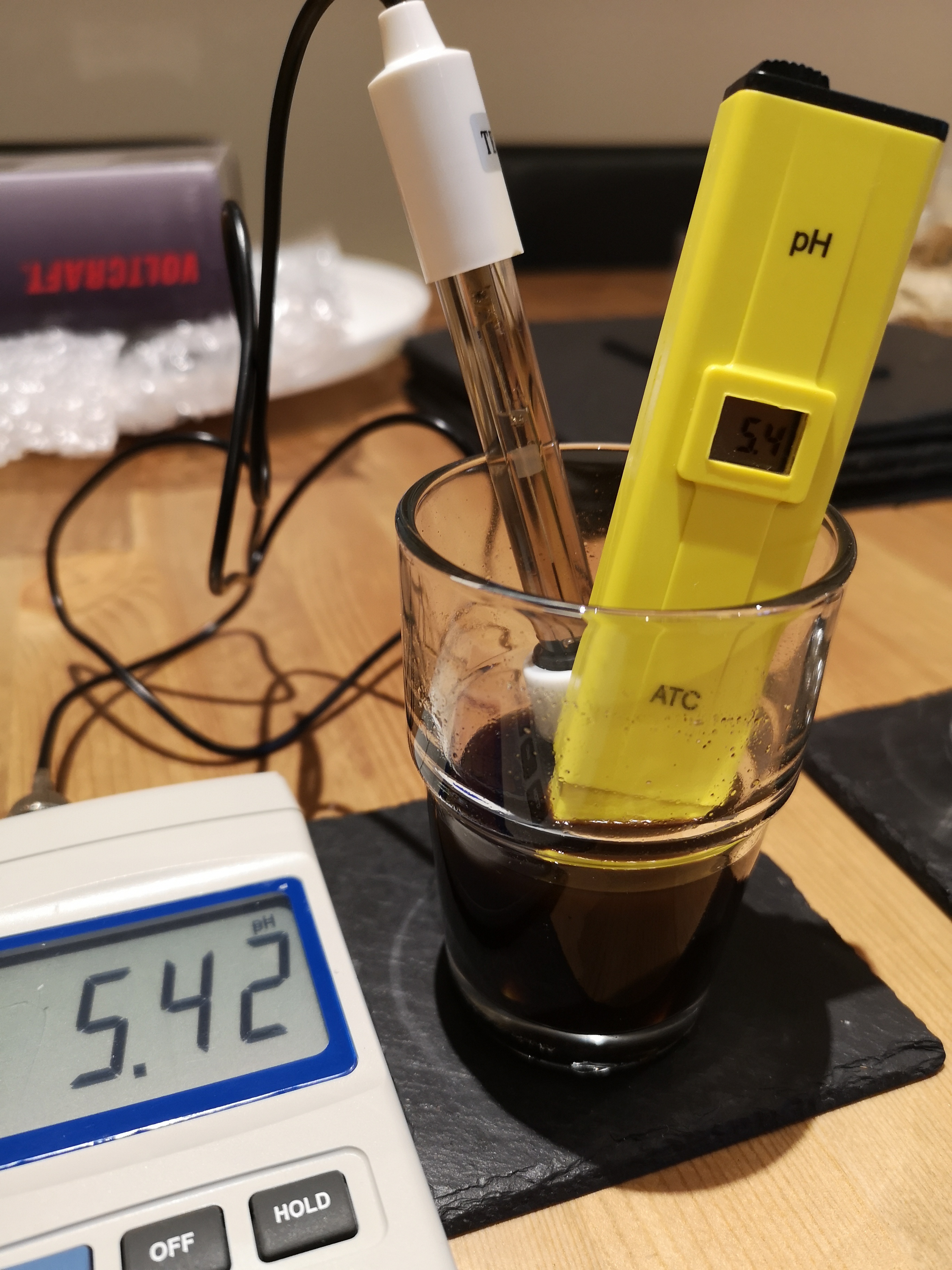 Dirty pictures! Ha without my specs when I seen the packet with a "B" on it I thought "ruddy Nora,he's putting Bisto in it!!".
Re: pH at the 20 minute mark...is this the best time to take it? I've been doing mine in under 15 and it's usually just off the centre,5.4,colour...

I've never hit the "Watch Thread" button so hard. This is going to be fun!

Yeah 15 mins seems to be the recommended time, though I doubt there's much difference in an extra 5 mins. If you're measuring with a mind to adjust mid mash if necessary, then sooner is certainly better.

Thanks...not sure if I'm brave enough yet to adjust during the mash...

OK the first mash and sparge are done and with the SG currently sitting at 1.054 that means a pre-boil efficiency at this point of about 83% which is pretty good so far. Gonna have a quick break (and a beer) before getting the second mash in. It's looking pretty black already with only half the grain used: 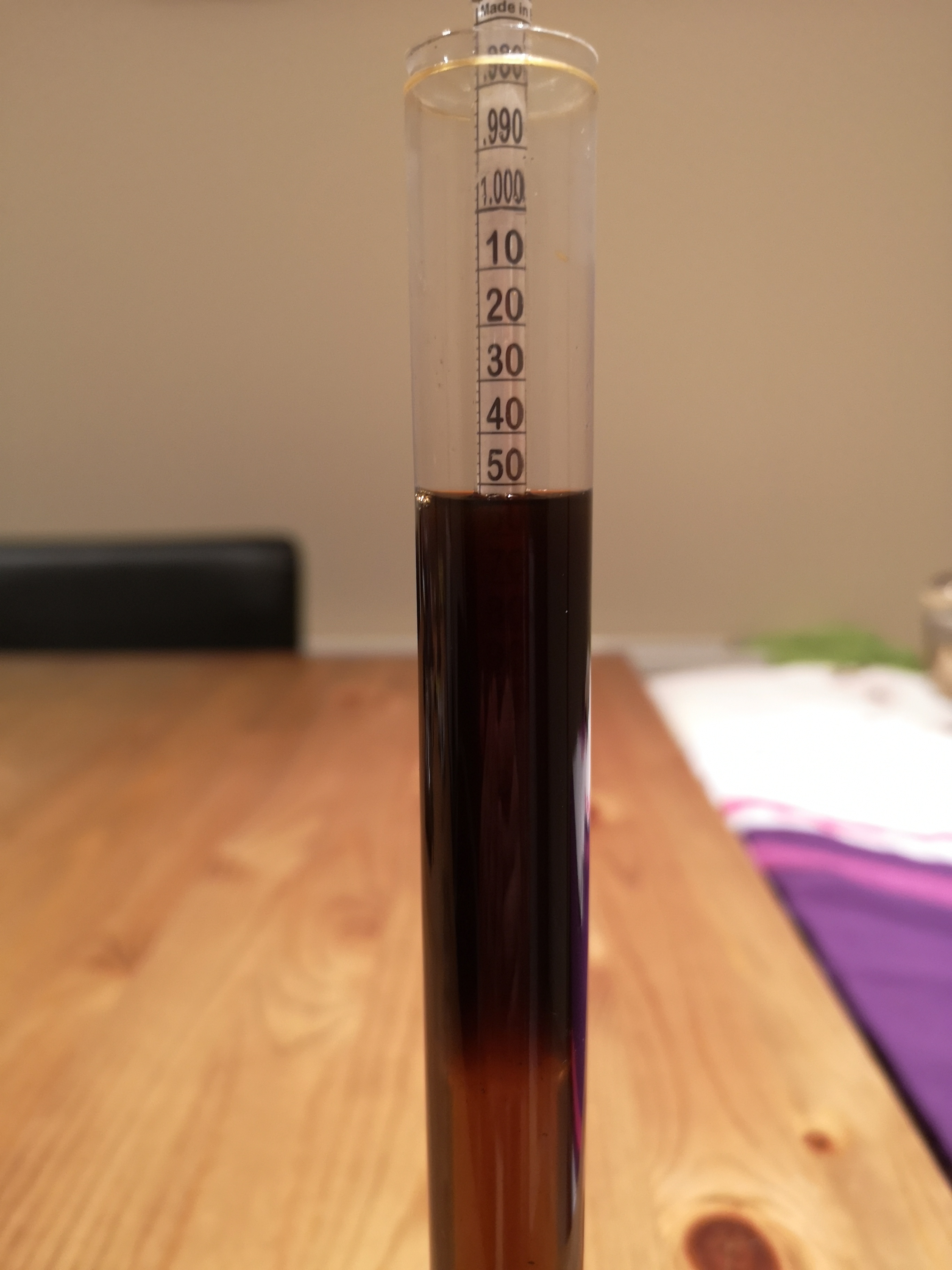 enjoying the thread whilst drinking a shandy like - 10.5% barley wine

For those not familiar with a reiterated mash (I'd never heard of it till recently) basically you split the grain bill in half, mash and sparge as normal then use the sweet wort as the liquor for the second mash. So this is what the second half of my grain was mashed in: 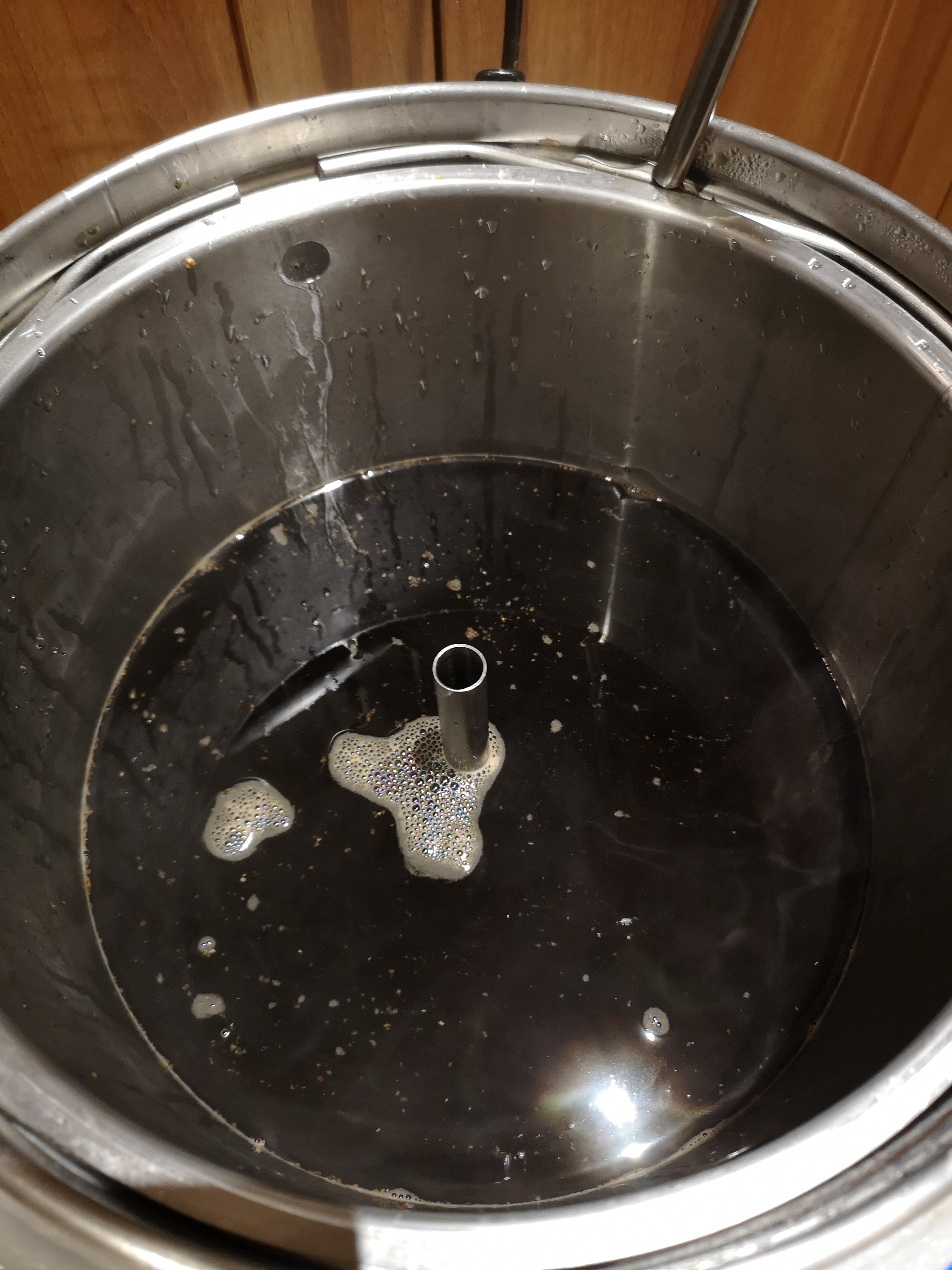 I just had the first (though probably not the last) mishap while mashing in the second half of the grains. I somehow managed to knock off the top half of the overflow pipe while stirring whereupon about a kilo of grain was immediately dumped into the bottom of the GF, so I had to remove the malt pipe and bail out the rest of the wort

Otherwise all is going well. I wasn't sure what would happen with the mash pH second time round, but I added a little sodium bicarbonate and it tested at 5.35 :thumba:

Back at it this morning and a rather interesting update. If you wondered if the reiterated mash is worthwhile as far as efficiency goes, have a look at the following picture. I had estimated a brewhouse efficiency of 60% which would require a pre-boil gravity of 1.075... 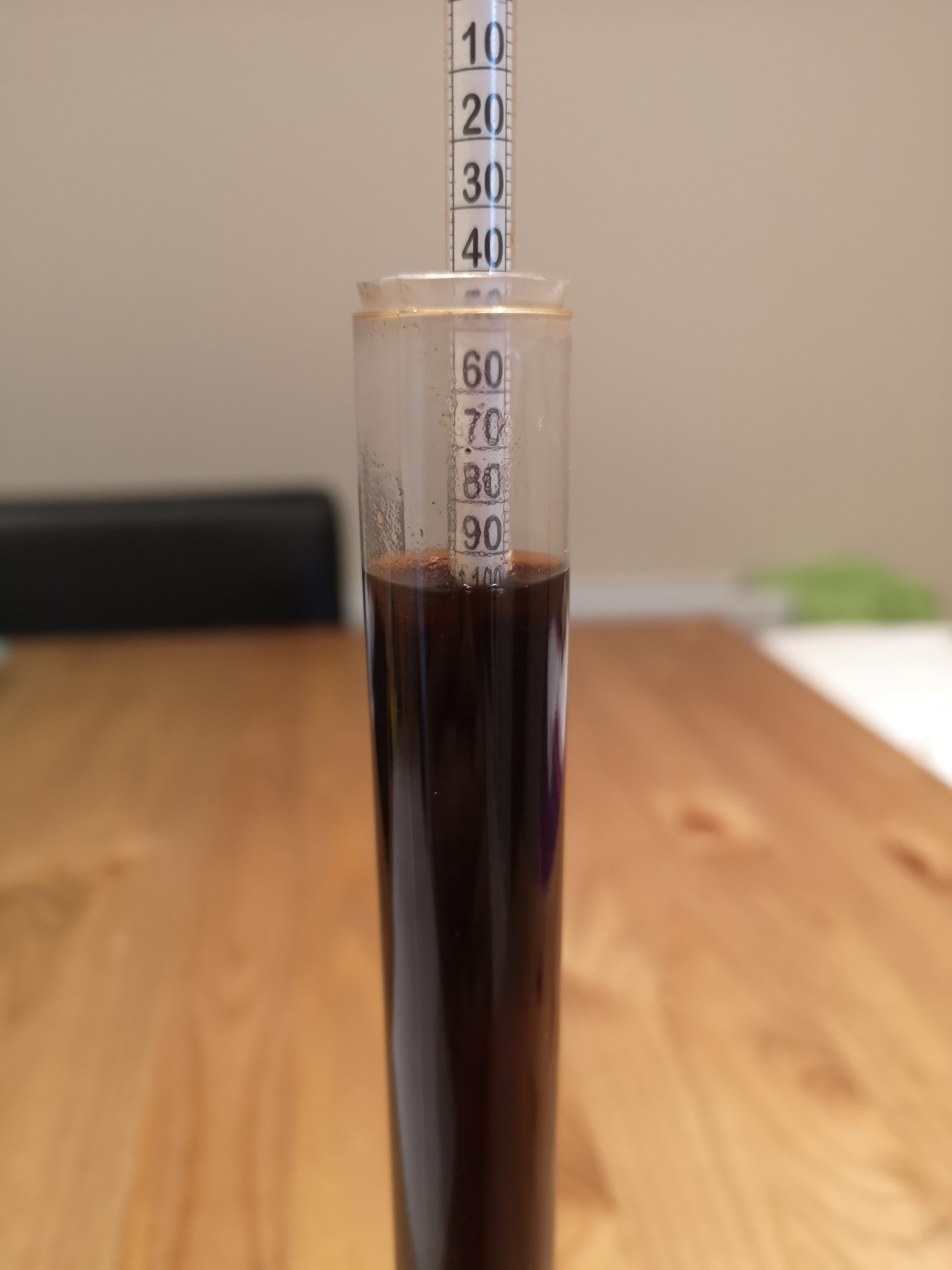 So this leaves me with a choice to make now: