He still has form


He still has form

He knows it alright.

"I'm 75" well you knew that when you put your hat into the ring you cannot use it as an excuse.

The guy scares me.

Problem is that I’ve known some people (especially Italians) who manage to talk with their whole body; and two of them discussing something as mundane as the weather, can sound like they are intent on murdering each other!

On the other hand, if the man is terminally ill, then “Oh dear! What a shame! Never mind.” springs to mind!

That doesn't look particularly Parkinsonian to me. Could be discomfort though.
Last edited: May 23, 2022

Would have to compare to old footage. I don't really doubt he's ill, but just looking at the video and attempting to be subjective.
I also pretended that if that were a healthy twenty-year-old, it just looks like nervousness. The repetitive foot motion was the oddest for me.

I helped pick up four Ukrainian refugees from Stanstead last week. A woman of about 35 and her two children age 1 and 4 and a cousin, also about 35.
The woman with the children had lived in Luhansk but had lost everything in the fighting between between Ukrainians and Russian separatists several years ago. She moved west to Bucha just north of Kiev. We all know what the Russians did there. She subsequently fled to Kiev and then to Lviv, Warsaw and finally to London. Her and her children's worldly positions were all crammed into two suitcases.
She was so happy to be in the UK where her children could be safe at last. They are lovely people who have done nothing to deserve what they have been through.
Meeting these people just brings home how evil Putin and his regime is.

I work in a training centre.
As I type, one of my colleagues has invited refugee based in the area to call in for support.
Of course, all are women with young children.
Puts things in perspective. 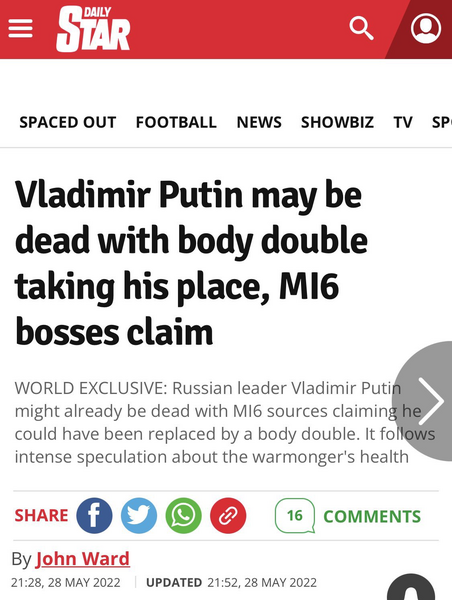 Haven't read the article, but are they speculating that they might be using deepfake technology?

"It must be true. I read it in the Star."
That's always going to be a lie. People who buy the Star only look at the pictures.

Fascinating insight on the Russian offensive in Severodonetsk.
Questions the abilty of the Russian military to sustain the offensive there.
Hopefully, it is correct.

European Union leaders have formally granted Ukraine candidate status to become a member of the bloc during their two-day summit in Brussels.

Ukraine & Moldova have been granted candidate status for the European Union.