I really have a thing going for wheat beers at the moment. I currently have a Dunkelweizen in the fermenter, which is my third wheat based beer in the last five brews.

I'm going to have a crack at a Weizenbock for warming hearts in deep January and February. The recipe is largely an extension of my Dunkelweizen, but with wheat comprising 15% more of the grain bill, and with the addition of melanoidin and rice husks.

Would be pleased to receive feedback on that recipe. I did originally consider 250g of chocolate malt, but was talked out of it by a local friend.

I am quite worried about a stuck mash or sparge, as I did have one recently when using 6.25kg of only Maris Otter. Hence the rice hulls, but I don't really know if they should be considered in the total grain bill nor if I have enough in that bill. Internet research tells me about 5% is generally a maximum.

My mash regime is generally:

Then a 60 minute boil, with the hops added immediately.

I did see a previous thread on here from @strange-steve and his Weizenbock adventures. I only hope mine turns out as nice.

Here's my weizenbock recipe. I probably brewed pretty close to this (I am known for making a last minute tweak

) earlier this year. It was lovely. I didn't get the og as my efficiency was a bit rubbish, and I used mangrove jack's dried wheat yeast as I couldn't get the liquid during lockdown. Was impressed with it. 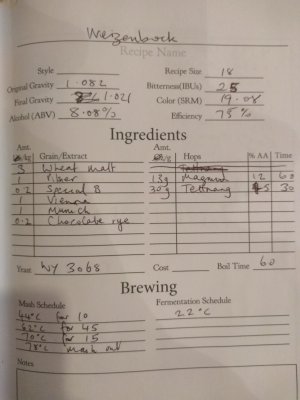 Depending on my brewing efficiency (stuck sparg risk etc), I'd be hoping for 1070 - 1080 OG. I'll probably use Safale WB06. I've found that if fermenting in the 16C - 20C range, this results in more cloves and less banana, which I think will work better for a big beer like this. I've also used Lallemand German Wheat-Style Ale yeast, but this brew ended up overwhelmingly banana/bubble gum, which was not too bad in a normal Weizen.

I spy chocolate rye! Where to get it?? Don't think MM has any...

Clint said:
I spy chocolate rye! Where to get it?? Don't think MM has any...
Click to expand...

I expect that I got it from HBC, most of my grain late last year / early this year did. I seem to have used GEB more recently and I don't think they stock it.

Good luck with the brew

I can't really comment much on the recipe because I've only ever brewed one but it wasn't a million miles away from your recipe. I had a small amount of chocolate malt just to add a little roasty dryness.

What I was incredibly surprised at was how intensely fruity it turned out. It had that plum/raisin/rich toffee fruitiness that you often get in beers with a load of special b even though it just had a small amount of Caramunich I. It was one of the most interesting beers I've brewed in a long time though.

For reasons this never happened at the end of last year. Now it's on for tomorrow! Not sure how much of an early summer beer it's going to be after 3 months aging, but we'll see I guess.

Biggest question mark at the moment is the strike vs sparge water ratio. Looking for roughly a 23 litre batch. After much consultation with local brewers, I'm going with 18 litres strike and 15 litres sparge.

This was brewed yesterday.

Ended up going with 20 litres strike water, as 18 was clearly not enough when mashing in. Therefore, only 13 litres of sparge water.

I ended up using 30g of Sybilla hops, after discovering I'd run out of Perle.

The rice husks certainly helped to prevent a stuck mash or sparge. I had to reduce the circulation flow a little, but in general it was fine.

Unfortunately, my efficiency was a little lower than expected. Starting OG of 1056, which should end up at 6.3% ABV, if fermenting down to 1008. Slightly disappointing that, given the size of the grain bill.

In the meantime, my experience shows that you get a better flow when you extend your mash at 72°C for half an hour. I think there are still things going on which help decrease the viscosity of the wort.