Hi all,
Just planning a West Coast IPA, how does this look to people… the 50g of carapils is just to use up the last of it!
Still deciding whether to do first dry hop during active fermentation or not. A little worried I’m using too many different varieties of hops.

Water profile will be heavy on the sulphate to accentuate the hops. 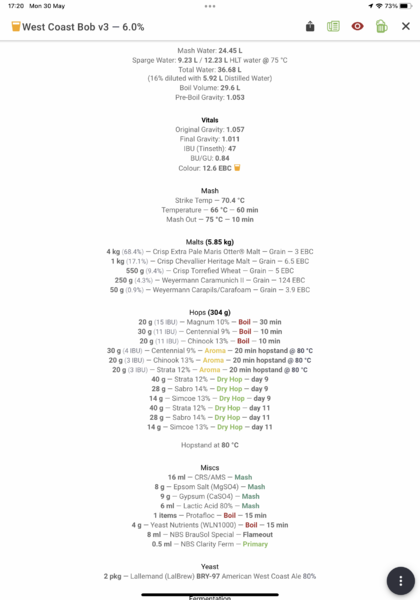 You will get loads of different answers on this.
My opinion is to make sure that you do not have too malty a flavour that will fight the hop flavour, I would drop the Magnum bittering and only do one dry hop the other I would put in the Hopstand/Whirlpool.
I would do the dry hop at day 4 as the main fermentation is dying down too.
Wait for the other answers before changing it as it will be many opinions that differ

I would ask what you are trying to achieve with each of those hops. If you have a reason for adding 6 different varieties, then great, but it looks like overkill to me.

BRY-97 will work out great. Grist looks fine. I'm assuming you are using the Chevalier to use it up too?
Last edited: May 30, 2022

I certainly wouldn't go any lighter on bittering - a WCIPA is meant to be bitter, a BU:GU of 0.84 is about as low as a classic one would ever go. US malts are pretty boring, so the Chevallier isn't that true-to-style but if you want to use it up then fine.

Since you've got the Lutra to hand, I'd use that rather than use a fresh pack.

I'd probably go a bit easier on the dry hop, they're more about the additions at the end of boil and whirlpool.

Thanks all!
Bittering: I think it does need the IBUs, it's a tad lighter than the last time I brewed it. I can play around with larger late additions to achieve the same bitterness, have 100g of most of them and 56g of the Sabro and Simcoe. also moving one of the dry hops to hopstand will up the iBUs as well.
All the different hops: I was using a previous recipe that had everything bar the Strata and it went down very well though not quite hoppy enough for me so though I would add something else to the mix, not used Strata before but sounds like it will add some dankness and fruit, maybe that might suit a NEIPA better?
Chevalier: was just part of the original recipe so kept it in, I think it added to to the complexity of the malt
Hop timings: last time I only did one dry hop, combining both into one, this time I've doubled the amounts for each one, so could whack one of them into the hopstand and still be dry hopping with the same amount as last time.

So, I've simplified the hop bill a tad, moving most of one of the dry hops into the whirlpool. I've kept in a 15 minute addition to keep up the iBUs plus that's when I add nutrient and whirlfloc anyway.

My other choice would be to drop the Simcoe and double the Sabro, I've a 2Oz pack of both and the Sabro is past it's best before date...

My first All Rounder brew