What are you drinking tonight 2020.

The other thread covers 4 years so i have decided to start an annual thread.

Work tomorrow so nothing for me.

Tea. I've been cranking about 75 units a week for 3 years so I'm giving it a rest for a while. What a cheery start to this thread.
Last edited by a moderator: Jan 1, 2020

It’s going to be a hoppy new year for me.
I’ve got lined up Galaxy Amarillo and Mosaic, which is gorgeous, some shop bought Shipyard Rye, Mosaic IPA which is just 5 weeks old and lovely and some Cali Common just to make sure I don’t go hop blind.

ATM it's looking like I'm off it tonight as last night I had five bottles of Hb and a pint of Ghost ship my mate brought round,so not a magnificent amount,but ended up spangled and in a right shape...

On the Wherry again, with time off now, waiting to find out if local homebrew shop is open/remaining open, or where nearest one will be....

The last pint of a Caledonian Porter clone I made

Drunkula said:
Tea. I've been cranking about 75 units a week for 3 years so I'm giving it a rest for a while. What a cheery start to this thread.
Click to expand...

phew - I thought I was partaking a bit to much...

average units per week according to my alcohol consumption spreadsheet...

I should have downloaded it because I can no long find it. It was a really big report but suspect it was taken down due to political pressure.

anyways, my aim is to get back to under 40. Only way I can figure how to do that is start drinking brewdog, stop drinking belgian ales, dipa's and imperial stouts and stop brewing my usual monsters. But as for not drinking.... no chance.

dad_of_jon said:
anyways, my aim is to get back to under 40
Click to expand...

That's about 4 bottles for you, right?

Got a couple of gamma ray left over from christmas, and some HB mandarina Bavaria wheat beers to get me through the darts final and hopefully forget the shower of sh... that Newcastle offered today.

Hyde and Wilde mango ipa. Was looking forward to trying this but it tasted weird for weird's sake - not to my liking...

We are having our 'day after boxing day' today after work got in the way of the real thing... 'Cold Turkey' [comedy festive pun] golden ale I was given for Christmas whilst watching films with my good lady. This was actually quite reasonable but a little too sweet for my liking, not bitter enough. On to some homebrew next...

Having an update taste of my Belgian Cherry ale whilst planning Saturdays brew. Few weeks on and flavours started to mellow a little. That said think the carbonation has dropped so maybe that explains the reduction in bite. 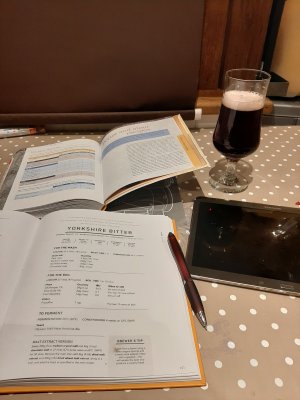 I’m tucking into a Black IPA I brewed before Christmas.
Loving my new set up..... 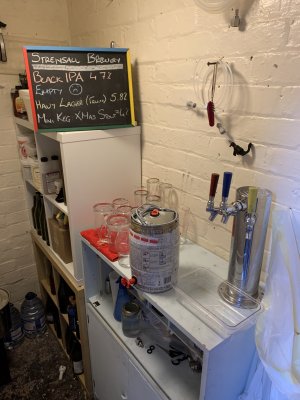 This seems to be improving significantly with age sadly don’t have much of it left now. 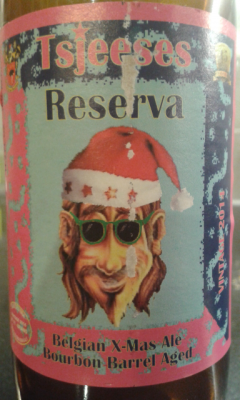 Not bad, but I think it is better when not aged this long. It does have a bit of a wet carton taste, which is of course a pity.

Finishing my Geordie bitter off, always the same the last of a pb is always the best, might crack the wilko red ale later