What did you brew today?

samale said:
I am looking at doing an imperial stout for my first of 2020. Did you use and Candi sugar to bump it up. I was thinking about aging mine with toasted oak cubes.
Click to expand...

I’ve used Candi sugar before and I’m happy enough to use DME too. I got 11 litres at 1.086 last night all from grains which was 65% brewhouse efficiency. I did a full volume BIAB and a 90 minute boil to concentrate the wort. The plan is to add DME after the fermentation is underway and maple syrup later for flavour and an ABV boost. I’m expecting an effective OG after the addition in the 1.100 range, by far the biggest beer I’ve ever made. I got some whisky barrel chunks from Leon which I’ll use for ageing at least some of it.

TrubWolf said:
I took recommendations from several different posts online and tried to keep it simple (1st brew with my new kit):
4kg Maris Otter
250g Crystal (400)
25g Progress @60
25g Bramling Cross @30
15g each Fuggles & EKG at end of boil
There was a post showing Harveys use sugar but I was always struggling to get the O.G. low enough.
Ended up with 1045 and 19L - a bit high and not enough. Added Mangrove Jack M36 and is bubbling like a good-un in the garage.
Will let you know how it turns out
Click to expand...

Just for the record @foxbat this has turned out uncannily similar to Harveys Best Bitter - so much so I surprised myself. Whoever recommended using Mangrove Jack M36 was spot-on with undertones of banana...

TrubWolf said:
Just for the record @foxbat this has turned out uncannily similar to Harveys Best Bitter - so much so I surprised myself. Whoever recommended using Mangrove Jack M36 was spot-on with undertones of banana...
Click to expand...

Thanks for getting back to us with that. Each time I have a pint of Harvey's in the pub I remind myself to put it on my to-brew list.

Nothing fancy, Woodferde's Wherry kit, just going to add a hop tea at about 4 days to pimp it! Just a little!
K

Today my first brew of 2020 - and my first post in a while ....
Ingredients I had to hand:
- Woodforde's Admiral's Reserve - one can only
- 450g Brewing Sugar
- Croosmyloof Brew US Pale Ale Yeast
- Water to 15l
- OG 1.055
When I did the first can last year (similar recipe with kit yeast) there was also a sachet of hop enhancer. Maybe for this one I put in a dry hop bag - have quite a few hop odds and ends.

Made more Kolsch, the last one was brilliant. I changed it up slightly with just a little Magnum at the start then lots of Saaz at the end to use up the packet.

Now sitting in the fridge at 16°c

Set a rhubarb cider going.
20L of tesco pure apple Juice
Around 2.5 - 3L of rhubarb juice (freshly pressed/squeezed/wrangled)
1L of strong tea (As per tip on here)
Pectolase (as per instructions)
1 packet of cider yeast.

Was a little slow to kick off but now bubbling away like mad!

First brew on my induction thingy. Easest brewday ever, easiest mash ever** ( so I thought ).

I was using the Inkbird wireless to take the temp of the mash. For the first 20 minutes it was 0.2c above the temp I wanted (66.8c) so I knocked it back with some cold water to 64.7c and I thought that's low, but fine - left it 15 minutes, it was the same temperature, wow. Came back a few times, thought my new insulation setup is perfect.... Stilll at 64.7....left it another 100 minutes. Still the SAME temperature - yehhhaaaa!

Then I pulled the temp probe out. No temp change. The inkbird had crashed. Turned it off and back on and the probe not in the mash was dropping from 48c. I put it back in the mash. 61c. Not terrible, joke brew and all that but after other experiments I've done with the Wireless version of the Inkbird I think it's good, but you can't trust it for process critical situations.

And if I'd been using the Inkbird to monitor the temp coming up to the boil (I use the STC-1000 alarm at 98c) and it crashed it could have been a bit messy.

Look at me being all solemn! So mash dropped a bit but if it crashed waiting for my boil alarm - aiiiyeeeee!
Last edited: Jan 10, 2020

After having @Ajhutch American amber ale in the sercert Santa which was lovely I thought I would get one on.
3.5kg Minch malt
I kg Munich
350g caramunich 1
150g crystal 80

Hops will be Chinook and cascade.
Haven't decided on a yeast yet. I can go S05 or kviek
A

Was a little slow to kick off but now bubbling away like mad!

To add:
1/3 peel of one Grapefruit at one week (5grams)
15grams Mandarina Bavaria at one week. 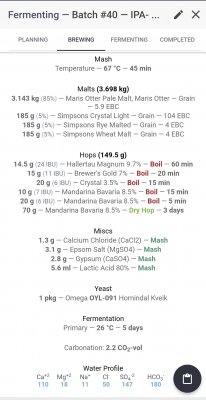 First brew of 2020 was a Euro IPA. First time using kviek for this batch. Sparging took ages, must have been the wheat and malted Rye. I thought two handfuls of rice hulls would have sorted it but hour long sparge and ended up with a lower pre boil volume and a few points higher on the gravity . Let's see what this kviek is made of

Put a brew on last night. Didn't quite have all the ingredients but winged it none the less. It is a Mosaic American Pale Ale with a hint of CTZ mid boil.

plastic bag kit this weekend, americian ipa, blooming nightmare getting the bag empty, next time its a pair of double rolling pins to squish it out
T

Kolsch smash is in the fermenter bubbling away nicely at 16°C.

Hit my OG target spot on at 1.050 and it looked nice and clear in the beaker.

Slightly missed my volume unfortunately - only 20L eventually made it into the fermenter (along with a small amount of cold break which sloshed its way along for the ride!)

Any recommendations on how to manage boil and transfer losses?

klaus said:
Today my first brew of 2020 - and my first post in a while ....
Ingredients I had to hand:
- Woodforde's Admiral's Reserve - one can only
- 450g Brewing Sugar
- Croosmyloof Brew US Pale Ale Yeast
- Water to 15l
- OG 1.055
When I did the first can last year (similar recipe with kit yeast) there was also a sachet of hop enhancer. Maybe for this one I put in a dry hop bag - have quite a few hop odds and ends.
Click to expand...

UPDATE:
On Monday checked and fermentation is almost at an end - put in a sock of hops (30g Cluster - 2014 vintage but seemed ok) for dry hopping.
Today (Thursday) I checked the FG it showed 1.006 - make this 6.4% ABV, say 6%. A crisp taste with good strength and a flowery hint aroma, so maybe the extra hops are helping with that.
Planning to bottle coming Monday.
You must log in or register to reply here.
Share:
Facebook Twitter Reddit Pinterest Tumblr WhatsApp Email Link