We had a coal fire in my mams. I used to go out sawing logs with the old man...and picking coal off the slag heaps when times were tough.
My house just has gas central heating which I don't like using much as it seems to make you feel all stuffed up in the head...
I like log burners...last year we spent a week in a seaside shack in the lake District...total peace and quiet...the highlight was collecting driftwood for the burner,stoking it up and settling in with a few home brews!

I don't know why everyone is surprised at this ban!

The government have been promoting wood-burning stoves for houses and wood burning power generation for years now, just like they promoted diesel engines for cars!

Whenever I think of this government I automatically think of "**** Up" and "Brewery" for some reason!

"There's posh for you!" as they say in Wales!

I can never understand why every room in a house has to be heated, especially bedrooms, bathrooms, toilets, kitchens and hallways; and even more so when every high street in the UK has a dozen or more Charity Shops that sell cheap pullovers, sweaters, scarves and hats!

Many times on TV I have seen people sat in summer clothing in the middle of winter complaining bitterly about how much they have to pay for their heating, when a tenner spent on warm clothing would have seen them sorted.

"More money than sense." just about sums up lots of people in this country!

I don't like being cold, but I have never my house so hot to be able to sit in the t shirt in the middle of winter.

But If I don't heat, my bedroom would got to low teens if outside is around 4-5 degrees. No thanks

How did you know we is posh? I do encourage the jumpers Dutto...

Sod heating. It just gives me the opportunity to lager!

LAGER ..hipster jive for sitting there freezing your knackers off.

Clint said:
LAGER ..hipster jive for sitting there freezing your knackers off.
Click to expand...

Im sacrificing for my art

I bet you are a vision of cool...hand made string vest,flip flops and mohair under garments!

MyQul said:
Im sacrificing for my art
Click to expand...

Im sacrificing for my fart

Gunge said:
You need to visit some industrial / distribution premises in the middle of the night and make off with all their pallets which you can then chop up for fuel. Scavengers are at it all the time at our works. I just tell 'em to help themselves... I could not give a toss.
Click to expand...

No need to visit in the night, come to our place in Wakefield during the day, you can have as much as you can carry.
I have to pay £125 ever month to have broken pallets taken away.

Clint said:
I bet you are a vision of cool...hand made string vest,flip flops and mohair under garments!
Click to expand...

Most people probably know this, but pallets are terrible to burn as a heat source. A little bit here and there is ok for fire lighting and such, but if you burn them regularly you'll figure it out the hard way. On a big open fire with a massive chimney sucking it away you'll not get big problems, resin, oil, pine, creosote etc build up, but the width means while you usually get cooling in the upper third of the chimney where you'll get deposits and erosion. It'll take a long time to cause a problem though. You'll always be throwing them on though. On a stove with a flue they'll block or eat them out pretty quickly. Also you'll always be throwing them on. There is also the question of what they were used for, either where you get them or where they were before. Don't know what has been soaking into them on random warehouse floors. I'm not too fussed personally, but some of the ones you'd get where I work are pretty frigging evil, all sorts of chemicals soaked into them off the floor. I wouldn't want to burn anything which is going to form anything corrosive to attack the chimney.

That's just a normal healthy lager fermentation. Well thats what I tell MrsMQ, anyway (havent got a dog to blame it on)

Pallets are treated with all sorts of toxic fungicide chemicals. A few years back one such chemical was an arsenic compound. Burn them in your wood burning stove at your peril I say, or perhaps you just don't like the neighbours. That said it can't be any worse than the crap that is discharged up the chimney when that well known 19th century fuel coal is burned.

Mentioned it to Blue. He's not impressed. He loves his wood burner. 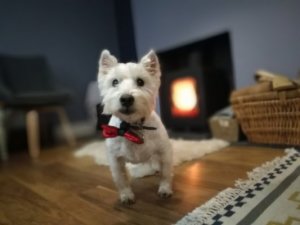 Dutto said:
The government have been promoting wood-burning stoves for houses and wood burning power generation for years now, just like they promoted diesel engines for cars!

Whenever I think of this government I automatically think of "**** Up" and "Brewery" for some reason!
Click to expand...

It was Gordon Brown as Labour Chancellor who originally changed VED to encourage a shift to vehicles with lower CO2 emissions, and since diesels were better at that than petrol, many people moved across to owning a diesel car.
What you should be saying is that successive different political administrations are really as bad as one another for cocking things up.

Makes me laugh really, I remember getting a gas fitter round with a view to putting in a fire in our sitting room and he said sod it mate thats a perfectly good open fire, flue etc just use that no one will grass you up and on which l burned responsibly. In south east london if you are walking the streets there will be the occassional smell of a fire, but more likely the heavy smell of skunk weed. Even my young kids smell the hash and observe that we must be nearly home. I have since put a log burner in and it seems as clean as could be but for me this is just another tilt at law abiding citizens - far easier to go after us than folk that smoke drugs in the bus stop/ hospital/ station/ everywhere.

The French love them