We need a yeast sticky, what people use, what yeast does what, peoples experiences with a particular yeast. Abv toerlance, malic tolerance best of cider, wine, meads etc.

You now have it. :thumb:

Gervin GV4 high Alcohol (21% abv tolerant) - low foam ( not that low still produces a fair head 4 inches and more on occassion) Fairly Quick ferment to 16% (1 month), after that 16% almost all yeasts seem to take ages. Have used on Banana, mead, Blackberry, I'll add more as I look through posts. 5 gallons goes for around ÃÂ£1.10

Harris Premium Yeast (18% abv tolerant) - low foam, really low inch at most when busy. Again a quick ferment upto 16 (1 month). Great thing with this yeast besides low foam is it's temperature tolerance from 10c - 35c so handy in for both cold winter and high summer ferments. Have used with Mead, blackberry, wow's, Damson, sloe and many other wines. Works with cider, sparkling wines. gallon pack For around ÃÂ£1.10

Youngs Super Yeast Compound - (abv tolerance ?) I've only got to 14.5% with this yeast, is easily available in a few supermarkets can foam up fairly quick < month, one advantage is contains yeast nutrients and bentonite (which helps in clearing the wine naturally). Fairly cheap for 60g tubs ÃÂ£2.50. Have used with various fruit, wow's and vegetable wines found problematic with high sugar and high abv wines above 14.5%. Not used with mead personally.

Lalvin EC-1118 - This is a favourite of many a champayne yeast for dry whites, fruit wines and speedy ciders, high abv tolerance of 18%. Contains the bayanus strain of the Saccharomyces yeast. Low foam, can foam up though. Sells for around ÃÂ£1.25

Harvest SN9 - Another Bayanus strain of the Saccharomyces yeast. This adds body and has a high abv tolerance of 18%, bit more expensive at ÃÂ£1.50 +, can be used with most country wines, fruit and veg' and white grape wines.

Have more but will let someone else add their tuppence.

Lalvin D47 - For around ÃÂ£1.15
Consists of the Saccharomyces Cerevisiae strain of yeast. Abv tolerance of around 14%, ok for a nice evening mead, but find better yeasts a higher abv such as the Harris above.

The ICV D-47 is a low-foaming quick fermenter that settles well, forming a compact lees at the end of fermentation. This strain tolerates fermentation temperatures ranging from 15ÃÂ° to 20ÃÂ°C (59ÃÂ° to 68ÃÂ°F) and enhances mouthfeel due to complex carbohydrates. Malolactic fermentation proceeds well in wine made with ICV D-47.

Recommended for making wines from white varieties such as Chardonnay and rosÃÂ© wines. An excellent choice for producing mead, however be sure to supplement with yeast nutrients, especially usable nitrogen.

Gervin GV13 - Quick fermenter got to 1003 slight dryness to me, very dry to others. I paid 68p but around ÃÂ£1 normally. Thing with this I noticed is high h2s production, hydrogen sulphide, I noticed on a datasheet for another yeast that they included low h2s production, so might be a thing with some yeasts.

So If anyone notices an eggy smell with this yeast or any other wine/cider yeast and the end product tastes fine post the name of that yeast. This will help those who post 'my wine or cider smells eggy' during fermentation, to match to the yeast they have used.

I've used a few on Tau's list and I've not had any bad experiences so far, I make pretty much only Turbo Cider and supermarket juice wines (or WOW's).

I generally use Youngs Super Wine Yeast Compound for the wine, that's always worked well and it's easy to get if you don't have a home brew shop handy. I usually always have a 'spare' tub in my box of bits and pieces !

For TC, I've used a small range of yeasts, Mangrove Jacks, Gervin & Youngs cider yeast, all with good results, but they always came out fairly dry....

The characteristics are listed as
Volume: 8g, each makes 25L
Brand: Hambleton Bard
Feature 2: Allows you to ferment your cider longer without finishing too dry
Feature 3: Add straight to brew, no need to make a starter.
Feature 4: Suitable for 20-25L
Feature 5: High alcohol tolerance.

If you aren't afraid of a little E950 (Acesulfame K, 200 times sweeter than sugar), it takes the edge of the dryness and gives me just the right taste for my TC's :)

A link for this stuff is here, this is the seller I get mine from and have never had any problems
http://www.ebay.co.uk/itm/3x-Cider-...711621?hash=item3f32c50245:g:xRMAAOSwGvhUILSN

Anyone know the actual strain / equivalent of Wilko's Universal wine yeast? I like this stuff but they've been out of stock lately, so I've been using Young's Burgundy and all-purpose white. Not too impressed - ridiculously, unacceptably foamy then the last quarter of fermentation goes on forever. Using Harris premium now until I can get more Gervin or the equivalent. The Harris itself is a new one on me... see how it goes.

I've put down four small 8 litre batches using the following yeasts:
All yeasts are dried, sachet based. All yeasts were re-hydrated in 200ml of water for 15 minutes prior to pitching in the most.

I was really aiming for differentiation on taste. Unfortunately I chose badly when it came the shop juice because it's cloudy, and I haven't specifically added Pectolase to clear it (not even sure if that'd work with pasteurised shop bought juice), which means there will be no differentiation by clarity. 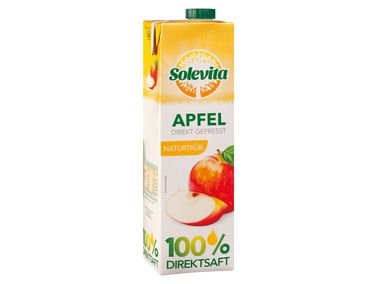 Starting gravity was 1050 and acidity pretty much exactly 5.00, as near as I could measure.

The CBC-1 and E-256 batches both attenuated all the way down to 1000, which was expected as both yeasts have a very high alcohol tolerance. I originally bought several sachets of these yeasts to use in meads. Neither yeast produced much krausen, although some was evident with both. Both yeasts appeared to finish fermentation quite quickly, perhaps within 4 days, but certainly within seven.

The T-58 and S-04 was bottled today. The T-58 attenuated down to 1002 and the S-04 down to 1004. The T-58 produced no krausen at all that I could see. The S-04 produced a very light krausen within the first 24 hours, which then disappeared quickly. Both yeasts seemed quite slow to ferment and new CO2 bubbles were appearing well after day seven.

The T-58 had a very definite rotten egg aroma. However, the sample tasted fine, although slightly acidic.

The S-04 had a more fruity aroma and the sample tasted much less acidic than the T-58.

Also, the S-04 hard a lovely hard yeast lees in the bottle of the demijohn, which wasn't really disturbed very much during siphoning. In contrast the T-58 lees were still quite fluid, were stirred up a lot by siphoning and resulted in more cider left behind as it became mixed with the lees. Picture is of the S-04 lees. 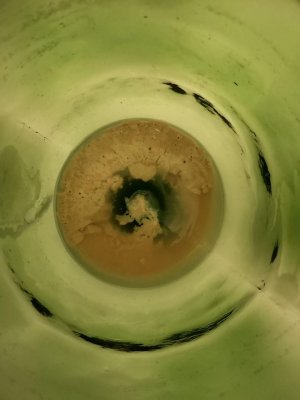 This might be of some use - if it's not then delete this post, I don't mind:
https://www.homebrewtalk.com/forum/threads/results-from-juice-yeast-and-sugar-experiments.83060/

That's a great thread. I've only read the long first post, and not the following 29 pages yet. I'm pleased to see that my choice of S-04 appears to be a good one, as it makes the "top yeast" list on that thread. However, I'm also pleased to see my other three yeast choices so far haven't been included (at least on the initial post). Therefore, perhaps I'm adding knowledge somehow. I am quite keen to try Nottingham, Abbaye Ale and Brupak Ale yeasts now.

Mead made with Kolsch yeast