Cider with apples stored over winter

Had some apples in the cellar over winter. Needed to do something with them, so made this 8 litres of cider. Starting gravity 1052. Used Mangrove Jack Cider Yeast M02.

I also learned that using a juicer to make cider sucks.

Last week I bought a juicer. I thought to myself, self, wouldn't it be easier for small batches just to use a juicer, rather than get out the whole grinder and press. Well, it's not. All the apples have to be quartered by hand to fit in the juicer top. And the juicer pulps stuff rather than presses it. That means the juice is thick and pulpy, which is not really what you want. I had to strain it twice before getting to this point, and was already spooning off creamy head constantly. Also, the juicer i bought said it could do 3 litres before having to empty the pulp. It's not true for apples! I was lucky to get 750 mls before I had to stop and empty the pulp catch tray. Seriously, even just for 8 litres, knowing that the clean up would be bigger, I'd still next time go the grinder and the press. Less fiddling around and a better quality of juice. I also reckon the press is more efficient. The pulp from the juicer was always quite wet. The pulp from the press is actually quite dry.

Anyway, two days later, everything is bubbling away nicely. My cellar is about 15 degrees Celsius at the moment, so I wrapped the ferment up nicely, which seemed to do the trick.

Also made a small 5 litres batch of beer from this keg thing I was bought for Christmas. That was quit easy actually. Pour in the liquid malt, add water, shake hard, add liquid hops, add water and that was it. Apparently 5 days at room temp and two in the fridge and it's ready to drink. We'll see.....

It's started snowing here again. Typical, after one of the warmest winters for forever, some glorious weather just a week ago and now the snow returns (while we're all quarantined). The temperature in my cellar has dropped to about 12.5 degrees now. I'm hoping the fermenter is a few degrees warmer and generally steadier within it's quilted wrap.

It's Day 4 and the fermentation has dropped off, but still the occasional bubble out the airlock. This feels about right I suppose compared to previously, although I've not used this specific yeast before, so it's tough to compare. Still, fermentation occurred pretty steadily for a solid three days and now slowly for a fourth, so there should be some ethanol present, even if the cider ends up a bit sweeter. I haven't disturbed anything to take a sample for gravity reading. I'll do that on Day 7 when I bottle.
C

I've done a good few batches of cider from raw fruit and I've found it to be the most forgiving brewing experience ever. I'd probably want to get the temperature up a bit though. Do you have a belt heater or something to warm it?

Quick question though, how did you go about storing the apples all this time? What sort of container? and Whats the humidity like? I'd love to be able to lay away some apples as I often have more than I can brew at one time

The Mangrove Jack M02 says, "For best results ferment at 12-28 deg C. If my cellar is now 12.5 deg C, and the fermenter is wrapped in that quilted jacket, I reckon it must be one or two degrees higher, so I'm not overly concerned. I do have a tray heater I could put the fermenter on, but I am just tempted to leave it to see what happens.

I stored the apples over winter in a garden storage box (something similar to these you could buy from Argos: Garden Storage Boxes | Outdoor Cupboards | Argos). I see I did say they were stored in the "cellar" in my first post. The garden storage box is actually in the garden. The apples were on cardboard fruit and veg trays. This seems to work pretty well and I reckon the garden storage box was just enough to prevent the apples freezing (that and the fact it's been a pretty warm winter. We hardly had any snow, maybe only 2 or 3 days).

There was a bit of attrition, but not much. I've just gone outside in the Baltic conditions and taken a picture of one of the remaining boxes. As you can see it looks like I've lost one apple from the tray (I'll sort that in the morning).

In late October last year I obtained about 100 kg of apples. Due to a combination of two weeks laziness and then a bad turn in the weather, I never got around to pressing them. So, we decided to store them. My wife has made quite a few apple pies, apple crumbles and apple strudels over the winter, but not enough to use 100 kg. Now I have the chance to make some spring cider, so why not! 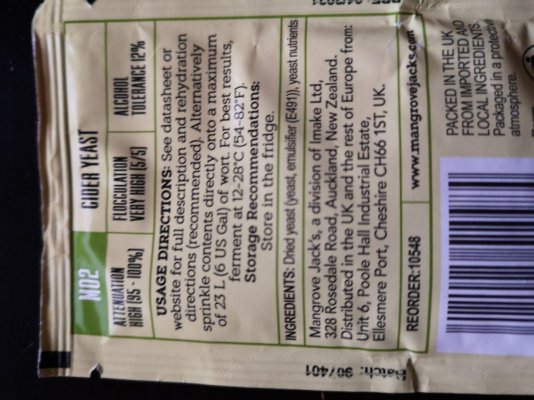 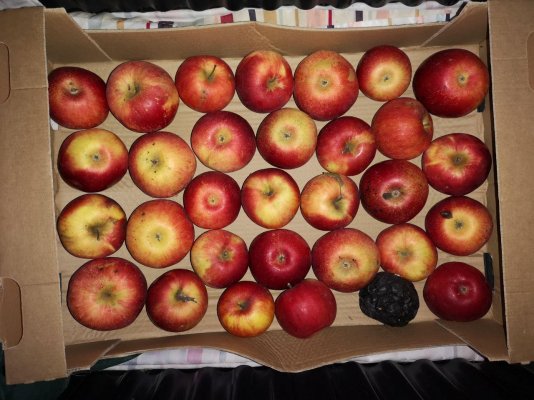 I think it's going to be great cider. Stored apples have had the time to mellow and sweeten. Don't worry about the temperature, it'll be ready when it's ready. Cider yeast isn't like beer yeast, it just gets on with the job when it's warm enough. As a matter of interest, what apple varieties did you use?
C

Thanks for all the info! I'd also bet it'll be awesome.

Pic looks like you stored them with a bit of space between and in a single layer is that right?

An Ankoù said:
As a matter of interest, what apple varieties did you use?
Click to expand...

Roughly a 50/50 mix of Jonagold and Idared. I think there were a few Kronprinz Rudolf in there too, but we ate all of them

CIsor said:
Pic looks like you stored them with a bit of space between and in a single layer is that right?
Click to expand...

Yep, each cardboard tray was a single layer of apples and then the trays were stacked on top of each other. I didn't exactly count, but maybe 15 or so trays in the box, in two columns.