abacab666 said:
Fair point, and I wasn't condoning one over the other. Rather that, if he can pardon the civilian killers, why not the ones in uniform...all or nothing? Taking away the military angle for a second, how can anyone honestly justify a bomb in a shopping centre in another country where innocent and unconnected people died and pardon those responsible?
Click to expand...

It's a very difficult subject and not one I claim to have all the answers. To pardon someone that person is normally convicted ( rightly or wrongly) of a crime. So to pardon someone in the armed forces there would need to some admission or court case to prove his guilt in the first place. That in itself is part of the problem.
Most people would like to see the truth but somehow I don't think this will happen. This would expose the amount of collusion between all three side's involved.

samale said:
ould like to see the truth but somehow I don't think this will happen. This would expose the amount of collusion between all three side's involved.
Click to expand...

Probably not in the lifetime of the people involved.

The online petition was created by Angus Scott, who is calling for Sir Tony's knighthood to be rescinded due to the 'irreparable damage' he claims the former PM caused

A petition to strip Sir Tony Blair of the knighthood given to him by the Queen in the New Years honours list has topped one million signatures.

Sir Tony, who is Labour’s longest-serving Prime Minister, was appointed as a Knight Companion of the Most Noble Order of the Garter, which is the oldest and most senior British Order of Chivalry.

The honour is awarded entirely within Her Majesty’s gift and is one that is regularly bestowed on former premier.

It is not granted on the advice of the Government.

However, the news caused outrage online, with scores of people blasting Blair for deciding to take Britain to war in Iraq.

As a result, an online petition created by Angus Scott - calling for the knighthood to be rescinded - was created, bidding Prime Minister Boris Johnson to petition the Queen to have the honour removed.

On Friday afternoon, votes on the Change.org petition surpassed one million, making it one of the top signed petitions on the website.

"Tony Blair caused irreparable damage to both the constitution of the United Kingdom and to the very fabric of the nation's society," the petition reads.


"He was personally responsible for causing the death of countless innocent, civilian lives and servicemen in various conflicts. For this alone he should be held accountable for war crimes.

"Tony Blair is the least deserving person of any public honour, particularly anything awarded by Her Majesty the Queen."

Labour Leader Keir Starmer has spoken out in support of Blair following the backlash, stating: "The last Labour government delivered enduring change from the national minimum wage to the peace process in Northern Ireland.

"My congratulations to Tony Blair on this recognition for his public service to our country." 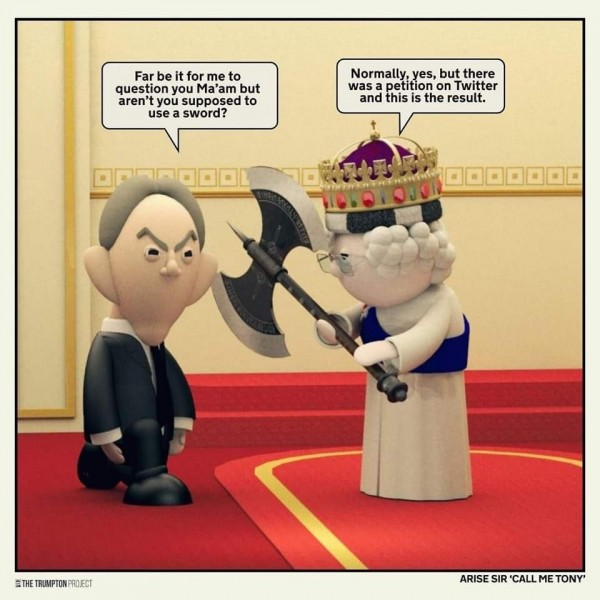 Keir Starmer: one year in, Labour leader's popularity has plunged
2 3

Tony Blair was not "straight with the nation"