So today I was at a loose end for a while and I wanted to make another brew but didn’t have much in. So knocked this up quickly from stuff I had lying around.

The must tastes of orange and vanilla (almost caramelly) and is quite nice at the moment. Will see how/if fermentation changes the flavours.

I thought vanilla and orange would be nice together as you can make cakes/buns with those flavours. 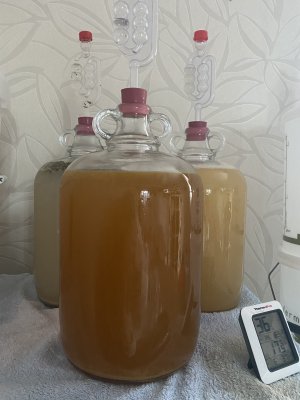 Sounds interesting. Let us know how it turns out. I'll bet if you made some of the bottles fizzy by priming them with a teaspoonful of sugar it could be quite refreshing.

I was actually considering that! Great minds! (Yorkshire!)

I’ve asked my DIL if she’ll save me her soda water bottles!

Location
Land of the Gingers

Yes, I'll second the suggestion for fizz. Could be interesting brew

I agree GB. I just hope I haven't made it too high gravity so I can still carbonate! Does anyone know the tolerance of the super wine yeast compound stuff please?

Its pretty good lots of folk have got it past 14%

Sparkling wine is a hobby all by itself,I used to make loads 15-20yrs ago when i had loads of champers bottles so could do REAL carbonation.

I used to get between 75-100psi.All were made from wine kit grape juice (no "country" ingredients.) tasted like proper champagne as well.

There is nothing stopping you using ec-1118 for the carbonation,In fact it is the BETTER option as CO2 is toxic to yeast at high pressure,same as high alcohol.!!
ec-1118 is often used professionally for this very purpose:> Using another yeast for the primary based on taste profile then carbonating with ec-1118.
When used like this the base "wine" should ideally be around 10% at the start of the sparkling process.

I think you now have enough experience to graduate to making sparkling wine.
It really is another dimension.

Re reading my post,
It was actually 20+yrs ago.!!
How time flies.

Thank you for all the great advice John. I will have a think about what I'm going to do.

Would you de-gas the smelly stuff before you added carbonation? I asked this on a cider making thread but didn't get an answer

LisaMC said:
I agree GB. I just hope I haven't made it too high gravity so I can still carbonate! Does anyone know the tolerance of the super wine yeast compound stuff please?
Click to expand...

I have another question. What if I wanted to keep it sweet? Would adding lactose ruin it? Should I use a different sweetener?

I have another question. What if I wanted to keep it sweet? Would adding lactose ruin it? Should I use a different sweetener?
Click to expand...

Sorry, I don't know. I've never tried adding lactose to wine. I know that brewer's yeasts do not ferment lactose and that wine yeasts are classified among brewers yeast, but I don't know whether other strains, bayanus for example, can ferment lactose. Many bacteria can and so can brewer's yeasts in the presence of lactase. Best wait for an answer from someone who has tried it.

To sparkle wine properly it should be at bottling stage,ie cleared,de-gassed and ready to bottle.
Obviously no sorbate.
The more common method of sparkling at the end of secondary when the wine is not clear can put too much yeast in the bottles.

Its not the easiest thing to do.But the results are spectacular.
If I still had my bottles I would make little else.

You can check it out online as the "Method Champenoise"

johncrobinson said:
If I still had my bottles I would make little else.
Click to expand...

If it's that good and you like it so much, why not just get some more bottles.
I use Lorena lemonade bottles that I bought in Waitrose about a million years ago. They're still good. The wine is absolutely crystal clear when I bottle it and it takes a good few months to condition. Méthode Champenoise is a bit tricky with its disgorging and redosing. I'm not sure it's necessary if you pour carefully.
I've got champagne bottles and Tripel Karmeleit bottles are just as strong, but they always seem to be full of beer.

Which non-fermentable sweetener do you recommend I use in my wine please @johncrobinson ? I wouldn’t be able to stomach totally or very-nearly dry wine.

You are quite right An Ankou.
I used a now ( I think )discontinued product called Sparkle tops,These were plastic tops that fitted champers bottles and had a pressure safety valve built in,Which by means of a pull cord could be manually activated on an upturned bottle for disgorgement.I inherited them unused from my late father,

The bottles I got from the chairman of the company I worked for, He was tea-total and was given bottles of Champagne at Christmas by grateful sales reps for the years business, My office at one point looked like an off-license.
The company itself had a strict alcohol policy and the offices were non-smoking.
I was the ONLY employee out of 120 souls allowed to drink and smoke at work.!!

The reason was actually quite simple my inventions as head of R&D brought in over 3million a year profit.

Back on subject
As you suggest I also found that you could carefully pour off a bottle kept upright and leave the sediment on the bottom, I could get a good 80%plus of a bottle that way.

Perhaps going the full way is a bit ambitious carbonating to cider/beer levels would be a LOT easier.

Hi Lisa,
The safest way I think is an idea posted on here by chippy tea and that is to pour a bit of syrup into the glass then top up with dry sparkling wine.
I prefer bone dry anyway so I don't have that problem.

A friends wife was horribly disfigured by an exploding pop bottle and went on to commit suicide so i have seen the results of bottle bombs first hand.

Sparkling wine..!!!
If it did not transform the drinking experience so, It would not be worth the effort-

Problem 1 is I will be giving some away and I don’t expect the receivers of my wine to have to piddle about with syrup lol.

Problem 2 is it takes a while for the syrup (in my experience) to meld with the rest of the flavours and I just don’t have the patience.

Problem 3 (and as my dad used to say) sugar is pure oxygen and it may dull down the carbonation a little bit. We used to use it to get fires going ha ha ha!

Thank you for all your help. I will find a way to use an artificial sweetener. I’ve decided against lactose though as I think it’ll be too creamy and spoil it.

I get the general principle of roughly 1.000 gravity when you add the priming sugar so I’m not going to do anything unsafe. I like to think I have my head screwed on the right way (something else my dad used to say!)

Like @johncrobinson , I prefer dry wines (I don't mind sweet dessert wines , but they invariably give me a headache) and your boredom brew is certainly going to be dry although the glycerine might take the edge off a bit.
The thing is that some wines, even though all the sugar has fermented out, don't taste as dry as others. I find my rhubarb-based wines don't taste dry- more medium-dry and I've heard that banana wine doesn't have that tartness that immediately strips the tastebuds off your tongue that some wines have. My parsnip wine, too, I recall doesn't taste "crisp" and dry, rather smooth and sort of "creamy", but with no residual taste of sugar.
While writing this, I'm beginning to realise that there's a difference in wine, just as there is in beer, between sweetness (sugar flavour) and mouthfeel (body).
If I were you, I'd experiment with lactose rather than artificial sweeteners. Bear in mind that lactose is only 0.4 times as sweet as sucrose so you'd need about 2½ times as much for the same sweetness. You could add some to, say, a couple of bottles of your wine to see if you like it and then you could still prime with sucrose (ordinary white sugar) to make it fizzy. If you don't like it you've only lost a couple of bottles.
By the way, do you use a book of recipes? It's often easier to refer to a particular recipe by a known author rather than write the whole thing out. A lot of people have still got a copy of Berry's "First Steps in Winemaking", which seemed to be the Bible in the day.

Thanks for the advice @An Ankoù! And no I don't use recipes! Stop swearing!

LisaMC said:
Thanks for the advice @An Ankoù! And no I don't use recipes! Stop swearing!

I see where you're coming from, but there's nothing better than checking out a tried and tested recipe and then completely ignoring it.

... and even then, if something goes wrong, it's the author's fault.